St. Patrick's Day means Irish pride in more ways than one in 2022 - and it's been a long time coming. 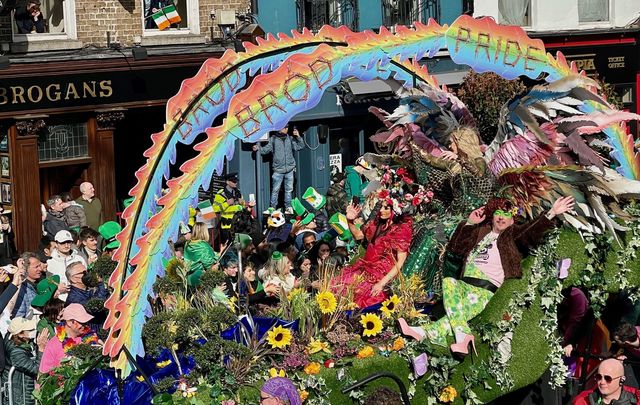 Pride on display at the 2022 Dublin St. Patrick's Day parade!

After a two-year hiatus, the St. Patrick's Day parade returned to Dublin for an epic day of sunshine, celebration, and high emotion.

Like a lot of people, returning to Ireland has been something that I have dreamed of doing for the last two years, but the lockdowns and latest variants literally stopped me in my tracks.

So when I read that this year's St. Patrick's Day parade in Dublin would feature three big entries fielded by Dublin LGBT Pride - including their first-ever floats - I knew I had to attend.

It's a measure of just how much Ireland has changed (and how welcoming it has become) that a huge LGBT Pride contingent in the middle of the national saint's parade no longer results in mass ex-communications or an instant media blackout.

Instead of jeers, I heard loud cheers as the crowd got down to KC and The Sunshine Band's "Shake Your Booty," having the time of their lives.

Just like the St. Patrick's Day parade, the big summer LGBT Pride parade in Dublin was postponed in 2020 and 2021, so the organizers simply couldn't wait to field some marchers of their own. 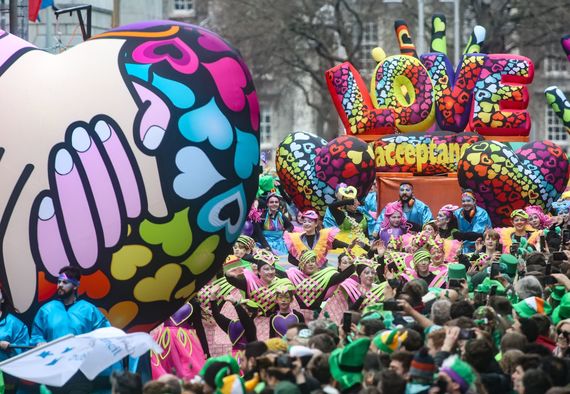 Dublin feeling the pride and love on St. Patrick's Day.

A groundbreaking plan was hatched to get a move on summer. Combining shamrocks and shillelaghs with glitter and stilettos, the first section of the debut Pride contingent fielded 81 colorful performers who made up a moving Pride flag, carrying the word “HOPE” in multiple languages to represent the universal desire for inclusion. 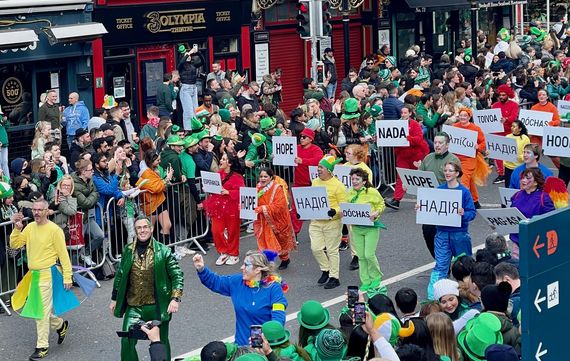 St. Patrick's Day means Irish Pride in more ways than one in 2022

The second Pride section focused on the idea of community and the participants represented the ideal of diversity, as underlined by the Rainbow Twirlers dance troupe. It was, as they say here in Dublin, gas craic.

The final Pride entry in this year’s parade represented joy, which to most LGBT people still means disco. To that end, a talented DJ served up some classic four-on-the-floor tunes as voguing drag queens in six inch heels danced around the mirrored float reading Brod (Irish for Pride) in striking club costumes from many different decades. 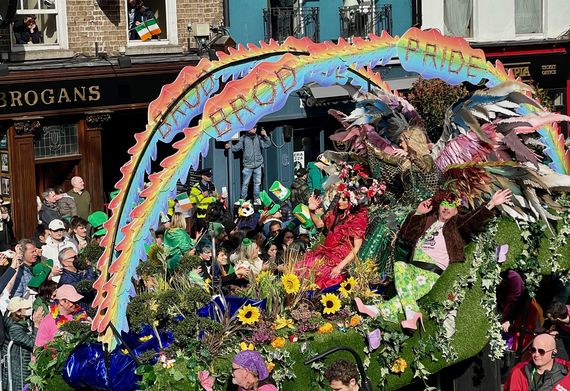 St. Patrick's Day means Irish Pride in more ways than one in 2022

The crowds along Dame Street greeted the LGBT Pride floats in the same good-humored way they had earlier greeted all the traditional Irish fiddle players and Celtic floats, with thunderous applause and general dancing.

So a word about this. This was not the Ireland that I once knew in the 1980s or 1990s. Today, pride means exactly that to young people of every orientation, it's no longer just a reflex reaction by a coldly besieged minority to overwhelming oppression. The country has come so far so relatively fast and the sight of all the changes moved me deeply.

Besides, now Dublin is a city of the young. It seems at least half the population is 25 or below and they already seem to have very clear ideas about the future of their nation.

Above our heads, huge cranes are everywhere you look on the city skyline, busy building the new Ireland whose future they will soon determine. Things are changing here, so fast.

But do they know how far Ireland's come and – after its first century as a republic - how much creative potential is finally being unleashed at last I wonder? How much do they take for granted the same things that actually startled me? At times on this trip, I felt like Rip Van Winkle. Things were so different when I was young, I heard myself thinking, sounding exactly like my late dad.

An estimated 400,000 parade-goers turned out along the long route that stretched from Parnell Square to Kevin Street, most of them wearing something green, but pride of place at the front of this year's parade was given to three young members of Dublin's Ukraine community, who carried sunflowers and held aloft the yellow and blue flag of their struggling homeland. 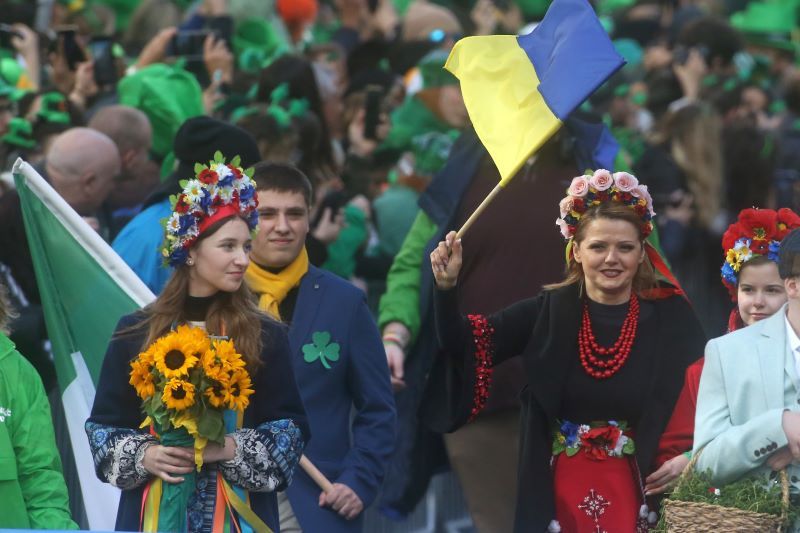 Concerns about any weakness in the Irish tourism market - due to sudden jitters over a new Covid variant or the Russian war in Ukraine - were immediately put to rest by the sheer numbers of American and European tourists checking into local hotels or dining out at all the local pubs and restaurants. 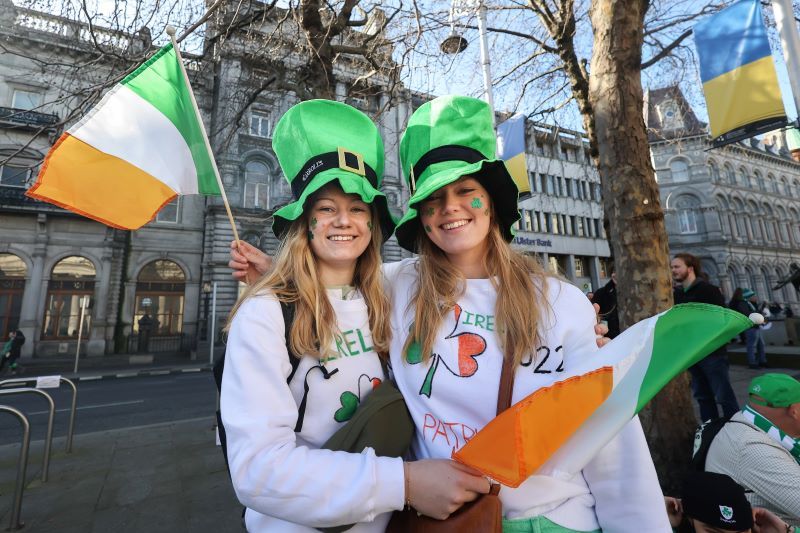 March 17, 2022: Mille Enggaard and Nanna Holm from Denmark with Irish flags as they prepare to enjoy the St. Patrick's Day parade. (RollingNews.ie

Ireland has one of the highest covid vaccination rates in the world and that knowledge has encouraged a weary public to fully participate once again in the public activities they once took for granted.

If the roof lifted off Dublin on March 17 this year, it's because people wanted their lives and their city back, and simply insisted on it.

Olympic and Paralympic gold medal winners Kellie Harrington and Ellen Keane, two legends of Irish sport whose recent wins were subdued by national lockdown restrictions, were appointed the Grand Marshals for this year’s Dublin parade, the theme of which was “Connections.”

The talented pair were greeted like conquering heroes which is exactly what they were. Their participation sent an inspiring message to all the local kids that this too could be you someday, being celebrated in your own city by your own neighbors. Connections indeed. 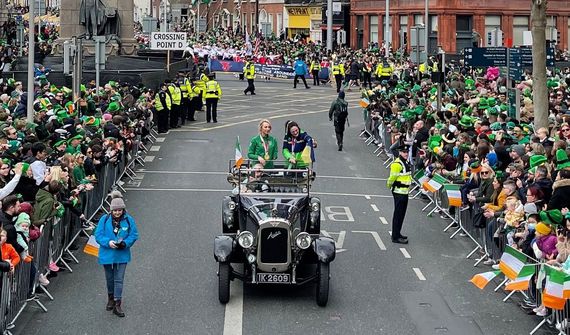 Other recent Irish changes are welcome to me. A ban on the purchase of alcohol until 4 pm on the day of the parade meant that beer-swigging revelers of yore were nowhere to be seen.

Better yet, the establishment of the St. Patrick's Festival and a “festival quarter” in Collins Barracks, where music, talks, and dancing took place every day from Wednesday through Sunday, meant that the celebration was no longer confined just to the parade, but instead, it became a wider celebration of the arts and culture of Ireland itself. Green beer was exchanged for great craic and great discussions. 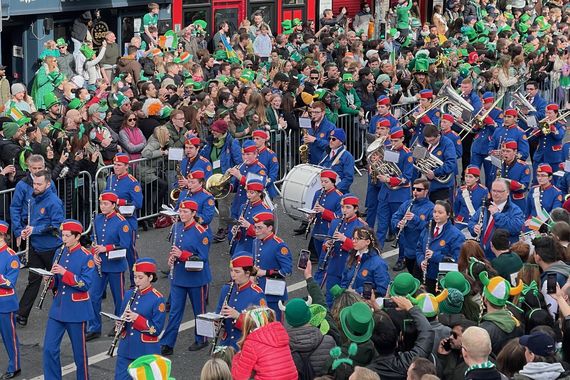 The sun forecast for the whole of the country arrived right on cue on the morning of March 17, 2022, for the first big public parade in Dublin since the Covid lockdowns took all the fun away two long years ago.

It has been no small matter, that depressing loss of fun. Lord knows, Ireland loves a hooley and the pandemic left us hooley-less. That's why there was a distinct carnival atmosphere surrounding this year's long-postponed gathering. On the street, it felt purposeful and restorative as if this were about something much bigger than just a holiday parade, which I believe it was.

Like most people, I have seen many changes in Ireland, from the glory days of Italia 90 to the first ceasefire to the Good Friday Agreement. But I think the national reimagining of what St. Patrick's Day is, who it is for, and who is welcome to celebrate it now stand among my favorite things ever about the profound changes I have seen in Ireland.