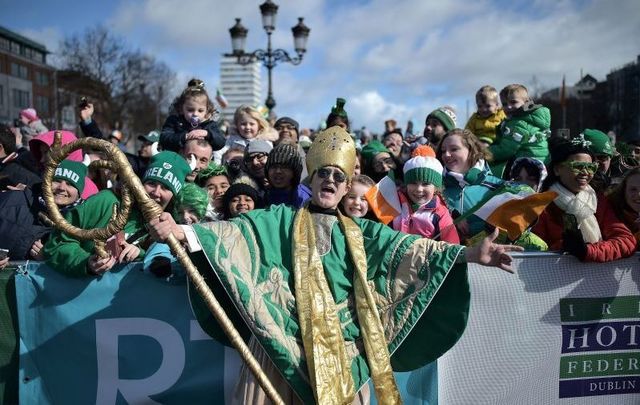 Tourism Ireland is live streaming Ireland’s National St. Patrick’s Day Parade from Dublin on Thursday, March 17 so the whole world can join in on the celebrations.

IrishCentral is delighted to be teaming up with Tourism Ireland to bring you the live stream of Ireland's National St. Patrick’s Day Parade in Dublin on Thursday, March 17 from 8 am EST / 12 PM Irish time over on our IrishCentral Facebook page.

We're LIVE from the St Patrick’s Day parade in Dublin! After a two-year hiatus, we’re excited to be back in Dublin with our hosts - Francis Brennan & Vanessa Rose Valero. Tell us, where are you watching from today? Wishing you all a Happy St Patrick's Day! ☘

Posted by IrishCentral.com on Wednesday, March 16, 2022

Winding its way through the streets of Dublin, from Parnell Square to the Cuffe Street / Kevin Street Junction, Ireland's National St. Patrick's Day Parade returns after a two-year absence, sure to delight the hundreds and thousands who will gather.

Here is a map of the national St. Patrick's Day Parade route, as well as a guide to the best attractions and events to check out over the Festival. https://t.co/NNyv17stOd#SPF22 #FéilePhádraig pic.twitter.com/06RQ5wceNH

Over the last six months, hundreds of Ireland’s most dynamic and innovative performers, musicians, designers, choreographers, pageant engineers, artists, and makers have been working on delivering Ireland’s most ambitious street Parade ever, in creativity, scale, length, and participant numbers.

The Parade, produced by Coco Content for RTÉ, will be broadcast live on RTÉ in Ireland and promises an exciting new look and feel for millions of viewers in Ireland and across the world.

The 2022 Parade will be a fresh, ambitious, bold new vision for both makers and audiences alike, with new pageant participants and bigger creative builds, featuring audience interaction and breathtaking new artistic elements, and a battalion of world-class marching bands.

The 2022 St. Patrick's Festival will be a landmark celebration, the largest in scale and ambition to date, a moment for the nation, and for our tribe of 80 million across the world, to connect and reflect, celebrate, and welcome.