The rollout of "Ireland," the new film narrated by Liam Neeson, is a reminder that, after the many hardships of the pandemic, Ireland is open to visitors once again. 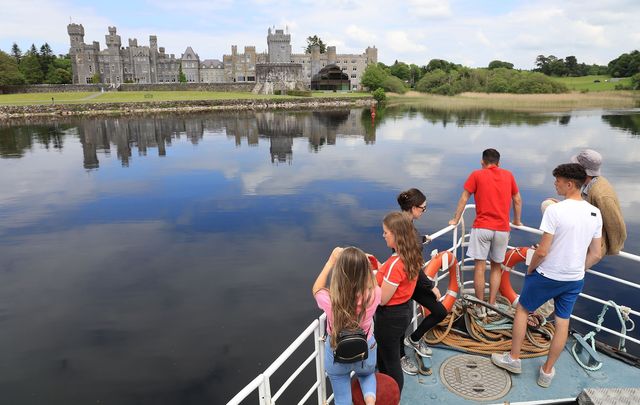 A still from "Ireland." Tourism Ireland

New York City was abuzz for the premiere of Tourism Ireland's exciting new film "Ireland," which was screened on the largest IMAX screen in America at the AMC Lincoln Square on Wednesday, March 2.

Narrated by Liam Neeson, the film follows writer Manchán Magan in the company of four Irish teenagers as they crisscross Ireland to visit some of the most iconic tourism spots on the island.

Sponsored by Tourism Ireland, the new film is directed by Shaun MacGillivray of MacGillivray Freeman Films and features immersive 3-D IMAX camera work that most tourism departments can only dream of.

“Making this film was an incredible opportunity to connect Irish Americans to their heritage and it's also a reminder that now is the ideal time to come and experience the place for yourself,” MacGillivray told IrishCentral. “I'm so excited for people to come and see it.”

The rollout of the new film – which focuses on Ireland's landscape, people, history, arts, and culture - coincides with Tourism Ireland's biggest ever marketing campaign in the United States and it's a reminder that, after the many hardships of the pandemic, Ireland is open to visitors once again.

“How do you tell a story about what's happening now in contemporary Ireland?” Tourism Ireland CEO Niall Gibbons asked the audience at the premiere. “I think this movie captures it all so well."

"The young kids are terrific, the music is there, the landscape is there, the myths and legends are there and the hope that comes from it (based on the new generation growing up in a landscape of peace) is something you just can't covey in a thirty-second commercial.”

Ireland's legendary landscapes are a recurring feature of the stunning new film, with dramatic camerawork taking us to the high peaks of Skellig Michael, that otherworldly island off the coast of Co Kerry best known to Star Wars fans as Luke Skywalker's Jedi home. 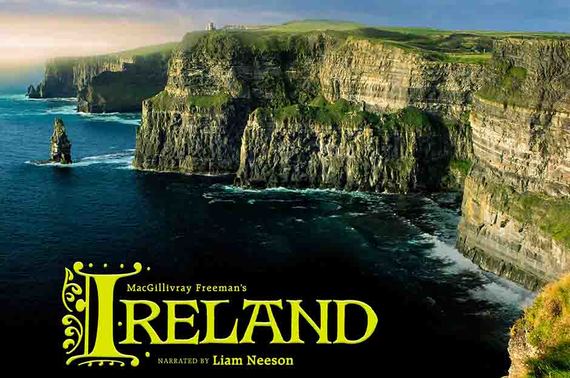 3-D is also put to great use amid the soaring vistas of the Cliffs of Moher in Co Clare, as Magan and his young charges take to the Wild Atlantic Way on a journey that teaches them more about the epic island they all inhabit.

3-D also best captures the perilous 100-foot drop under the Carrick-a-Rede rope bridge that divides the mainland from the tiny island of Carrigarede, near Ballintoy in Co Antrim, and the almost mythic landscape of the Giant's Causeway.

“There are 30 million Irish Americans that first need to learn about the island their ancestors hailed from and then they need to go back and see it,” MacGillivray continued. “We're excited to partner with Tourism Ireland to generate as much PR and marketing as we can to showcase this fantastic country.”

Turning lookers into bookers is the focus of the dazzling new film, which conveys the unique magic of the country, its friendly and informal cultural welcome, and it reminds us that it's open for business again. 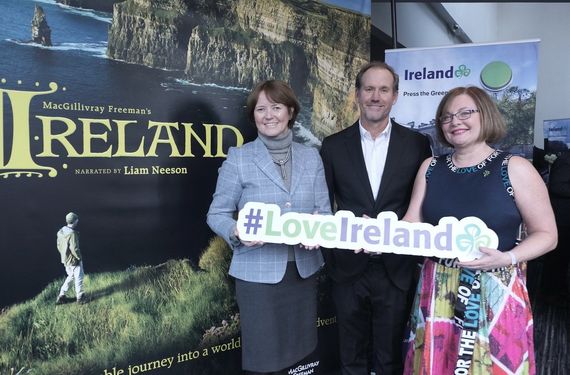 “However, we also know that there is significant competition in the marketplace; every destination has experienced the impact of COVID-19 and is now seeking its share of the recovery. Our campaigns will therefore need to punch through the noise and create an immediate desire to visit.”

To that end, Tourism Ireland's innovative new Press The Green Button campaign will get an immediate assist from the new 40-minute film, which will screen at as many of the 1,000 IMAX theaters across North America as they can book.

Alison Metcalfe, Tourism Ireland’s Executive Vice President added: “We are rolling out our Green Button restart campaign in the United States right now – encouraging travelers to start planning and to book their trip to Ireland.

"Our message is very simple: Ireland is open for business, there is good summer air access, and we cannot wait to welcome back visitors from the United States. We’re telling prospective US visitors that a warm welcome awaits, despite the disruption of the last couple of years.”

You can find your local showing of "Ireland" here.