Dublin Pride to march in Dublin's St. Patrick’s Day Parade for the first time ever

Dublin LGBTQ+ Pride says its "honored" to be marching in this year's St. Patrick's Day Parade in Dublin on March 17. 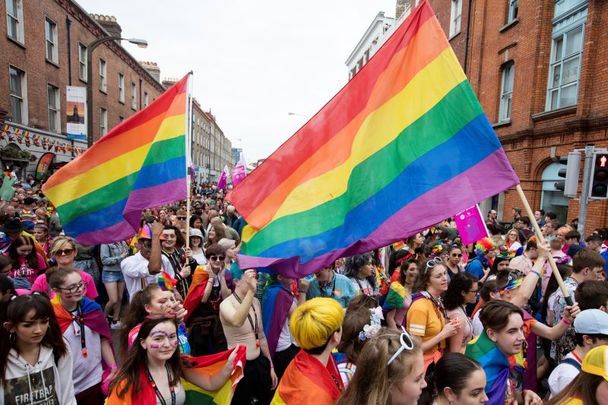 June 26, 2019: The Dublin Pride Parade arrives at Westland Row on its way to Merrion Park in Dublin CIty Centre. RollingNews.ie

Dublin LGBTQ+ Pride will be part of the St. Patrick's Day Parade in Dublin this year for the first time ever, hosting the "Inclusion" pageant company.

"Why be in only 1 parade when you can be in 2?," the organization said on Twitter this week.

We're itching to get back on the streets & couldn't wait till June, so we'll be one of the main pageants @stpatricksfest! A huge thanks to our pals at Paddy's Day for making this happen ☘️🌈https://t.co/uAlIWlMAtS pic.twitter.com/KIGRkn7iOC

Dublin LGBTQ+ Pride, a not-for-profit organization dedicated to promoting diversity and inclusion in society and championing equality for all, is best known for the annual Dublin Pride Parade which it has run since 1983.

“After two years without a parade, we couldn’t wait till June to come back," a spokesperson for the organization told GCN this week.

“We are incredibly honoured to be one of the main pageants in this year’s St. Patrick’s Day Parade, and we want to say a huge thanks to the Patrick’s Day Festival team for giving us this platform; to showcase how far we’ve come and how much further we can go still.”

At the Dublin St. Patrick's Day Parade on March 17, the Dublin LGBTQ+ Pride team will host the "Inclusion" pageant company, which will feature three key parts - 81 performers carrying placards that read "HOPE" in different languages while making up a Pride flag; a section dedicated to community and sustainability featuring the Rainbow Twirlers dance troupe; and a final portion representing "joy" with a  disco float replete with DJ, glitter ball dome, drag queens, and performers.

Pride organizers say: “Beyond protest or celebration, Pride connects people, it creates communities, and it is these communities that create spaces where everyone can be included and belong.

“Our pageant is the story of inclusion. It also references the connection between queer culture and the world of nightclubs and dance and the return of those spaces to our community."

If you would like to dance or get involved in the Dublin Pride pageant in this year's St. Patrick's Day parade, you can contact Community@DublinPride.ie.

The confirmation of Dublin LGBTQ+ Pride's inclusion at this year's parade comes as The National St.Patrick's Festival 2022 unveils its schedule which will usher in the return of in-person events from March 10 - 16. Be sure to check out the Festival's full lineup here. Tickets for a small number of paid events will go on sale this Friday, February 11th at 9 am (GMT).