Rosaleen Crotty proudly shares the St. Patrick's Day matchmaking plot she worked on to get Julie and Pat to their happily ever after. 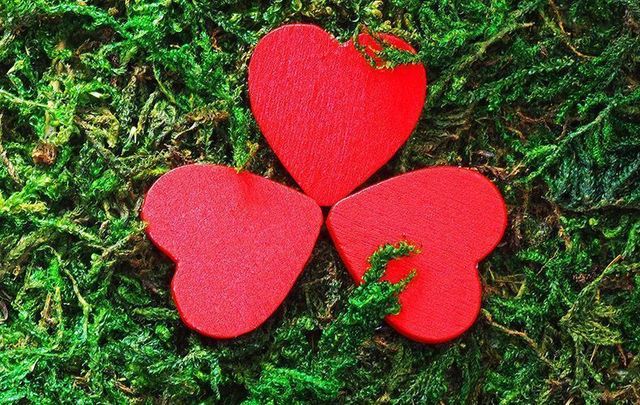 Love bloomed for one couple at St. Patrick's Day party in New York City - thanks to a bit of hard work! Getty Images

Thinking about Pat and Julie and their two beautiful and not unintelligent daughters now, it all seems so normal. It is as if Julie and Pat´s meeting and subsequent marriage in 2012 and then adopting their daughters as pre-teens some three years later all just happened, as if it was all destined by fate.

Well, at least where the meeting up part is concerned, it was most certainly not just destined by fate - it was hard work. Darn hard work.

Getting Pat and Julie to pair up required a lot of planning, intrigue, and effort from 11 people. And now I myself freely take 89% of the credit for this happy union.

It all started on the evening of August 14, 2003. No, Pat and Julie did not meet then. But that was when I met Julie for the first time, in Gantry Plaza State Park, Long Island City, New York.

Alert readers will note that August 14, 2003 was the date of what I call the "Happy Black Out" in New York City. New York citizenry, discovering it was only an abundance of technical and human error and not anything more sinister that caused the blackout, all sighed a collective sigh of relief and went into party mode for the duration of the blackout. Self included.

So that evening, I strolled down to Gantry Park to enjoy the rare view of Manhattan in total darkness. A pleasant woman nearby, down in the park for the same reason, stuck up a conversation with me. After some minutes of bla-bla with the stranger, I turned to go home.

As I was leaving, the stranger called out: "Nice to talk to you, my name is Julie, Julie Crotty." Well, I did a double-quick turn for my name is Rosaleen Crotty and I had never met another Crotty in this world that was not a cousin of mine.

A friendship was struck up quickly, helped by the fact it was hurling final season. I invited Julie to join me to watch matches live at some local Irish pubs. Between games, I learned that Julie was from Chicago, worked in New York, lived in Long Island City, was lesbian, studied law, and worked as a lawyer. And, no, at that time, she was not dating anyone. All that information was stored in my head.

Sometime shortly before Christmas, I was meeting with Susan and Renee, two fellow members of the local community gardening group as I was wont to do. In the course of these chats the two women, who were a couple, referred on occasion to one Pat with whom I was acquainted and who lived in the same building we three lived in in Long Island City. Pat was not in the gardening group.

Finally, it dawned on me….

"Is she in a relationship?" I asked.

"No, but she is not interested. She´s just got out of a relationship and wants to focus on work for now," was the reply.

"Nonsense," says I, "I know a very nice woman who is not in a relationship. I think they would make a very good pair," says I again.

"No, Pat is really not interested, we tried to set her up, but she is just too busy," was the reply.

"But 'my person' is very busy too," I protested, "so if they are both busy people it would be ideal; they would never have enough time together to argue. This could indeed be the perfect relationship," says I again.

The gardening group ladies both agreed that this was indeed a valid argument. However, they said they knew Pat would not be cajoled into a blind date or anything like that, so it would have to be a "spontaneous meeting."

But nothing happened to bring Pat and Julie together; one or the other was always too busy to turn up at whatever event was planned to have them meet each other.

St. Patrick´s Day 2004 was nearly upon us and still, there had been no success in even getting them to meet. Urgent action was needed before one of the women got involved in a relationship with someone else. (That was bound to happen as both women just happened to be very nice members of the human race. Oh, did I say fine looking successful women too!)

So I, for whom inviting someone for a cup of tea and a bun was a big deal, decided I was going to do something drastic: I would host a St. Patrick´s Day Party for the sole reason of getting the two to meet. So back to the two women in the gardening group to plot.

The date was set; no invitations were sent out, but a group of 25 people was specifically picked to come to the party with our secret task in mind; just seven of the chosen guests were advised of the ruse. These seven were told to try and draw Pat and Julie together in conversation, then they were to withdraw if they saw Pat and Julie actually getting into a conversation.

So the stage was set, the party proceeded. All key players did what was expected of them. Julie and Pat were introduced!

However, nothing seemed to be clicking between them. The evening went on. (And, if I may say so, a nice evening it was too.)

Eventually, my two friends from the gardening group left with Pat and Julie and three or four other women. Off to play Balderdash together, they were. "Good," I thought, " a modicum of success at last."

A report from the gardening ladies the next day - Great fun but nothing tangible happened between Julie and Pat as far as anyone could surmise.

"What now! Was that all for naught?" I sighed.

Some weeks later, Julie invited me to her birthday party.

"Delighted to come," says I.

"Perhaps Pat, the woman in your building that I met at your party, might like to come too," says she.

"I can ask and that would be great, as it would mean I would have a lift too," says I, delighted, for we finally had something – though what we had, I was not sure what.

Pat agreed to come. I pointed out she could not change her mind, as I would have no other lift home from the party arranged.

We arrived; apart from polite courtesies, I could see no connection between the two. I met Julie´s sister at the party.

"Hello," says I. "My name is Rosaleen, sorry for being so up front here, but I do need your help. A lot of us have put in a lot of effort to hook your sister up with Pat X, the woman who drove me here. Nothing is happening, have you any suggestions?"

Déjà vu all over again! Julie´s sister furtively told a few of the guests to try and get Pat and Julie talking to each other. Three hours and lots of fun later, there was still no sign of a connection.

Pat suggested it was time for us to go home. Julie, gracious host that she was, guided us to the door. Alas no success – again. Dejected, I went to the bedroom to get my coat. Coming out, I saw Pat and Julie in conversation as they waited for me – they were talking about the life size cut out of Xena the Warrior Princess just behind the door of the apartment. Oh joy oh joy, they were talking, and most animated.

Oh panic, how can I keep this going? So I "lost" my front door key. As a few people helped me look for my key the two kept talking and talking. A connection at last. Oh joy, again.

Pat said nothing about Julie going home in the car. Perhaps I had misunderstood.

A few weeks later, I met the pair from the community garden group to tell them about my second failed attempt.

"No you are wrong," says one of the women, "they did connect!"

"No," says she again, "but we haven´t seen or heard from Pat for weeks. That means only one thing, she is meeting someone and is not ready to talk about it yet. And we think that someone is Julie,"  says she again.

A few weeks later, Pat told the gardening ladies that she had started dating the woman she first met at the St. Patrick's Day party. The ladies smiled demurely at her and said. "Oh, that´s nice."

A short time later, Julie told me that she was dating Pat. I smiled demurely and said, "Oh that´s nice."

And the rest, as they say, is history.

*Thanks to Rosaleen Crotty for sharing this love story ahead of both Valentine's Day and St. Patrick's Day! Have a story you want to share with IrishCentral? Sign up for our contributors network IrishCentral Storytellers here!