Another big celebration for Irish boxer Kellie Harrington this year as the Olympic gold medalist confirms her engagement to longtime girlfriend Mandy Loughlin. 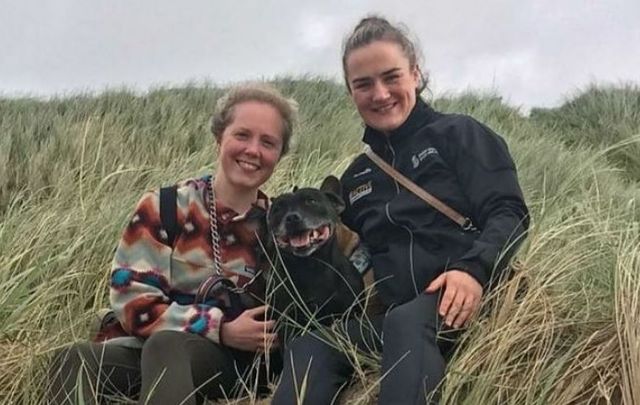 Kellie Harrington and her fiancée Mandy Loughlin during a recent trip to Killybegs in Co Donegal. @kelly_harrington14, Instagram

Kellie Harrington has confirmed that she is engaged to her longtime girlfriend Mandy Loughlin and that the duo is set to wed in just three months.

Harrington wrote in a recent Instagram story: “Wedding planning for a wedding that is 3 months away is definitely STRESSFUL.

“No venue, not a stitch of clothes, not knowing who to invite or where to bloody start.

“When people said planning a wedding is stressful I never believed it til now,” Harrington wrote with a laughing face emoji.

Tagging her fiancée Loughlin, Harrington added: “Working under pressure is what we’re used to I think???”

Indeed, Harrington is used to a bit of pressure. The 32-year-old Dublin native became Ireland's newest Olympic gold medal winner back in August when she won the women's boxing lightweight division at the Tokyo 2020 Olympic Games.

Harrington and Loughlin have been an item since 2009, so a walk down the aisle isn't too much of a surprise.

Speaking with Ryan Tubridy on RTE's Radio One back in August, Loughlin explained how the two met.

"We met 13 years ago boxing and she used to have to trek over to Bray to train where I was training at the time," Loughlin said. "We just met there and clicked, and the rest is history."

Loughlin did admit, however, that a north inner-city girl like Harrington and a southside girl like herself "might just not get on straight away, but opposites obviously attract and it was just the best thing ever."

Adorably, Loughlin still gushes about her longtime girlfriend. She told Tubridy: "It's so rare to find everything that Kellie has together."

She continued: "The things she does, it's just unbelievable. She just gives back so much to people."

"She brings 110% to whatever she does," Loughlin added, "She brings the craic, she just brings passion and excitement.

"If you meet Kellie and you're talking to her, the energy - she just makes you want to be a better person," Loughlin added.

Back in September, Harrington shared these sweet snaps of her and Loughlin during a trip to Killybegs in Co Donegal on Instagram: