It was a triumphant return to Fifth Avenue for the NYC St. Patrick’s Day Parade for most Irish - but not all, as a number of groups that were due to step off towards the end of the march were denied the chance to do so. 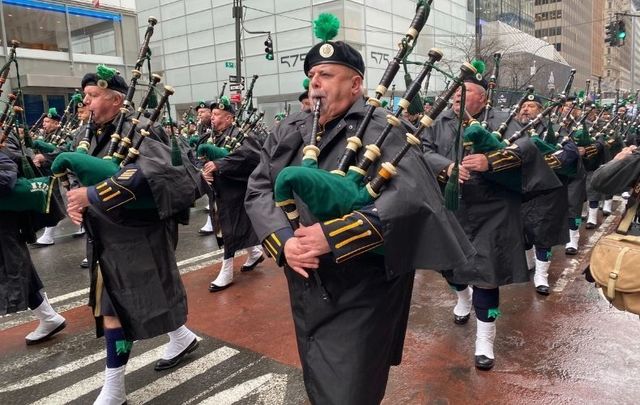 This year’s New York City St. Patrick's Day Parade, back in action after a two-year pandemic absence from Fifth Avenue, was minus 70 marching bands and other annual participants who were unable to make travel plans in advance because of uncertainty around Covid. And some groups that marched this year did so with reduced numbers in their ranks.

Another complicating factor that resulted in confusion and large gaps at the end of the parade was the late withdrawal of marching units, some of whom did not notify the parade’s leadership in advance of their absence. As a result, the parade moved along much quicker than in prior years, and when 3 pm approached, city workers placed barriers on the side streets where marching groups assemble.

A well-placed source with the NYPD told the Irish Voice, sister publication to IrishCentral, that the parade’s permit, good until 5 pm, would have stayed valid until that time regardless of the lack of marching units, and that the NYPD did not make the decision to shut the march down before that. In prior years, the source pointed out, the parade has finished later than 5 pm and the NYPD had no problem with letting the march run past time.

Parade officials issued a statement on Monday which addressed what happened at the back of the line of march.

“This parade marked the largest public event in the world since the beginning of the pandemic and allowed us to honor first responders, essential workers, and the Irish American labor movement," the statement said.

"Producing a major event like this post-Covid was not an easy feat. However, with the help of parade volunteers, it was able to happen.

“Due to small turnout in many marching groups, lack of bands returning due to Covid restrictions for rehearsal and travel in the prior months, the dire weather forecast, and excessive rainfall, the parade ran far ahead of schedule towards the end. This unfortunate and unpredicted sequence of events impacted the timing of groups at the end of the parade.

“While the parade had a permit to hold the parade until 5 pm, some city workers took upon themselves to erect barriers at about 2:45 pm over the strong objections of the parade formation group. This resulted in difficulty getting groups onto Fifth Avenue at that time and also resulted in a couple of organizations’ inability to march.

“The parade organizers have contacted and addressed the issue with most impacted organizations and will address the issue of erected barriers with the proper authorities to ensure this never happens again.”

Enjoy this highlight reel from the 2022 St Patrick's Day Parade!

Among the organizations that didn’t get to march was the Sligo Association of New York. A source told the Irish Voice that the unexpected earlier start time meant there weren’t enough people on hand to hold the group’s banner, and that steady rain also kept participants away. A number of officials from Sligo County Council had traveled to New York to attend St. Patrick’s events, including the parade, and “they are very disappointed,” the source said.

Making matters worse, at the Sligo Association’s dinner dance on March 12 at Manhattan Manor, all the guests at one of the tables contracted Covid. The 17th wound up with a few Sligo stalwarts marching on the sidelines of Fifth Avenue without their banner or flags, to keep their tradition alive. The association was back out for Saturday’s march in Yonkers, and Sunday’s parade in Pearl River.

Other sources said there was much scrambling among the units at the back of the march to get their groups together, and those that made it onto Fifth Avenue did so in some cases with just a handful of participants.

On Tuesday, Lavender and Green Alliance founder Brendan Fay said that despite the hectic late afternoon activity at the parade, he and his Irish LGBT group, which was finally admitted to the line of march in 2016 after years of struggling for a place, were happy to be on Fifth Avenue.

“Usually we step off later than scheduled. Not this time. Weather brought a soft rain for the day. Suddenly at 2:45 pm, members of the committee came over and asked us to move quickly onto Fifth Avenue,” he said.

“By then we were a small contingent with people f rom all five boroughs. The rest of our contingent arrived after we were already on the avenue. Despite rain or Covid the afternoon crowd on both sides of the avenue cheered our group. Parade committee members extended a warm welcome and parade chair Sean Lane joined for a picture.”

Parade officials are promising a return to more normality in 2023.

“The parade owes a huge debt to the 69th Regiment, bagpiper Joe Brady, and our volunteers who ensured that we were able to hold a parade these past two years during Covid. The parade looks forward to a bigger parade in 2022!” the statement concluded.