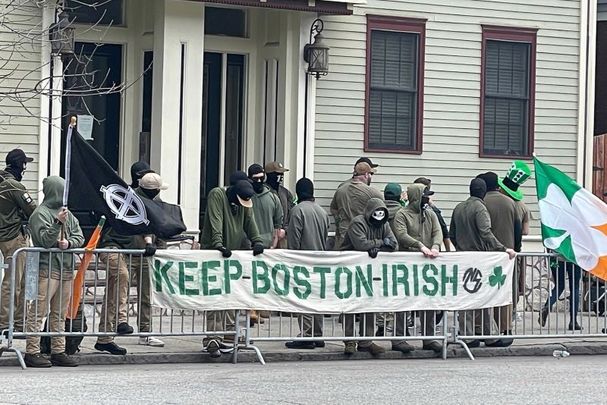 A picture of the neo-Nazi group with its "Keep Boston Irish" banner at the South Boston St. Patrick's Day Parade on March 20, 2022. @SaraXinyi, Twitter

One couple helped shut down the neo-Nazi stunt at the South Boston St. Patrick's Day Parade that has since been condemned by parade organizers and politicians.

On the day of the parade, Twitter user @SaraXinyi shared a photo of the group who had hung a "Keep Boston Irish" banner over a barricade along the parade route on West Broadway.

The Boston Globe reports that the group wore insignia for the Nationalist Social Club / NSC 131, which is described as a neo-Nazi group by both the Counter Extremism Project and the Anti-Defamation League (ADL).

“These spectators were neither invited, nor welcome at our parade, which is an inclusive celebration and not at all a place for hate and division," Dave Falvey, the Commander of the South Boston Allied War Veterans Council and President of the South Boston St. Patrick's Day / Evacuation Day Parade, told IrishCentral on Tuesday afternoon.

“As a Jewish American, it hits especially close to home for me. Unfortunately, we only have control over who can participate in the parade and cannot control who attends.

"Such groups will never be welcome in any capacity at the South Boston St. Patrick's Day / Evacuation Day Parade.”

"We need to stand up to hate"

Husband and wife Rod Webber and Lauren Pespisa, who closely follow the rise of far-right groups, said that they had a hunch that the neo-Nazi group would be at Sunday's parade.

Webber told IrishCentral on Tuesday afternoon that they made their way to the parade "to let them [NSC] know what we thought of their continued harassment of the city for the past few months-- and years, when it really comes down to it."

"NSC-131 is a violent neo-Nazi organization with very little to do with Irish culture at all," Pespisa told IrishCentral.

She believes that the group has been "on an active recruiting spree the past few months" and that they were at the South Boston St. Patrick's Day Parade on Sunday "just to recruit and grow their numbers."

Indeed, a video filmed by NSC has since been shared online which shows members of NSC 131 handing out fliers; one flier reads "if you love your heritage and your city, join us!" while another reads, "above all, we stand for the security and prosperity of white New Englanders."

The video also shows some NSC 131 members shaking hands and posing for pictures with other parade-goers, as well as police officers in the parade riding bikes past the group and their "Keep Boston Irish" banner.

Pespisa told IrishCentral that she found it "extremely troubling" that the neo-Nazi group remained there "unbothered for at least an hour" until she and Rod showed up.

She said, however: "I was very happy to see that once I arrived with a sign that well, called the Nazis Nazis, the crowd was very responsive in jeering at them until they left."

Pespisa shared this picture on Twitter with her sign that she and Webber had brought along to the parade:

If you see a nazi, taunt a nazi. The crowd will follow. And they will run. #FuckNSC131 pic.twitter.com/DqsMR71Nc5

Webber, a filmmaker who documented the rising problem of far-right groups in America in his movie “2020: The Dumpster Fire," shared on Twitter shocking footage of him and Pespisa confronting the group as they were leaving the parade.

Some of the members of the neo-Nazi group can be seen in Webber's video wearing both NSC insignia and the Irish flag.

"We continue to escort them away, taunting them, as we always do," Pespisa told IrishCentral, "but since their numbers are growing they are more inclined to attack us than they were before."

The video shows the interaction turning violent before breaking up. (Warning: graphic language)

The video confirms it all.

How long will the City of Boston just keep letting this go on, @MayorWu?pic.twitter.com/SBlWN61Jfy

"It’s extremely important to call out these Neo-Nazi hate groups," Pespisa added, "because as they get confident they will plan targeted attacks on people. We need to stand up to hate.

"It’s an embarrassment to Boston that it took Rod and me to drive them out, not the hundreds of people at the parade who saw them."

Boston police spokesman Sergeant Detective John Boyle told The Boston Globe on Tuesday evening: “We were aware that they [NSC] were present and we will conduct follow-up investigations."

Elsewhere, Sully's Brand, the makers of the distinct white shamrock flag that the group was pictured hosting at the parade, has responded saying that they "emphatically denounce this group and their cause."

They added: "Irish immigrants were not met with compassion and acceptance when they first came here in the 18th century and the notion that we should repeat that prejudiced behavior is ridiculous and disgusting."

Sully's Brands has donated $200 to the Anti-Defamation League and said it will send a free Irish flag to anyone who can show proof of donation to the ADL by this Friday, March 25.

"We can and should always strive to do better."

The Boston Globe reports that Mayor Michelle Wu, who marched in Sunday’s parade, said in a statement that the display was "deeply disturbing."

Mayor Wu said: “With the growing intensity of white supremacist groups nationally, we are working closely with law enforcement at all levels — Boston will not tolerate hate crimes, and we will not be intimidated in our work to build a city for everyone.”

Five other Boston politicians signed their names to a letter condemning the neo-Nazi display, describing it as "disgusting" and vowing to work with Massachusetts State Police, the Boston Police Department, and Human Rights Commission to ensure a thorough investigation is completed.

“Their ideology is repugnant and contrary to an event that celebrates our proud immigrant history and is enjoyed by children, families, and people of all ethnicities and backgrounds.