Brendan Fay to step down from Queens St. Pat’s For All parade

Founder of the all-inclusive St. Pat’s for All parade in Queens, Brendan Fay, has stepped aside from the historic march in order to focus on other projects. 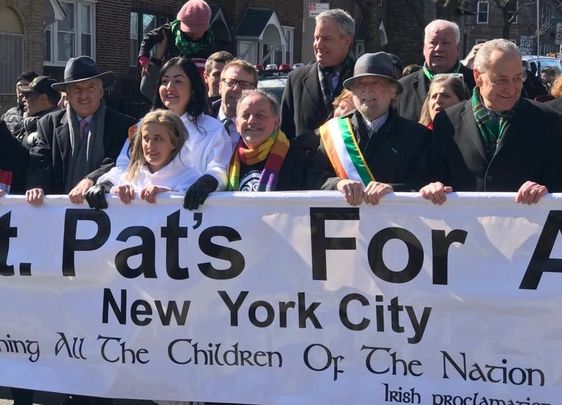 Brendan Fay, the founder of the St. Pat’s for All parade in Queens which has welcomed groups of all persuasions since its first march in 2000, has stepped down from his position as chairman to “focus on other things.”

Fay, a native of Drogheda, County Louth, founded the all-inclusive march in response to the ban on Irish LGBT groups marching on Fifth Avenue in the annual St. Patrick’s parade.  Taking place on the first Sunday of every March, St. Pat’s for All has attracted major politicians in the five boroughs, statewide leaders and members of the House and Senate. In 2000, the first year of the parade, then New York U.S. Senate candidate and First Lady Hillary Clinton made her first appearance at an Irish parade when she took part in St. Pat’s for All.

Much has changed as far as St. Patrick’s Day parades are concerned since the founding of St. Pat’s for All.  Fay’s Lavender and Green Alliance LGBT group was finally permitted to take part in the Fifth Avenue parade in 2016; other marches in New York, with the exception of the main one in Staten Island, also welcome Irish LGBT banners.

Now, Fay says he feels the time is right to pass the baton.

“It was a tough decision for me but it felt like the right moment,” he said.  “We’ve seen the change. When I had the idea for St. Pat’s for All back in 1999 it was in response to an issue in our community. I will always be proud of how change came about.

“It’s a huge decision for me, but I’m taking it with a sense of gratitude for the people I’ve met over the years.  St. Pat’s for All came out of the Irish LGBT community being excluded and protesting, and the way out of that was being open and inclusive. That’s the language we always used.”

The annual St. Pat’s for All parade will continue – this year’s event is set for Sunday, March 6 – with co-chair Kathleen Walsh D’Arcy at the helm.  Grand marshals for the parade, which took place virtually last year, have not yet been named. 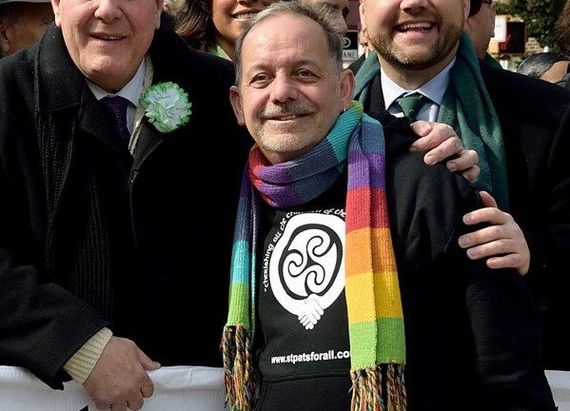 Brendan Fay, Founder of the St. Pat's For All parade.

Speaking with the Irish Voice, Fay recalled meeting with former New York City Council Member Danny Dromm at Donovan’s pub and restaurant in Woodside in 1999 to flesh out his idea of a new St. Patrick’s parade in Queens that would welcome all groups wishing to celebrate Irish heritage, regardless of their background or sexual orientation.

“Danny thought it was a great idea. We decided to run with it,” Fay recalled.

Organizational meetings were convened every week in the home Fay shares with his husband Tom Moulton, and many community leaders stepped up with financial support and a presence on the day.

The 2000 march was a big success, attracting significant media coverage both for the historic nature of the event and Clinton’s presence.  There were protestors on the sidelines as well, but Fay and the committee members were undaunted.

“I remember the police coming to me that first year and saying that there were a group of opponents kneeling down on the street saying the Rosary. They asked about arresting them but I said no, ask them if they would like to join the march as a Rosary contingent. I remembered what it was like to be involved in protest,” said Fay, who had been arrested several times during March 17 protests against Irish LGBT exclusion on Fifth Avenue.

St. Pat’s for All has continued to grow each year, and Fay’s hope is that will get even bigger.

“I have come to appreciate how important community parades are both culturally and how they can help make a real difference,” Fay says.

“I’ve often said no people, no parade. St. Pat’s for All grew because of all the local support, and its impact in forcing change can never be denied.”

Fay will continue to make documentary films – his most recent one was about the late Father Mychal Judge, the FDNY chaplain who was the first recorded death on 9-11 – and curate exhibits, with two planned for the Irish American Heritage Museum in Albany later this year.  He can be reached through his website, lavenderandgreenalliance.org.

“It’s important to let people run with St. Pat’s for All now and take it to a new place.  And I’ll always be hugely proud of what it’s already achieved,” Fay said.