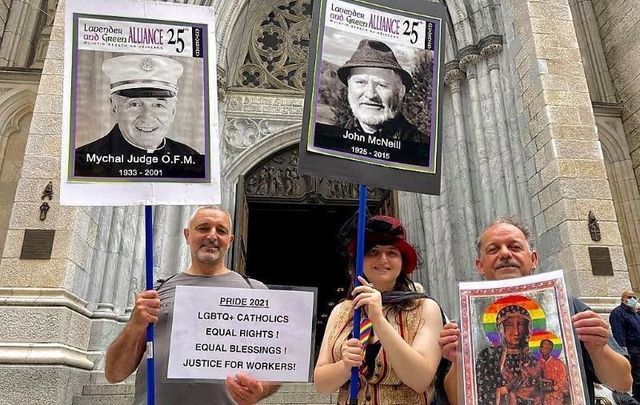 PRIDE 2021 -- from morning till night, I'm crisscrossing the city meeting friends and activists at different Pride events and gatherings. There are rainbows everywhere of course and as many young people.

Some tell me they have traveled long distances to participate in New York Pride in some way and to visit the Stonewall. For others, it’s their first Pride day as an out and open queer-trans person.

Good to see Randy Wicker and some of the other early movement pioneers, to give a hug, to say thank you again. Rick Landman, who worked to get an LGBT group in the Steuben parade, and had his memoir recently published.

Covid is still a reality that impacts. We wear our masks on the subway.

Here in New York, there are intense ongoing conversations about Pride and its meaning and expressions. Parades and gatherings are such vital expressions of our visibility, our remembering, and call to activism.

I see friends from the Polish community. Faith groups are here. The downtown Judson Memorial Church celebrates movement “saints.” For a while, I join with my friends from the nuclear disarmament campaign (International Queers Against Nukes).

In New York, our local NYCAN campaign continues to get the legislation (introduced by City Council Member Danny Dromm) voted by the speaker and council to divest city pension funds from nuclear weapons production. I have been researching the stories of LGBT pioneers of the global disarmament movement.

It’s a day for thanks, raising the rainbow, for diversity, for remembering, for hope, and extending the hand in welcome.

In 1984, Dignity NY won a legal right to be at St. Patrick’s Cathedral for 30 minutes each Pride Sunday for prayer and witness. The community has continued that annual tradition of visibility.

As people came out after Mass, they looked a bit stunned at our LGBT Catholic group behind the Dignity banner, a gift of Gilbert Baker. The sounds of our singing echoed across the city avenue and through the open doors of the cathedral. "We shall overcome, all are welcome, Ubi caritas..."

We held signs and chanted, “Equal rights! Equal blessings! Justice for workers!” We called for an end to theologies that discriminate and exclude.

Holding up the beautiful icon of the Rainbow Madonna, Mary, mother for ALL including LGBTQ persons, we extended thoughts and prayer of global solidarity to LGBTQ brothers and sisters in Poland, Hungary, and across the world.

Most passing by waved and gave thumbs up. Many wanted pictures. They said happy Pride, keep going.

At noon we hugged farewell, on to continue the work and celebrations of Pride across the city.