Irish LGBT activist Brendan Fay spoke during the grand opening of the Staten Island Pride Center on May 22, the anniversary of Ireland's referendum on same-sex marriage. 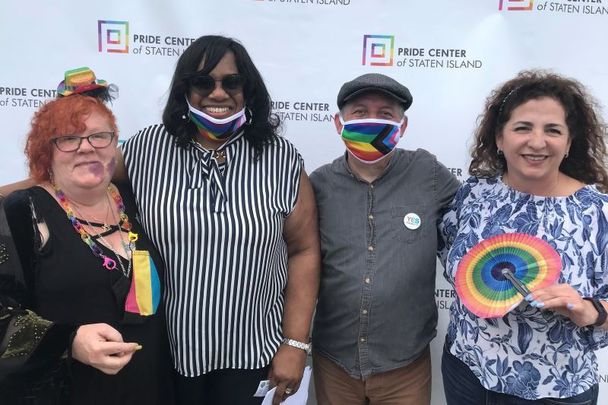 In remarks at the May 22 opening of the new Pride Center on Staten Island, guest speaker Brendan Fay highlighted the significance of the date for human rights and the LGBT community.

The crowd gathered on Willow Avenue cheered and celebrated.

Fay, the Irish-born gay activist living in New York and founder of the Lavender and Green Alliance, also spoke of the Civil Marriage Trail Project which he founded in 2003 with Jesus Lebron bringing couples across the border to Canada.

We are so excited for our Grand Opening for our new location located at 66 Willow Avenue SI, NY 10305. We would like to welcome our partners such as Community Health action a Staten Island, La Colmena, Aids Healthcare Foundation, NYPD, Richmond County District Attorneys office and many more! We are so happy to expand our footprint to serve more residents of Staten Island, the new facility will allow us to provide more programs for youth, seniors and everyone in between.

Posted by Pride Center of Staten Island on Saturday, May 22, 2021

On May 22, 2007, Edie Windsor crossed the border with Thea Spyer for legal marriage. She eventually took her case to the U.S. Supreme Court overturning DOMA (the Defense of Marriage Act) and making legal marriage available for same-sex couples.

Across the world, LGBTQ communities were also remembering Harvey Milk’s May 22, 1930 birthday. Milk was among the early openly gay elected officials in the U.S. He was murdered in November 1978. A frame on the wall of the Pride Center entrance recalls his words, “All young people, regardless of sexual orientation or identity, deserve a safe and supportive environment in which to achieve their full potential.”

May 22 - RAISING THE RAINBOW AND OPENING THE DOORS OF PRIDE. It was a glorious day on Staten Island with the opening...