Irish and Irish American LGBT activists in New York City are hoping that NYC Pride will reverse their decision to ban the NYPD. 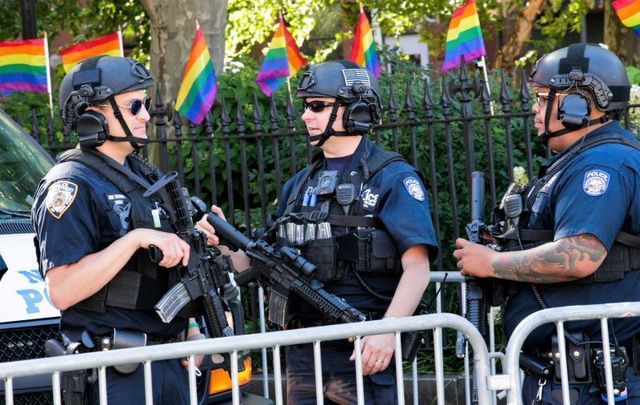 NYC Pride, the biggest LGBT celebration in the US, has banned the NYPD and other law enforcement officials from its march through 2025, and those involved in the long battle to secure a place in the New York St. Patrick’s Day parade for Irish gay groups are not happy with the move.

The decision by NYC Pride organizers to ban the NYPD and other law enforcement officers from Pride events until 2025, including marching in the parade behind their own banners, has been strongly criticized by Irish American LGBT leaders who for decades led the fight for gay inclusion in the New York City St. Patrick’s Day parade.

Brendan Fay, a native of Co. Louth, founded the Lavender and Green Alliance in 1994 and for years fought for Irish gays to be included in the Fifth Avenue parade with their banner which happened for the first time in 2016. Fay and his allies protested the banning of Irish gay groups from the march – a few of those years included arrests – and in 2000, Lavender and Green founded its own all-inclusive St. Patrick’s march in Queens which exists to this day and welcomes all who wish to celebrate Irish culture.

Fay told the Irish Voice that he believes inclusion is the way to bring about progress, and excluding the Gay Officers Action League (GOAL) from NYC Pride events will do nothing to bring about police reforms.

“I am heartbroken. This is a case of our community doing the exclusion of our own. It is a regrettable decision that impacts lives of my friends in the Gay Officers Action League, their children and their families now informed they are excluded and banned from New York City Pride,” Fay said.

“For many of us in the LGBTQ community, the annual New York Pride march was where we came out, found community, grieved together during the AIDS crisis, hoped together, and learned principles of activism, cultural inclusion, and diversity. Now with the decision of (organizers) Heritage of Pride to exclude members of GOAL, Pride 2021 has become an event highlighting exclusion.”

On May 15, NYC Pride issued a statement that said it sought to create “safer spaces for the LGBTQIA+ and BIPOC communities at a time when violence against marginalized groups, specifically BIPOC and trans communities, has continued to escalate.

"The sense of safety that law enforcement is meant to provide can instead be threatening, and at times dangerous, to those in our community who are most often targeted with excessive force and/or without reason.

"NYC Pride is unwilling to contribute in any way to creating an atmosphere of fear or harm for members of the community. The steps being taken by the organization challenge law enforcement to acknowledge their harm and to correct course moving forward, in hopes of making an impactful change.

"Effective immediately, NYC Pride will ban corrections and law enforcement exhibitors at NYC Pride events until 2025. At that time, their participation will be reviewed by the Community Relations and Diversity, Accessibility, and Inclusion
committees, as well as the Executive Board. In the meantime, NYC Pride will transition to providing increased community-based security and first responders, while simultaneously taking steps to reduce NYPD presence at events."

Effective immediately, NYC Pride will ban corrections and law enforcement exhibitors at NYC Pride events until 2025. At that time their participation will be reviewed by the Community Relations and Diversity, Accessibility, and Inclusion committees, as well as the Executive Board

New York City Council Member Daniel Dromm, chair of the Council’s Irish Caucus who also led the efforts to include Irish gay groups in the city’s St. Patrick’s Day parade, is also not in favor of NYC Pride’s move to push gay law enforcement members to the sidelines.

“I don’t think the exclusion of a pro-LGBTQ group is the answer to the problem of police accountability. I am not shy about holding the NYPD accountable. We must continue the dialogue,” Dromm told the Irish Voice.

“The pain of exclusion is something I’ve experienced personally having not been allowed to march behind an LGBTQ banner in the St. Patrick’s Day parade for 25 years. Members of the GOAL have fought for LGBTQ equality within the department.”

Dromm said he hopes that Heritage of Pride “will work to bring us all together so everyone can celebrate Pride.”

The long, hard road to ensure that the Irish LGBT community was represented with a banner in the New York City St. Patrick’s Day parade makes the decision by NYC Pride officials to ban gay law enforcement officers from marching with their banner especially perplexing, Fay says.

“If I have learned anything from a life around parades it is that exclusion only leaves a trail of hurt and division between included and excluded, insiders and outsiders. Such an approach diminishes our celebrations,” he feels.

“Through the years, members of GOAL have been advocates for our LGBTQ communities and for minority communities. The exclusion of our LGBTQ brothers and sisters in GOAL is hardly a path to healing past hurts, racial injustice, and police brutality. All it does is divide and drives a wedge between us.”

“GOAL and our members have had our hands in every police reform and policy revision touching on the LGBTQIA+ community in New York City,” a statement from the group said.

It added, “Heritage of Pride is well aware that the city would not allow a large scale event to occur without police presence. So their response to activist pressure is to take the low road by preventing their fellow community members from celebrating their identities and honoring the shared legacy of the Stonewall Riots.

"It is demoralizing that Heritage of Pride didn’t have the courage to refer to GOAL by name in its announcement, referring to us only as ‘Law Enforcement Exhibitors.’ The label is not only offensive but dehumanizing for our members.”

“Look, I fully appreciate the extraordinary history of Pride in this city and I honor what Pride has achieved over the years. I think that decision’s a mistake,” de Blasio said on Monday.

“I believe in inclusion. And we’re talking about one of the issues is officers who are members of the LGBT community, wanting to march and express their pride and their solidarity with the community and their desire to keep changing the NYPD and changing the city.”

NYC Pride is the largest celebration of the LGBT community in the country. More than 50 events, many of them virtual, are scheduled for this year’s Pride week which starts on June 21 and concludes on the 27th with a greatly scaled back parade due to the pandemic, details of which have yet to be announced.

The Irish government established a formal presence in the Pride march for the first time in 2018, 25 years after the decriminalization of homosexuality in Ireland. More than 400 participants marched behind the banners of the Irish Consulate and Fay’s Lavender and Green Alliance.

Fay is hoping that NYC Pride officials will reconsider the ban against law enforcement.

“The LGBT movement from the beginning inspired all of us to rise up, work for change and challenge injustice. That work continues.

"But as we continue to address policing and unjust targeting of people and systemic racism we cannot scapegoat our LGBT brothers and sisters in GOAL,” Fay told the Irish Voice.

“There is room for reconsideration until the parade whistle blows. I hope that the exclusion of GOAL will not end the conversation but move the dialogue urgently forward toward a transformation, reconsideration, and resolution.

"My hope and prayer is that we will find our way through renewed conversations so LGBTQ+ New Yorkers can be on the avenue together making our way through shared struggle, shared solution, and shared hopes.”