In a landmark ruling, the US Supreme Court found that the 1964 Civil Rights Act, which forbids discrimination based on sex, also applies to sexual orientation. 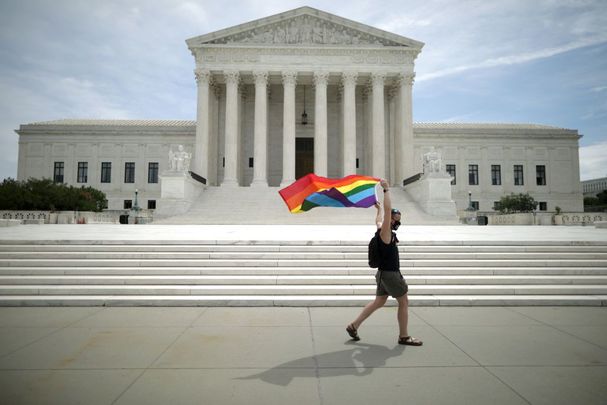 Happy Pride! The US Supreme Court has ruled against discrimination of LGBT persons. Getty Images

In a six-to-three ruling, the US Supreme Court extended workplace protections to LGBT employees in the 26 states of the union where until yesterday it was still legal to fire them over their sexual orientation.

The victory was a surprise and a long time coming. The gender identity part of the case was brought by the transgender woman, Aimee Stephens, who was fired from a Michigan funeral home in 2013 after she announced she was transgender and would start presenting as a woman.

Sadly Stephens died on May 12, just a month before the successful ruling.

Justice Gorsuch, who wrote the majority opinion, laid it out in plain English: “An employer who fires an individual merely for being gay or transgender defies the law.”

To wit, any employer who fires an individual for being LGBT fires that person for traits or actions that they would not have questioned in members of a different sex. So sex plays a necessary and undisguised role, which is exactly what Title VII forbids. It's pure textualism, which is Gorsuch's passion.

If you have never had a restless night wondering whether the Supreme Court is going to wreck or improve the quality of your life the next morning, then you're probably not a member of a vulnerable minority group in this country.

But if you have and you are, then you'll know all too wearily that yesterdays six-to-three ruling about whether LGBT employees are protected by the Civil Rights Act (newsflash, they are) was a rare victory in the otherwise relentless assault on LGBT dignity and rights since President Donald Trump took up office in the White House.

So before we get too carried away or beguiled by victory blindness, we would do well to remember that this is still a very conservative court, that Justice Kavanaugh has revealed his antipathy to LGBT equality, and that the stage is already being set for another bruising fight over how far religious exemptions apply to certain federal laws, which could significantly impact yesterdays decision.

“When an employer fires an employee for being homosexual or transgender, it necessarily and intentionally discriminates against that individual in part because of sex. And that is all Title VII has ever demanded to establish liability.”
—Justice Neil Gorsuch

Still ahead the rightward leaning court will decide if individuals, businesses, and organizations have the right to cite their religious beliefs when it comes to the enforcement of LGBT anti-discrimination laws.

The question of whether there is a constitutional right to discriminate against LGBT people based on religious beliefs has not yet been settled, in other words. Issues like transgender bathroom bills will be decided in 2021. Time to put the champagne back on ice, so.

To date, the court has talked out of both sides of its mouth on the conflict between LGBT and religious rights, with neither side getting all of what it wishes for. When it comes to LGBT rights the arc of the universe is long and it still keeps on bending toward stalemate.