WATCH: A powerful meeting between gay people and Catholics in Dundalk 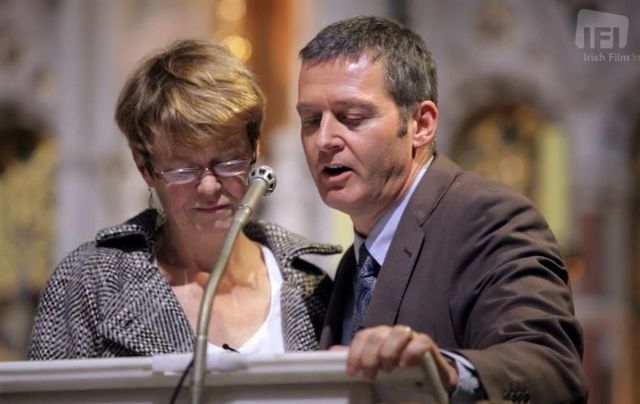 Kay Ferreter and Stephen Vaughan address the congregation about their experiences of being gay and lesbian in Ireland and feeling excluded by Catholic doctrine. Irish Film Institute

The short Irish film Novena is now available to stream for free on the Irish Film Institute's IFIPlayer.

Directed by award-winning filmmaker Anna Rodgers, who has made numerous LGBT films that have been distributed internationally, Novena captures an unusual event in Catholic Ireland.

The Solemn Novena is an annual 9-day festival of faith at St. Joseph’s Redemptorists Church in Dundalk, Co Louth. Each year, the festival is attended by thousands, coming from the local area and the surrounding towns and counties.

In the 2012 St. Gerard Majella Novena, the festival director, Father Michael Cusack, invited Stephen Vaughan and Kay Ferreter to address the congregation about their experiences of being gay and lesbian in Ireland and feeling excluded by Catholic doctrine.

This short film documents this event, capturing their powerful speech and one priest’s aspiration of a more inclusive church.

Novena was completed through crowd-funding on the website Fund:It. It won Best Documentary at the Kerry Film Festival 2013, Best Film & Television at GALAS 2014, and was joint winner of Spirit Of The Festival at GAZE LGBT Film Festival 2013.

With kind permission of Anna Rodgers, “Novena" is published here with thanks to the Irish Film Institute (IFI), who IrishCentral have partnered up with throughout 2021 to bring you a taste of what their remarkable collection entails. You can find all IrishCentral articles and videos from the IFI here.