In "His Mother" from the Irish Film Institute, an Irish man is reunited with his mother after emigrating to New York City from rural Ireland. 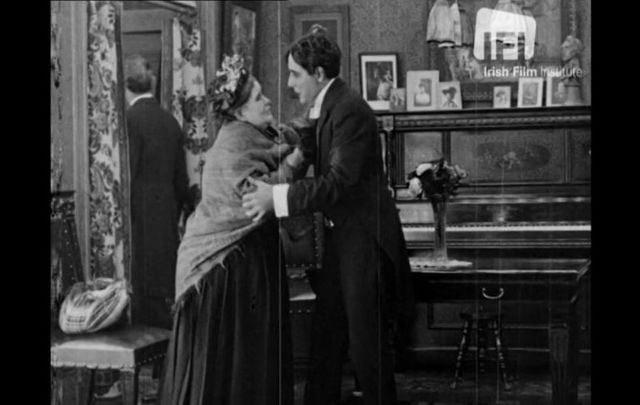 The 1912 Irish short film "His Mother" is now available on the Irish Film Institute's IFIPlayer.

Directed by Sidney Alcott and produced by The Kalem Film Company of America, "His Mother" opens with a wealthy American tourist couple happening upon a talented violinist, Terence, and his mother in a small cottage in rural Ireland.

Terence grasps the opportunity and, thanks to his mother’s meager savings, leaves his peasant roots in Ireland for the bright lights of the New York stage. He thrives in New York society but, back in Ireland, his pining mother is encouraged by the local priest to join him. She finally arrives at a concert Terence is playing in Carnegie Hall.

Like the earlier The Lad From Old Ireland, this film was also shot on two continents in rural and urban locations and aboard a transatlantic liner in between, adding visual variety and authenticity to the tale.

"His Mother" is part of the Irish Film Institute's O'Kalem Collection.

About The O’Kalem Collection at The Irish Film Institute

The O’Kalem Collection includes films directed by Sidney Olcott for: The Kalem Company (The Lad From Old Ireland, Rory O’More, The Colleen Bawn, His Mother and You Remember Ellen), for the Gene Gauntier Feature Players (For Ireland’s Sake, Come Back to Erin), and the Lubin Company (Bold Emmet Ireland’s Martyr).

When New York’s Kalem Film Company came to Ireland in 1910 to make the short film The Lad from Old Ireland they made cinema history – the film was the first made by an American production company outside the US and also the first film ever made on two continents (and the Atlantic Ocean in between). Actor/director Sidney Olcott and actor/writer Gene Gauntier returned to Ireland several times between 1910 and 1915 to produce almost thirty Irish-themed films and earned themselves the nickname the O’Kalems in the process. The majority of their films were made in and around Killarney, Co. Kerry, making extensive use of the dramatic landscape and employing locals as extras.

The O’Kalem films can be considered important not only for their claim to be the first fiction films made in Ireland and on two continents but also because they tell us much about the Irish emigrant experience in America at the start of the 20th century. They are also fine examples of silent era filmmaking by a large American studio. For several decades the IFI Irish Film Archive worked to identify extant copies of the O’Kalem films held in international film archives, to centralize them and retrieve copies of them for the benefit of Irish audiences.

To view more from the O'Kalem Collection via the Irish Film Institute, click here.

“His Mother" is published here with thanks to the Irish Film Institute (IFI), who IrishCentral have partnered up with throughout 2021 to bring you a taste of what their remarkable collection entails. You can find all IrishCentral articles and videos from the IFI here.