In "The Lad from Old Ireland," which debuted in 1910, poor Irish farmer Terry ventures to the US - but will he stay? 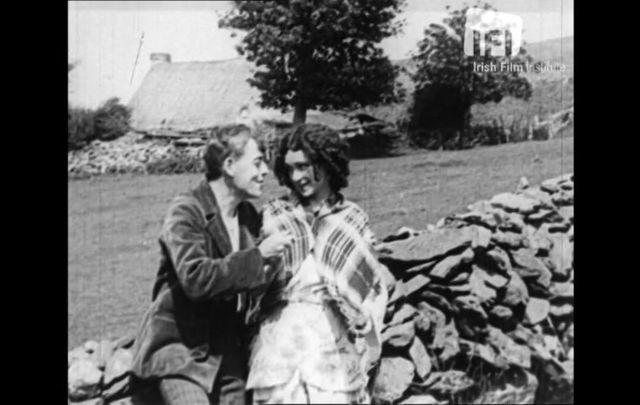 "The Lad from the Old Ireland" first debuted in 1910. Irish Film Institute

“The Lad from Old Ireland" is now available to watch for free from the Irish Film Institute’s IFIPlayer.

In the 12-minute silent film "The Lad from Old Ireland," poor Irish farmer Terry (played by Sidney Olcott) has grown tired of working the land and dreams of a better life.  He decides to head west to build a better, more prosperous future in the USA.

He bids farewell to his darling Aileen (played by Gene Gauntier) but promises he will return to her someday when he has made his fortune.

In New York, he finds work on a building site and quickly establishes himself in New York society until he eventually enters politics and becomes the mayor of the city’s Tammany Hall.

Meanwhile, Aileen pines for him and, with little money left to her name, is soon to face eviction. Terry is faced with a decision – to forfeit all he has achieved in America to return home and help his beloved in her hour of need.

While the tale of Terry the poor Irish farmer may be timeless, "The Lad from Old Ireland" made history in 1910 as it was the first film made by an American production company (Kalem Film Company) outside the US, and also the first film ever made on two continents (and the Atlantic Ocean in between).

About The O’Kalem Collection at The Irish Film Institute

"The Lad from Old Ireland" is part of The O’Kalem Collection, which includes films directed by Sidney Olcott for The Kalem Company (The Lad From Old Ireland, Rory O’More, The Colleen Bawn, His Mother and You Remember Ellen), for the Gene Gauntier Feature Players (For Ireland’s Sake, Come Back to Erin), and the Lubin Company (Bold Emmet Ireland’s Martyr).

Actor/director Sidney Olcott and actor/writer Gene Gauntier returned to Ireland several times between 1910 and 1915 to produce almost thirty Irish-themed films and earned themselves the nickname the O’Kalems in the process. The majority of their films were made in and around Killarney, Co. Kerry, making extensive use of the dramatic landscape and employing locals as extras.

The O’Kalem films can be considered important not only for their claim to be the first fiction films made in Ireland and on two continents, but also because they tell us much about the Irish emigrant experience in America at the start of the 20th century. They are also fine examples of silent-era filmmaking by a large American studio. For several decades the IFI Irish Film Archive worked to identify extant copies of the O’Kalem films held in international film archives, to centralize them and retrieve copies of them for the benefit of Irish audiences.