In "Irish Co-Operative Gathers Peat," the Irish Film Institute provides a look at life in Ireland a century ago. 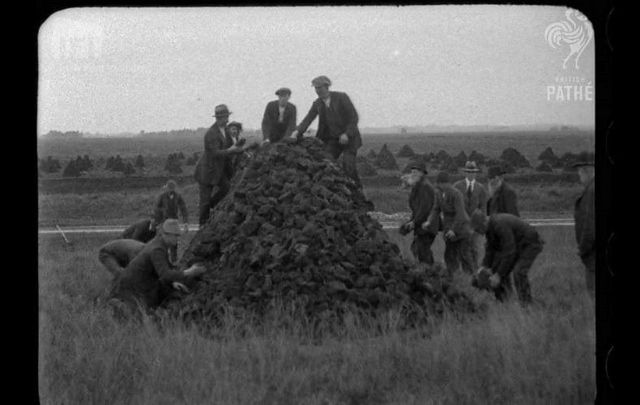 Scenes of an Irish community gathering peat a century ago. Irish Film Institute

This historical footage is but one of many films available to watch for free on the Irish Film Institute's IFIPlayer.

In the nearly 12-minute newsreel "Irish Co-Operative Gathers Peat," captured by British Pathe in the 1920s and preserved by the Irish Film Institute, an Irish community comes together to dig, stack, and gather turf.

It is an activity involving the whole community, notes the IFI. Even the local priest is involved in overseeing the sacks of turf loaded onto a barge before being transported by canal.

‘Rathangan’ is inscribed on the side of the barge and a man waves an ‘Up Kildare’ flag in the shot. The turf is possibly extracted from the Bog of Allen – a large, raised bogland stretching over 5 counties in Ireland.

In the 19th and early 20th century, non-agriculturally viable bogland was Ireland’s primary indigenous fuel resource. It is estimated that 6 million tonnes of sod turf was produced in 1921.

In Ireland today, a focus has shifted to a more environment-friendly energy production and there has been an attempt to restore Irish boglands.

This film is part of the Irish Film Institute’s “Irish Independence Film Collection - The Early Irish Free State,” which explores facets of Irish society after the War of Independence and during the birth of the Irish Republic.

Of the collection, the IFI says: “Film production in Ireland was of low political and economic priority during this period and the newsreels, documentaries, and cinémagazines in this collection were filmed by the non-indigenous agency, British Pathé.

“Although this representation of Ireland through a foreign lens offers us a very specific view of the fledgling nation, it also documents aspects of Irish life that may otherwise not have been recorded.

“We see parts of the country struggling with potato blight, traditional craft-making, and the isolated way of life of the western islanders, in stark contrast to modern developments such as the development of hydro-power, manufacturing fairs, the promotion of brand Ireland and finally the beginning of the Irish Border, a concern which would return in this century.

“These Irish newsreel stories were not held in an Irish archive until very recently and many had not been made available to the public since their distribution nearly 100 years ago. With the support of the Department of Culture, Heritage and the Gaeltacht, the Irish Film Institute was able to work with the original custodians of these collections (the British Film Institute and British Pathé) in order to repatriate, safeguard and share these vital visual records.

“By digitising the fragile, original nitrate film prints to high definition format, historians, academics and the public can now witness details not evident in the standard definition versions of the material, previously available.”