Father Mychal Judge, the proud son of two Irish immigrants, was one of the first people to rush to the World Trade Center on September 11, 2001. 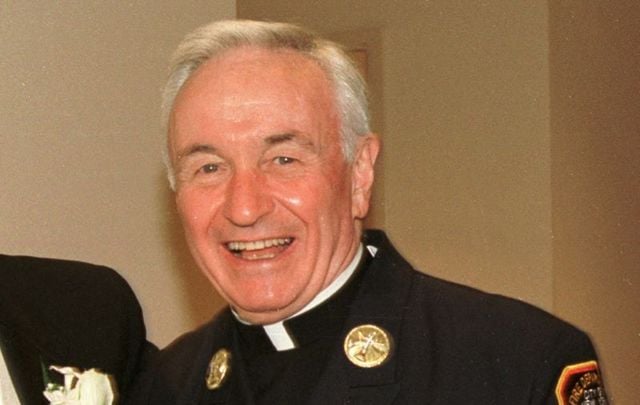 On September 11, 2001, after the planes hit the World Trade Center, Father Mychal Judge ran into the North Tower alongside the firemen he served. Soon after he was recorded as the first victim of the terrorist attacks.

Extremely proud of his Irish heritage, Robert Emmett Judge was born in Brooklyn on May 11, 1933, to two Irish emigrants from Co Leitrim. At the age of 16, he answered his calling to the Franciscan vocation aged and entered St. Joseph’s Seraphic Seminary in Callicoon, New York where he was received into the Franciscan Order on August 12, 1954.

In 1957, he graduated from St. Bonaventure University, the Franciscan school near Olean, New York. He was ordained into the priesthood on February 25, 1961.

After taking a vow of poverty, Judge became committed to helping impoverished New Yorkers and those in minority groups such as gays, homeless, immigrants, and AIDS sufferers.

A fellow friar at St. Francis of Assisi, Father Patrick Fitzgerald, first met judge during their formative years in the Franciscan order. Their friendship began on September 11, 1951, exactly 50 years to the day that Judge lost his life in the terror attacks.

“He was very good to a lot of people,” Fitzgerald recalls. “He was selfless.

“When people would give him gifts at Christmas time, he would write them the nicest letter and then bring them down to AIDS patients in the Bailey House on Christopher Street. They wound up with the nicest sweater, scarves, and even Irish caps,” he told the Irish Voice.

“I know that he was very proud to be Irish. He knew the details of his mother and father’s emigration and had traveled to Ireland many times.”

A recovered alcoholic, Judge celebrated his 23rd year of sobriety in 2001. No stranger to addiction, he instilled courage in the many lives he touched.

“A lot of young men whom he helped get into sobriety will tell you he was ‘Father Mike.’ He really mirrored for a lot of men the great image of a father,” says Brian Carroll, a former Franciscan friar and colleague of Judge.

David Fullam, a retired lieutenant in the FDNY and formerly stationed at Ladder 24 were Judge was chaplain, has fond memories of the Irish American.

“He married me and my wife Linda. He baptized my daughter Shannon and blessed my wife when she was pregnant with our second child,” Fullam told the Irish Voice.

“He was truly something special. He had certain charisma and charm.” He remembers Judge’s wit and how he liked to crack a joke.

“Even when I asked him to marry us a year in advance he said, ‘I cannot do it, I have funeral that day.’ I was really disappointed before he stopped me and said, ‘Dave it’s a year away, I don’t know what I will be doing, of course I will marry you.’

“I was overjoyed,” the firefighter recalls.

After receiving minor burns on the job, Fullam was admitted to the hospital late one night and was surprised when Judge appeared up in the early hours of the morning.

“I was just amazed that he showed up. You don’t expect people to visit after midnight. He sat and spent some time with me, making sure that I was okay.

“He apologized to me for not bringing wool socks. Whenever you visit a firefighter they always had wet feet as their boots are soaked," Fullam explained.

When the news came that Judge had lost his life in the terrorist attacks, Fullam raced to the firehouse on 31st Street where Judge’s body was laid out in a makeshift shrine.

“When we got the news that afternoon we weren't that far away. They had him laid out in the firehouse,” Fullam recalls.

“He is the only one that had an open casket funeral. I was happy I was able to kiss his hands. I think he knew that God had taken him for a reason. He was there for everybody else.”