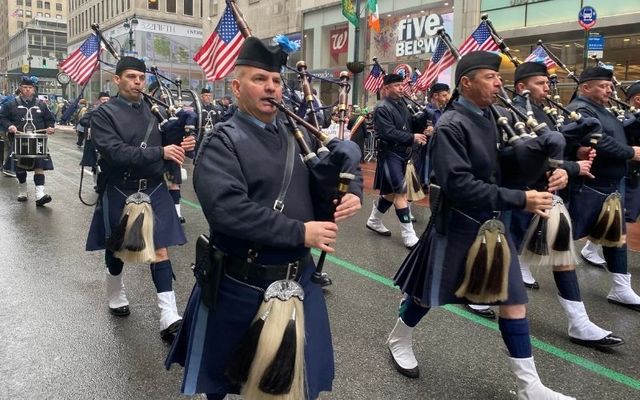 It was 2019 when the New York City St. Patrick’s Day Parade last made buoyant Irish noise on Fifth Avenue, yet the most poignant part of the 261st annual march last Thursday came in the minutes of silence and reflection at noon when the parade stood still in tribute to the pandemic’s frontline workers and those who passed of Covid, and last year’s 20th anniversary of 9/11.

Bishop Edmund Whalen led the parade in prayer after the names of the five FDNY and NYPD members who lost their lives in the line of duty in the past year were announced, each with a bell, and marchers turned to look south on Fifth Avenue towards the World Trade Center.

“As we did 20 years ago, we pause our march to remember those who lost their lives on September 11, 2001, victims of an act of senseless violence, and to remember those who risked and lost their lives trying to save them,” Whalen said at St. Patrick’s Cathedral to a hushed crowd of thousands who lined Fifth Avenue and the adjacent streets despite the cloudy skies which poured heavy rain after 1:30 in the afternoon when the parade was more than half over.

The bishop, filling in for Cardinal Timothy Dolan who was in St. Louis for his mother’s funeral, paid tribute to first responders battling the pandemic and to the people of Ukraine before renditions of “Taps” and “Amazing Grace” were played, and the parade resumed its normal route up Fifth Avenue towards 79th Street.

The line of march included Irish groups, marching bands, twirlers, dancers, and, of course, politicians eager to be in the public eye again. Mayor Eric Adams, who hosted a holiday breakfast for members of the Irish community at Gracie Mansion at 7 am with plant-based food – chicken meatballs in place of sausages, mini scones, fruit, glasses of oatmeal, and Irish whiskey – heralded the parade as an important part of the city’s comeback from the pandemic.

"Covid is not terrorism, but it brought terror. And now we're at the 9/12 moment when we march down in the St. Patrick's Day parade. We're getting up and we're saying New York is stronger, better and we're ready to get back to our city being open,” Adams said while doing a radio broadcast at Connolly’s pub prior to the march.

Top o'the morning, New York City! For the first time in two years, our streets will once again be filled with the joy and celebration of our Irish community.

That spirit of strength and resiliency is felt in every corner of our city. Happy #StPatricksDay! pic.twitter.com/CEZkHYqZrZ

New York Governor Kathy Hochul marched alongside State Attorney General Letitia James and Irish Environment Minister Eamon Ryan, while members of the City Council also headed up the avenue under their own banner.

The @StPatsParadeNYC is an iconic New York tradition and it feels good to see a sea of green back on Fifth Avenue after two years away. Not even the rain could dampen the Irish spirit today. Sláinte! pic.twitter.com/fXZZEuO0rk

The Fighting 69th, as is tradition, kicked off the march, and James Callahan, general president of the International Union of Operating Engineers, led the way as grand marshal after a three-year pandemic induced wait, with dozens of family members and friends following behind. 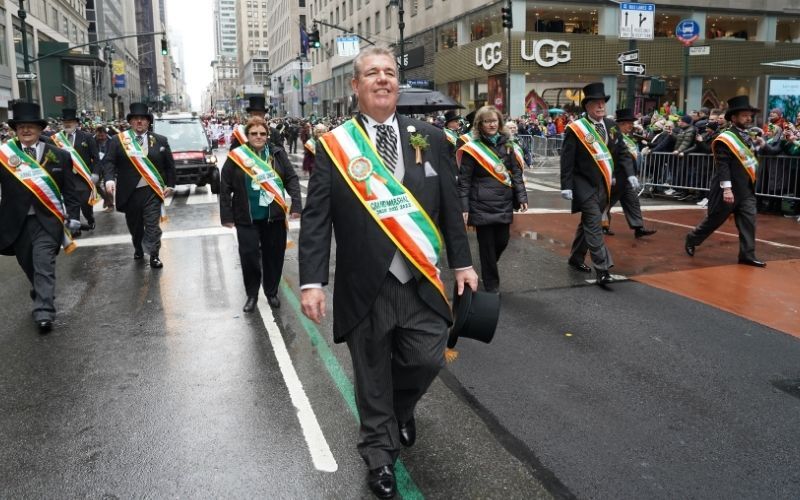 To have one of the world’s famed public celebrations back in its rightful home in the heart of Manhattan meant everything to Patrick Doherty from Queens, who spoke to the Irish Voice, sister publication to IrishCentral, while standing on Fifth Avenue not far from St. Patrick’s Cathedral, holding a homemade poster with a simple message for the marchers: “Welcome Back.”

“I never miss this parade. It’s been so disappointing the past couple of years,” he said. “I’m glad we are here again. Today takes away, at least a little bit, everything negative going on in the world. We need a day to be positive.” 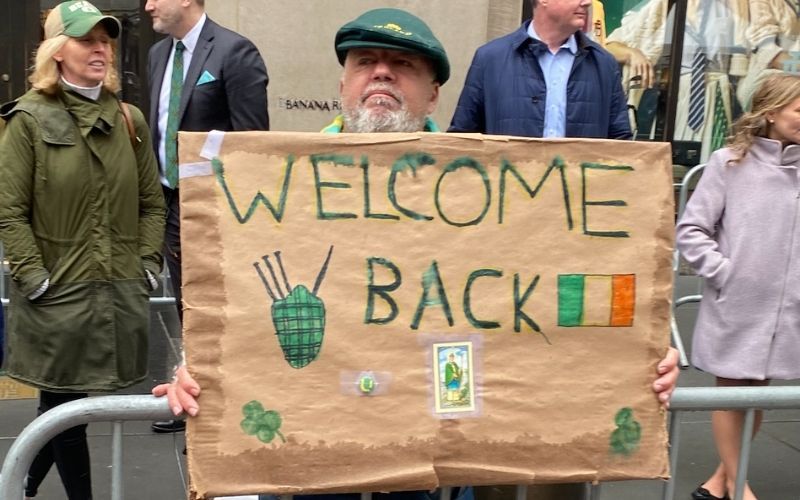 Robert and Trina Bucaro of Wallington, New Jersey, and their family make a point of attending the parade every year, even though they aren’t Irish. Daughter Raleigh celebrated her 12th birthday on the 17th, and her parents proudly noted to the Irish Voice that she was born while the parade telecast was on the background TV.

“It feels back to normal today,” Robert, who works for NBCUniversal, said. “We came to the city the past couple of years when the parade wasn’t on just to be here. But it was really sad.”

Raleigh and her sister Phoebe get to play hooky from school every March 17, they said with a smile. “When Raleigh was a baby, we had her here with a sign over her head that said she was one year old,” Trina said.

The Bucaros have no interest in attending other St. Pat’s parades, many of which take place in New Jersey. “This is the big one. This is the one to be at. This is our thing,” said Robert. 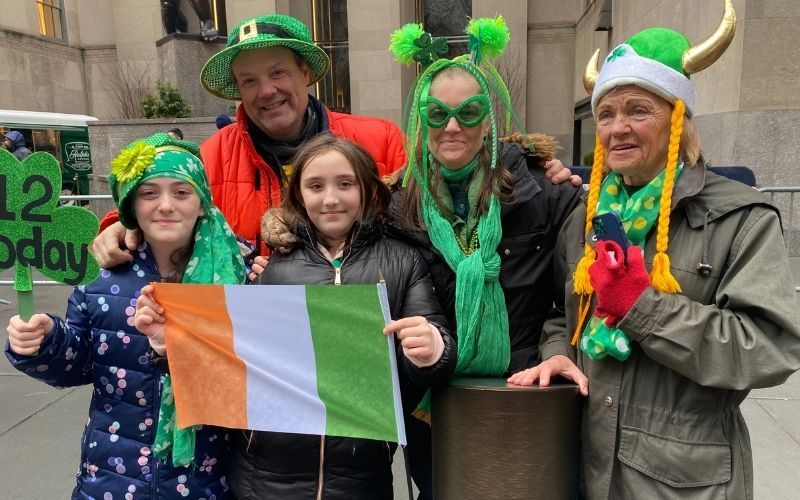 There were some sideline demonstrators scattered throughout the march, including the Irish Pro-Life USA group and its supporters, climate change activists urging Hochul to go “gas-free by 2024,” and a group of Donald Trump fans stationed across the street from Trump Tower holding Gays for Trump and Let’s Go Brandon signs.

“What’s Biden done for the Irish? Nothing! Our country has gone to hell since he’s been in office,” one MAGA supporter wearing buttons and fangs on his teeth told the Irish Voice. 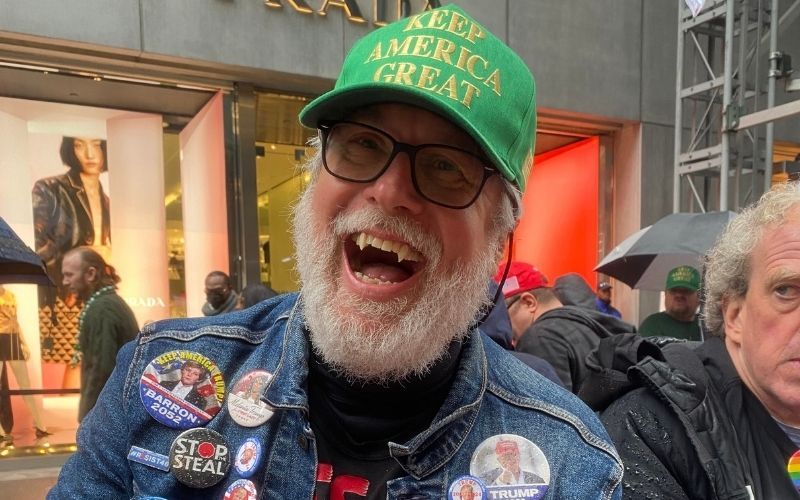 The greening of Fifth Avenue also included some blue and yellow in honor of Ukraine and its people, courtesy of Northwell Health marchers who held the flags of their native country behind Northwell’s banner.

“It is wonderful and very meaningful to have such a great show of support from the Irish on Fifth Avenue. Solidarity is so important,” said Dr. Evelina Grayver, a first responder cardiologist and Ukraine native. 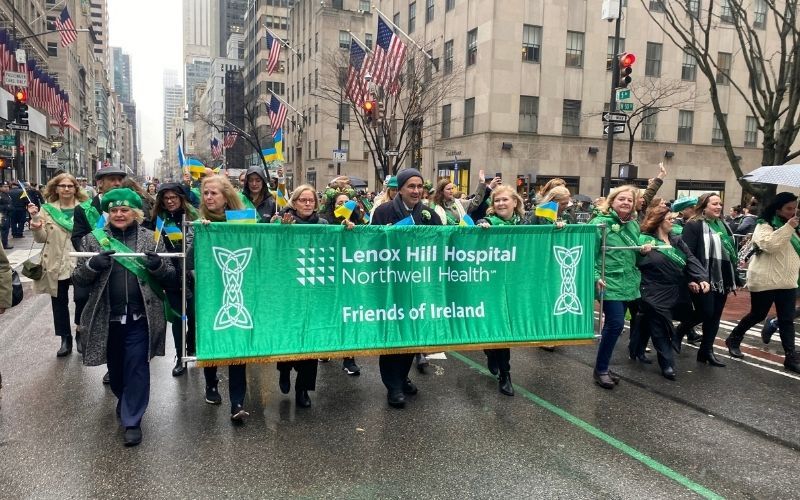