Bono's much-maligned St. Patrick's Day poem caused eyes to roll and eyebrows to raise in all quarters of Irish Twitter. 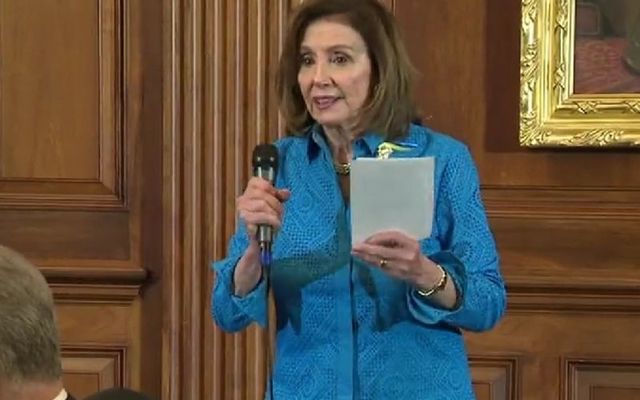 March 17, 2022: US Speaker of the House Nancy Pelosi during the Friends of Ireland luncheon on St. Patrick's Day. CSPAN Twitter

US Speaker of the House Nancy Pelosi went viral on St. Patrick's Day after reading a poem written by U2 frontman Bono which declared Ukrainian President Volodymyr Zelenskyy to be a modern-day St. Patrick.

Pelosi read the much-maligned poem during the Friends of Ireland luncheon at the Capitol on Thursday afternoon, St. Patrick's Day, after Bono had shared it with her earlier in the day.

Oh Saint Patrick he drove out the snakes

With his prayers but that's not all it takes.

For the snake symbolizes

An evil that rises

And hides in your heart

And the evil has risen my friends

From the darkness that lives in some men.

But in sorrow and fear

That's when saints can appear

To drive out those old snakes once again.

And they struggle for us to be free

From the psycho in this human family.

Is now the Ukraine

She then introduces Riverdance. pic.twitter.com/NzPY1VP2bN

Bono's poem caused eyes to roll and eyebrows to raise in all quarters of Irish Twitter.

"After that Bono thing, I think we need to bring in licenses for poem-writing. The whole thing is unregulated. Too many cowboys in the market," Irish comedian Colm O'Reagan tweeted.

"It was bad enough that the novel is dead, now Bono has gone and murdered poetry," another Twitter account said.

Meanwhile, Irish comedian Michael Fry joked that Bono had been given a 10-minute deadline to write the poem.

“Hi Bono it’s the White House here, we’ve been trying to reach you all day, I’m just in touch about the poem you said you’d write for Speaker Pelosi?”

Several Twitter users also called for sanctions to be introduced against the U2 frontman for writing the poem.

Irish comedian David O'Doherty joked that we might have "Songs of Innocence" incident on our hands:

Worse news. Bono’s poem will be the default text message on all new iPhones

But perhaps Bono's poem was a good thing?

🚨🚨🚨 BREAKING Reports that Russian troops are surrendering en masse after being read a translation of Bono's poem.

Writing on the official U2 Twitter account, Bono said he traditionally sends a limerick to Pelosi ahead of the St. Patrick's Day luncheon.

"This year the limerick is irregular and not funny at all. We stand with the people of Ukraine and their leader. It wasn’t written to be published," Bono wrote on Twitter.

‘I’ve a tradition of sending a limerick to @SpeakerPelosi’s St. Patrick’s Day lunch over the years. This year the limerick is irregular & not funny at all. We stand with the people of Ukraine & their leader. It wasn’t written to be published, but since it’s out, here it is.’-Bono pic.twitter.com/pLkE59DSxU