New York City Mayor Eric Adams got a rousing reception in the Rockaways on March 5 when he attended his first St. Patrick’s Day parade as the city’s chief executive. 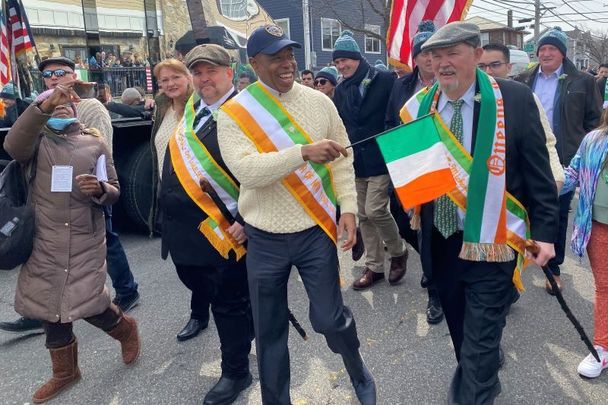 It initially looked as if New York City Mayor Eric Adams might have a tough time winning over the throngs of locals on the sidelines at the 47th annual Queens County St. Patrick’s Day parade in the Rockaways on March 5, with "Let’s Go Brandon" flags flying from some houses along the route and a good few onlookers decked out in Happy July 4th green t-shirts with President Joe Biden’s face surrounded by shamrocks.

But from the moment the march started at its usual point at Newport Avenue and Beach 130th Street, Adams was greeted with a big Irish bearhug from the crowds who cheered and clapped for the newly elected Democrat, who showed up on time – a marked departure from his predecessor Bill de Blasio – and dived right in to connect with his constituents. He posed for dozens of selfies with adults, kids, and pets, downed a shot of Irish whiskey outside a house party, purchased his favored beaded bracelets for $10 from little girls who were selling their homemade goods, and even asked festive looking onlookers if they wouldn’t mind taking pictures with him.

The Luck o’the Rockaways was on display in Queens today! #StPatricksDay pic.twitter.com/dzgESN8XBI

There were the occasional hecklers – it’s a New York parade, after all – who lashed out over mask-wearing and New York City workers who lost their jobs because of vaccine mandates. Adams didn’t pretend they were invisible, offering smiles and “nice to see you” words of outreach.

At one point, a woman standing on a balcony of a house on Newport Avenue shouted down at the mayor about children younger than five having to wear masks at school. Adams made one of his frequent detours on the day and walked to the lawn of the home, gesturing for her to come down to talk. She did and they had a respectful exchange, with Adams explaining the rationale behind his policy.

“My largest number of children who are hospitalized are less than five, so I don’t want to be reckless. But we got this. We are going to get this done. And thank you. I want to see you smile,” the mayor said.

The woman, Marissa Larson, with tears in her eyes, told the Irish Voice, sister publication to IrishCentral, that sending her child to school in a mask was, at this juncture, unacceptable.  Was she satisfied with her brief meeting with Adams?

“Yes, I am. I think he’s going to work hard. I believe him,” Larson replied.

That’s how it pretty much went in the Republican-leaning Rockaways for Adams, who wore a beige Aran sweater, a parade sash, and an NYPD cap while carrying an Irish Tricolor for the duration of his march, which ended mid-parade at Beach 116th Street. During an interview with the Irish Voice along the route, Adams was asked about last Sunday’s St. Patrick’s parade in Staten Island which continues to ban LGBT groups from taking part.

“I know they got a little controversy going on. But we’ve gotta be inclusive,” said Adams, who didn’t march in Staten Island.

The mayor also spoke of his affection for Ireland and his hope to return in the future.

“I did go in 2015 and I’m going to go again. I loved my trip. I love Ireland!” said Adams, who was feeling the love along Newport Avenue from a crowd which doesn’t automatically genuflect before elected officials and loudly jeered “cop killing commie” de Blasio and his predecessor Michael Bloomberg.

Adams kicked off the parade by saying that the Rockaways “are the rock of our city. When you look at the number of men and women who are part of our civil service, and the number of police officers, firefighters, schoolteachers, transit employees, union members…you are New York’s rock and I could not think of any other place than to be here and to march with you.

“When I was in Ireland several years ago, they looked at me and said, ‘Eric, you have an Irish last name, Adams, so we have respect for you no matter what…we know what liquid sunshine is because the rainy days are just as good and that’s why we’ve got those several shades of green! We know that good times are coming! Our city is back bigger, stronger, and better than ever.”

The mayor swigged a shot of Jameson in a plastic cup outside a house party, asked youngsters if he could share their green bagels, petted dogs, and basked in the glory of being a politician in his honeymoon period. One woman shouted about New York City workers who lost jobs due to the vaccine mandate, and a man on the other side of the street told her to pipe down.

“Leave him alone. It’s a parade!” he roared.

Before the march got underway, a woman wearing a Giuliani 2022 cap wondered if anyone had seen the object of her hat, Andrew Giuliani, son of Rudy, who is running for the GOP nomination to face off against New York Democratic Governor Kathy Hochul.

Donna Richards was armed with a clipboard, trying to rustle up signatures for Andrew so he can get on the ballot. She said she had positive feedback from parade-goers and was told Rudy and Andrew would be in attendance. Sure enough, they were, but this reporter, who spent three hours at the parade, didn’t catch sight of them.

But the New York Post did, of course, and posted some photos of father and son, both with green ties, enjoying some love from the Rockaways.

“There’s the Right Way, the Wrong Way, and then…there’s the ROCKAWAY!” 36-year-old Andrew posted on his Twitter.

Mike Benn, the long-time chairman of the parade, couldn’t have been happier with how the day turned out – a splash of sun, no wind chill from the nearby Atlantic, a happy mayor, and even more joyous locals who couldn’t wait to don the green again.

“Our new mayor said get down to rock and march on at our dinner last month,” Benn told the Irish Voice, “and that’s exactly what we did. We’re always ready to do that here in the Rockaways.”