The New York City St. Patrick's Day Parade will be broadcast live on NBC 4 New York this March 17 for the first time since 2019. 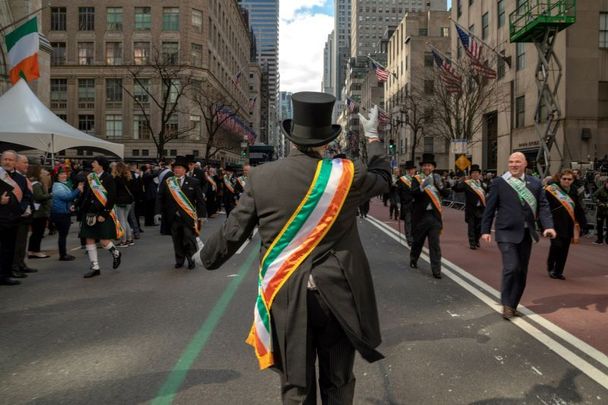 Live, exclusive coverage of New York City’s 261st St. Patrick’s Day Parade will be on NBC 4 New York / WNBC on Thursday, March 17 from 11 am through 3 pm.

The parade will air on WNBC and will also be streamed live on NBCNewYork.com.

This is the first time the historic parade is being televised live on NBC since 2019. In 2020, as the pandemic took hold globally, the parade was canceled just days before step-off. However, a small contingent still marched up Fifth Ave that year, determined to keep the longstanding tradition alive. In 2021, with NYC still under public health restrictions, only a small number of people marched in the scaled-back parade.

Commenting on the return of the live broadcast, Eric Lerner, President and General Manager of NBC 4 New York, said: “This is a big moment in our city’s road to recovery.

"We are thrilled to be the exclusive broadcast and digital home for this iconic New York institution, and cannot wait to bring WNBC’s viewers on an unforgettable journey up Fifth Avenue - filled with sounds and sights that have captivated New Yorkers for more than two centuries."

NBC 4 New York’s broadcast coverage will be led by Weekend Today in New York anchor Gus Rosendale and News 4 New York reporter Rana Novini. Rosendale will be joined in the broadcast booth by Ireland Calls Radio Show personalities Tommy Smyth and Treasa Goodwin-Smyth, providing viewers with a fun and informative look at Parade’s rich history. Novini will take viewers on a memorable journey up the Fifth Avenue parade route, featuring the traditional stop at St. Patrick’s Cathedral and interviewing Parade participants and spectators every step of the way.

James T. Callahan has been named as the Grand Marshal of the 2022 New York City St. Patrick's Day Parade. In addition to being president of the International Union of Operating Engineers (IUOE), Callahan is president of New York Friends of Ireland. His grandfather and grandmother, John Joseph and Alice Callahan, came from Co Limerick. His grandfather, Michael Francis Lyon, came from Co Kerry in the early 1900s where he settled in New York City and became an Operating Engineer. Callahan and his wife, Fran, are the proud parents to James, Ian, and Patrick and reside on Long Island.