Despite being officially postponed in light of coronavirus, a small contingent of the NYC St. Patrick's Day Parade marched up Fifth Avenue in the early hours of March 17, 2020. 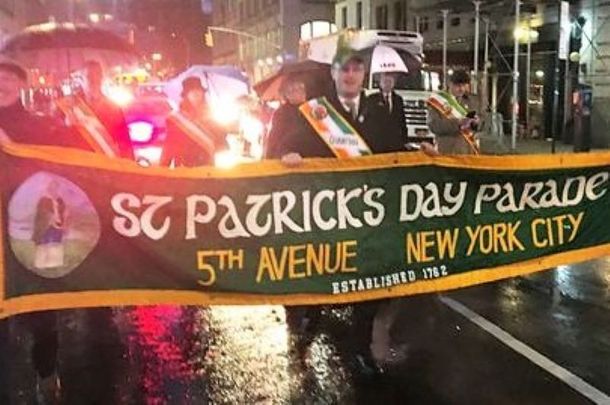 A small contingent of the NYC St. Patrick's Day Parade, though officially postponed in light of coronavirus, marched up Fifth Avenue in the early hours of March 17.

There were 234 marching units set to take their place on Fifth Avenue in the 2020 St. Patrick’s Day parade, but coronavirus chopped that number down to two – the Fighting 69th Regiment, who proudly start the march every year, and members of the parade committee who were determined to keep the 258-year cherished tradition alive in some form even though the parade had been officially postponed.

And so they did on a damp, rainy St. Patrick’s morning, when the 259th annual New York City mini-parade got underway at roughly 6:48 a.m. when 30 members of the Fighting 69th led about 20 parade officials and volunteers on a route that started at the Regiment Armory on Lexington Avenue and 26th Street and wound its way up Madison Avenue.  A lone bagpiper, the Regiment’s Jim Brady, played his pipes intermittently, and social distancing, the new norm, was practiced.  Kiss Me I’m Irish was definitely not foremost on anyone’s mind.

With a police escort halting what little traffic was on the streets, the marchers continued to the parade’s spiritual home, St. Patrick’s Cathedral on 51st Street for a prayer as the annual March 17 Mass said by Cardinal Dolan was canceled.  The NYPD escort then departed as did much of the Fighting 69th.  Several of the marchers continued on the sidewalk of Fifth Avenue up to the American Irish Historical Society on 80th Street, which the parade would have passed by this year had it gone ahead as planned – the first time in several years that organizers had secured NYPD permission to once again continue the march past the Society.

“We understood totally why the parade had to be postponed.  The health and safety of all, which includes the thousands of firefighters, police offices and health care workers who take part in our parade, is paramount,” Sean Lane, the parade’s chairman, told the Irish Voice.

The pre-dawn parade that lasted about an hour had the blessing of the NYPD and city officials, and what few New Yorkers happened to be on the streets at the time.  Several passers-by shouted “Happy St. Patrick’s Day” to the determined marchers and saluted the Fighting 69th as they once again led the way.

People waiting at bus stops took their phones out to record videos, those holding cardboard cups of coffee held them up in solidarity, and though roughly two million spectators were missing and thousands of marchers were too, the point was made – New York will always be Irish on St. Patrick’s Day.

Members of the Fighting 69th, which has led the parade since 1851, started gathering at their Armory well before six in the morning, donning the traditional boxwood sprig and some holding shillelaghs.  Hilary Beirne, the long-time chief parade organizer and chairman of its foundation, was also there unfurling his committee’s banner and marveling at the dedication of the 69th members.

Read More: All St. Patrick's Day parades in Ireland canceled due to coronavirus

“The parade is in their blood,” Beirne told the Irish Voice.  “Even though the Regiment isn’t majority Irish anymore, taking part in the parade is so important to them.  It’s their history.”

As they do each March 17 morning, the Fighting 69th members and guests gathered in a meeting room for a pre-parade toast, this year using their own Fighting 69th Irish whiskey which was launched in 2019.  Members of the Regiment stationed in Kuwait were also present via video link to wish their colleagues well.

Colonel Jim Tierney has been marching since, “well, I don’t want to tell you…many years ago! I started when I was five years old,” he said.  “My father was veteran of the 69th. First time I didn’t march was when I was in basic training with the 69th.  It’s a great tradition.”

Command Sergeant Major Tom Seifert has been marching since 1996, save for a year when he was deployed in Iraq.  “We had a little ceremonial parade in Iraq that year but I didn’t get to march because I was on patrol,” he said.

“For us it’s history. The 69th is an honor guard to protect the parade, so it’s a high honor for us.”

Patti-Ann McDonald, the widow of New York’s NYPD hero, Detective Steven McDonald, was on hand to blow the ceremonial whistle to start the march.  She was selected by the organizers to be the first woman to do so and her son Conor, an NYPD sergeant, was there to show support.  Steven McDonald never missed a march, and Patti-Ann was thrilled to be able to make a bit of parade history of her own.

“Steven is with us right now, that’s for sure,” she said.

Though the march was so much smaller, it was still a march and an historic one at that, Conor added.

“We were part of an epic morning that you only hear about in legends,” he said.

Tom Tuffy, the immediate past president of the United Irish Counties, was the lone 2020 grand marshal aide to march on Tuesday; the grand marshal himself, James Callahan, wasn’t there “because we want to give him the big day that he deserves,” said Lane.

The 2020 New York City St. Patrick’s parade, like so many all over the world, was postponed, and it is hoped that rescheduling later this year will be possible.  But there was no talk of that early Tuesday morning.  What mattered most was showing that Patrick was much stronger than Corona on the most special day of the year for the Irish.

Did you witness the 2020 NYC St. Patrick's Day parade? Tell us about it in the comments!