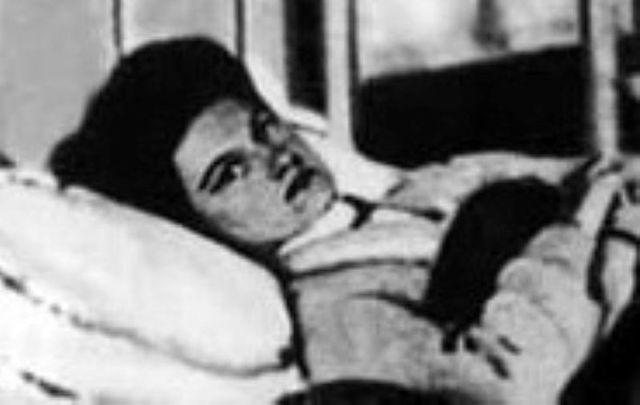 Mary Mallon, a cook from Co Tyrone, was suspected to be at the center of a Typhoid epidemic in New York. She was even described as the most dangerous woman in America.

“Typhoid Mary” was born Mary Mallon on September 23, 1869, in Cookstown, Co. Tyrone. Like so many people in post-famine Ireland, Mary emigrated to the United States in 1884. Upon arriving in New York, she began working as a domestic servant, and with a flair for cooking, she soon became a household cook for several families.

Mary unknowingly spread typhoid fever during her tenure as a cook for several families throughout the New York area. But it only became apparent she was a healthy carrier of the bacteria after she was hired as a cook for an upper-class family in Long Island.

A New York banker Charles Henry Warren hired Mary as a cook for the families' summer vacation in Oyster Bay, Long Island. Soon after their arrival one of Warren's daughters fell ill with typhoid fever. Following this Mrs. Warren and two maids became ill as well as the gardener and another Warren daughter. In the end, six of the eleven people in the house were diagnosed with typhoid.

The owners of the house where the Warrens had been staying wanted to find the cause of all the illness so they hired George Soper, a civil engineer with experience in typhoid fever outbreaks. It was Soper who discovered that Mary was the carrier. as she had left the Warren household three weeks after the outbreak.

He began researching her employment history and discovered that typhoid outbreaks had followed the Tyrone woman from job to job. Satisfied that this could not be a coincidence, Soper decided to confront Mary as he needed a blood and stool sample to prove she was the carrier.

In March 1907 he found her working again as a cook in the home of Walter Bowen and his family. According to Judith Walzer Leavitt’s book on Typhoid Mary, Soper approached Mary in the kitchen and challenged her:

“I had my first talk with Mary in the kitchen of this house...I was as diplomatic as possible, but I had to say I suspected her of making people sick and that I wanted specimens of her urine, feces, and blood. It did not take Mary long to react to this suggestion. She seized a carving fork and advanced in my direction. I passed rapidly down the long narrow hall, through the tall iron gate, ...and so to the sidewalk. I felt rather lucky to escape.”

Realizing he would not have any success on his own he approached Hermann Biggs at the New York City Health Department who agreed with his hypothesis. The pair enlisted the help of Dr. S. Josephine Baker and again tried to approach Mary.

When they confronted Mary again she refused to talk to them and threatened them with kitchen implements before fleeing the scene. After an extensive search, they later found her in a neighbors closet and Dr. Baker described her emergence:

“She came out fighting and swearing, both of which she could do with appalling efficiency and vigor. I made another effort to talk to her sensibly and asked her again to let me have the specimens, but it was of no use. By that time she was convinced that the law was wantonly persecuting her when she had done nothing wrong. She knew she had never had typhoid fever; she was maniacal in her integrity. There was nothing I could do but take her with us. The policemen lifted her into the ambulance and I literally sat on her all the way to the hospital; it was like being in a cage with an angry lion.”

Mary was taken to Willard Parker Hospital in New York where typhoid bacilli were found in her stool. The hospital then transferred her to an isolated cottage that was part of Riverside Hospital.

Mary could not understand why she was being persecuted. In her own mind, she was perfectly healthy. She could not comprehend how she could spread disease and cause deaths when she exhibited none of the symptoms herself.

“I never had typhoid in my life, and have always been healthy. Why should I be banished like a leper and compelled to live in solitary confinement with only a dog for a companion?”

Two years after her isolation on North Brother Island Mary sued the Health Department. During her two-year confinement, health officials analyzed Mary's stool samples once a week. The samples came back mostly positive. However, Mary also sent her stool samples to a private lab where all her tests proved negative for the typhoid bacteria which made her think now more than ever she was the victim of unfair persecution.

When her case came to court the judge ruled in favor of the health officials and noted that Mary was now popularly known as “Typhoid Mary”. However, in 1910 a new health commissioner decided that Mary could be released from quarantine as long as she never worked with food again. Finally, the Tyrone woman was allowed to walk free.

She began working in a laundry but soon after became tired of the poor wages in comparison to when she was a cook. Mary then still believing that she posed no risk to anyone changed her name to Mary Brown and once again took up a paid position as a cook.

The cycle started again. Nearly five years after her release when an outbreak of typhoid fever in the Sloane Maternity Hospital occurred it was discovered they had recently hired a new cook called Mrs Brown. Any sympathy she had from people after her release quickly disappeared when they discovered that she had wittingly caused pain and suffering to those who were infected.

Once again she was sent back to North Brother Island to live in the same isolated cottage. Details of her life on the island are scant but it is known that she helped around the hospital.

She suffered a large stroke in 1932 that left her paralyzed. She was then transferred to the children's wing of the hospital where she spent the following six years of life until her death on November 11, 1938, aged 69.

This argumentative woman from Tyrone was the first healthy typhoid carrier to be identified by medical science. She became famous after giving rise to the most famous outbreaks of carrier-borne disease in medical history. Throughout her life “Typhoid Mary” was blamed for 51 cases and 3 deaths of typhoid.

North Brother Island on New York's east river where Mary spent a large part of her life has been abandoned and some say her ghost still roams the derelict hospital corridors.