Welcome to St. Patrick’s Day in New York City, 1918, during the Spanish flu pandemic! Let's get a little perspective. 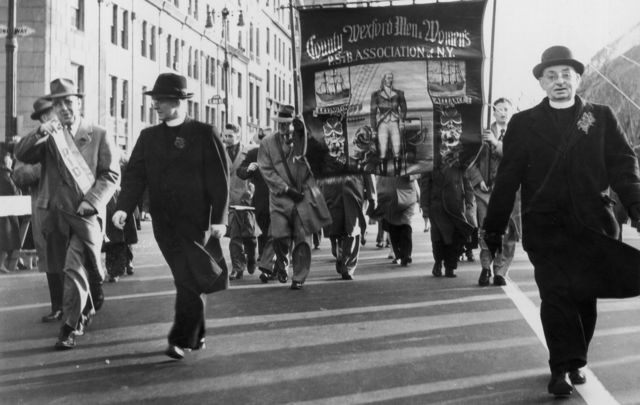 Welcome to St. Patrick’s Day in New York City, 1918, during the Spanish flu pandemic! Let's get a little perspective.

Thousands of revelers lined up and down Fifth Avenue in Manhattan, shouting and cheering and waving Irish and American flags.  This even though there were disturbing reports that a determined virus was making its way around the world, from Europe and Asia to America. Just a week earlier there was a report of an outbreak in Queens!

Read more: Coronavirus is Ireland’s greatest challenge since the Famine

And their fears seemed to have been confirmed when what sounded like an explosion emanated from St. Patrick’s Cathedral. Debris began to rain down upon Fifth Avenue.

None of which will likely calm your many fears about whatever we are calling this corona-thingy these days.  But perhaps it lends a little perspective to a situation that is quickly turning into something out of a Twilight Zone episode, about how panic and paranoia are the deadliest viruses of them all.

Back in March of 1918, it was the Spanish Flu that was beginning its deadly spread across the globe.  Five hundred soldiers at Fort Riley in Kansas were stricken in the run-up to St. Patrick’s Day in what is considered the first major American outbreak of a pandemic that would affect over 25 percent of the world’s population, killing somewhere between 20 and 100 million people.

In other words, nobody really should have been out on Fifth Avenue waving flags and cheering on bagpipers in 1918.

But there they were, many gathered right outside of St. Patrick’s Cathedral.  That’s when concrete debris began “showering in dangerously large fragments down into the streets where thousands were massed awaiting the parade,” as The New York Times reported.

Panic ensued. Just three years earlier, the Times noted, “two Italians...carried a bomb into the cathedral, and one lighted a fuse with a cigar while the heads of the congregation were bowed.”  This was one of several times the church was targeted by terrorists in the early 20th century.

And so the Irish crowd was understandably on edge.  But it turns out the cause of the mayhem was actually a gigantic chunk of stone that had loosened itself from the cathedral’s edifice.

Only Tammany Hall Secretary Thomas F. Smith suffered an injury, his “Wrist Broken in Saving Women,” as a Times headline put it.

Oddly, in the actual story, Smith’s actions don’t seem quite so chivalrous, with his injury a “result of a fall during the stampede to empty the reviewing stand.”

Anyway, for all of the tiresome controversies and ignorance that the big parade attracts, there is something comforting in it as a symbol of Irish America’s ability to still celebrate their patron saint and their heritage -- to, if you will, simply march on.

A new book reminds us that such celebrations were not only held during Ireland’s darkest hour -- the terrible Famine year of 1847 -- but were transformed into efforts to alleviate that suffering.

“Maybe because Americans knew they were part of something much larger than themselves in 1847, the widespread desire to provide relief to Ireland also unified the United States -- for a short time at least -- in a way it hadn’t been since the adoption of the Constitution 60 years earlier,” author Stephen Puleo writes in his new book Voyage of Mercy: The USS Jamestown, the Irish Famine, and the Remarkable Story of America’s First Humanitarian Mission (St. Martin’s Press).

The urgency of the relief mission picked up -- fittingly -- right around St. Patrick’s Day.  Puleo writes that March “was the worst month thus far” of the Famine.

It was a “happy coincidence,” Puleo adds, that the Boston Laborers’ Aid Society “were almost entirely of Irish descent and that their [relief] work commenced on St. Patrick’s Day.”

Something to keep in mind this St. Patrick’s Day, as we wet our whistles and fill our bellies.

But I’d keep the hand sanitizer close by as well.