The Department of Homeland Security did not include Ireland in its list of European nations affected by Trump's coronavirus travel ban announced on Wednesday night. 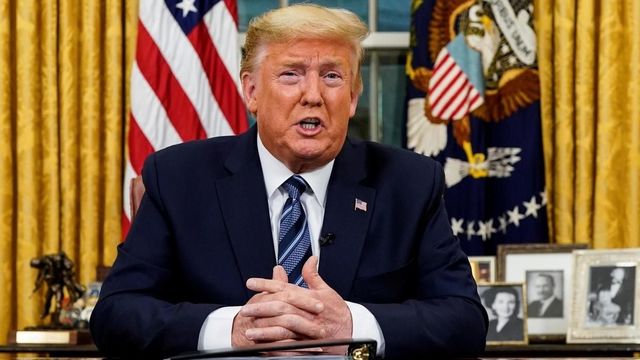 The Department of Homeland Security did not include Ireland in its list of European nations affected by Trump's travel ban announced on Wednesday night.

President Trump announced on March 11 that all flights and travel from Europe into the United States will be halted from midnight on Friday for 30 days. However, a later statement from the Department of Homeland Security indicated that Ireland would not be included in that ban.

During a live televised address delivered at 9 pm EST on March 11, President Trump said: “The European Union failed to take the same precautions and restrict travel from China and other hotspots. As a result, a large number of new clusters in the United States were seeded by travelers from Europe.

We will be suspending all travel from Europe, except the United Kingdom, for the next 30 days. The policy goes into effect Friday at midnight. pic.twitter.com/Yeq1gVCIln

“After consulting with our top government health professionals, I have decided to take several strong but necessary actions to protect the health and wellbeing of all Americans.

“To keep new cases from entering our shores, we will be suspending all travel from Europe to the United States for the next 30 days.

“The new rules will go into effect Friday at midnight.

“These restrictions will be adjusted subject to conditions on the ground. There will be exemptions for Americans who have undergone appropriate screenings and these prohibitions will not only apply to the tremendous amount of trade and cargo, but various other things as we get approval.

“Anything coming from Europe to the United States is what we are discussing. These restrictions will also not apply to the United Kingdom.

“At the same time, we are monitoring the situation in China and South Korea and as their situation improves, we will re-evaluate the restrictions and warnings that are currently in place for a possible early opening.”

However, not long after the address, Chad Wolf, the acting secretary of the Department of Homeland Security, issued a statement indicating that only nations within Europe's Schengen Area would be subject to the travel ban:

The action @POTUS is taking to deny entry to foreign nationals who have been in coronavirus-affected areas will keep Americans safe & save lives. These are not easy decisions but they are required. I will issue guidance within 48 hours outlining details.https://t.co/KYXE7JKswC pic.twitter.com/zgi6r5FoZq

Wolf wrote: "Today President Donald J. Trump signed a Presidential Proclamation, which suspends the entry of most foreign nationals who have been in certain European countries at any point during the 14 days prior to their scheduled arrival to the United States.

The ban on incoming travel from Europe comes after the US placed a similar ban on foreign nationals who have visited mainland China or Iran in the past 14 days. American citizens who have visited those areas within the last 14 days will be permitted to enter the US, but will be subject to health screenings.