President Trump's travel ban may not include Ireland, but the confusion was immediate. 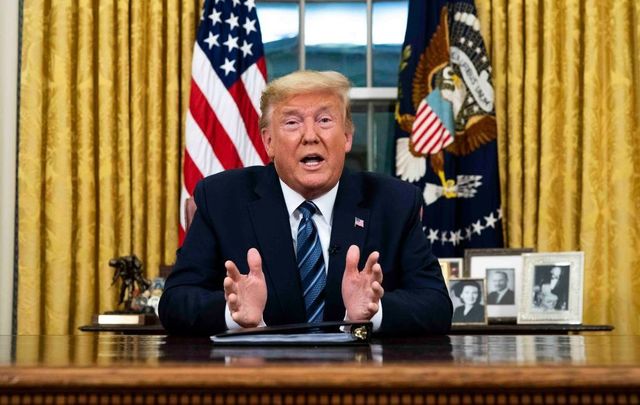 President Donald Trump announces a travel ban to and from the EU... but not Ireland. Getty

President Trump's travel ban may not include Ireland, but the confusion was immediate.

During a low-key primetime speech last night, President Trump announced new restrictions he is imposing on travel between the United States and Europe, apparently putting Ireland in the crosshairs.

Trump said, "We will be suspending all travel from Europe to the United States for the next 30 days," eventually adding that there will be "exemptions" for Americans who have undergone appropriate screenings.

This vitally important "some exemptions" caveat did not come in time to prevent mass confusion at the nation's airports, with passengers and some ground staff at the Aer Lingus departure gate at JFK assembling for the flight to Dublin last night uncertain if their plane would fly, and if so would passengers who boarded be able to return to the US?

From a friend at JFK about to board a flight to Dublin just a few minutes after Trump Europe travel suspension announced.

“If the leader of the free world is telling you that, you know your travel is being affected I would think that we have to give you your money back.” pic.twitter.com/H3FAusQWkG

But it turns out those "exemptions" are as porous as Swiss cheese. They will apply to all US legal permanent residents, citizens and some of their family members according to the Department of Homeland Security.

The confusion was a needless as it was insulting, but from day one the Trump administration's high handed response to this crisis has been completely dismissive when it has not been chaotic.

"It was unclear why the UK would be exempted as, among other things, its health minister currently has coronavirus." https://t.co/BBYeIOWaZf

Ireland has good reason to take offense. It's almost Saint Patrick's Day and parades from Dublin to Tokyo to New York City have all been reluctantly called off.

These developments represent a massive blow to Ireland's tourism market, its economy, and the nation's brand promotion on the world stage - but last night President rubbed salt in the wounds of a nation already reeling from the coronavirus pandemic.

As though to further insult Ireland, it was announced last night that the reception for the Irish Taoiseach (Prime Minister) Leo Varadkar has been canceled. The White House has canceled the Thursday reception to celebrate St. Patrick’s Day CNN reports.

On Tuesday Senators were left reeling by an update they sought themselves after White House foot-dragging. Dr. Brian Monahan, the attending physician of the U.S. Congress and Supreme Court, personally briefed Senate staff in a closed-door meeting that he expects anywhere from 70 up to 150 million people in the U.S. to contract the coronavirus.

Dr. Monahan's warning contrasted starkly with Trump and Pence's suggestion, made just two days ago, that we all "stay calm" because it "will all go away."

Meanwhile, medical researchers at the National Institute of Allergy and Infectious Diseases have found that viable virus could be detected for up to three hours after exposure in the air, up to four hours on copper, up to 24 hours on cardboard and up to two to three days on plastic and stainless steel.

Events have overtaken the White House and it has failed to get ahead of either the coronavirus or the messaging to the United States and the world. America needs real leadership now, and it's past time we had it.