All St. Patrick's Day parades in Ireland canceled due to coronavirus

The Irish Cabinet's sub-committee advised on Monday that all St. Patrick's Day parade scheduled in Ireland be canceled due to do coronavirus. 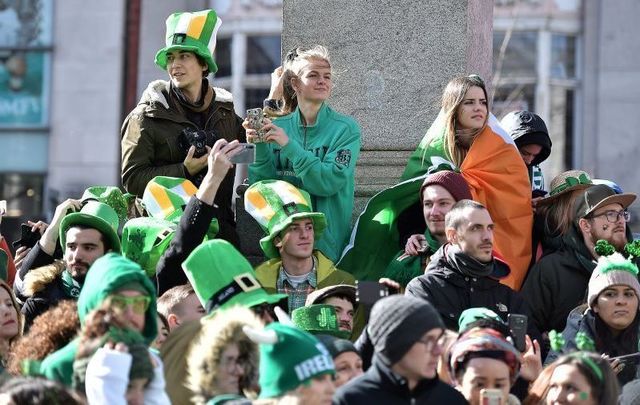 Dublin's St. Patrick's Day parade has been canceled for the second time this century. Getty Images

The Irish Government has canceled all St. Patrick's Day parades in Ireland amid growing concerns over a coronavirus outbreak.

Ireland's special Cabinet Committee on Covid-19, which met on Monday, March 9, decided "the next phase of Ireland’s response to the global and national public health emergency arising from Covid-19."

In a statement issued on March 9, the committee said: "Due to the unique nature and scale of the St. Patrick’s Day festivities, in terms of size, the mass gathering of local and international travelers, and the continued progression of community transmission in some European countries, along with the emergence of a small number of cases of local transmission in Ireland, the Government has decided that St Patrick’s Day parades, including the Dublin parade, will not proceed.

"This is based on the advice of the National Public Health Emergency Team [NPHET]. The situation in relation to other events and mass gatherings remains under review and any response will be guided by the NPHET which meets again tomorrow, along with the public health advice."

The committee additionally said that while Ireland remains in the Containment Phase, it will move towards Delay and Mitigation Phases in the coming weeks and months.

A package of reforms was also agreed for sick pay, illness benefit and supplementary benefit designed to ensure that employees and the self-employed can abide by medical advice to self-isolate where appropriate while having their income protected.

Read More: Confirmed coronavirus cases in Republic of Ireland more than doubles in one day

Dublin's parade is the largest St. Patrick's Day parade in the country. Organizers of the St. Patrick's Day Festival in Ireland's capital city issued a statement that indicated its Cultural Programme will still go ahead.

Dublin's parade was last canceled in 2001 due to an outbreak of Foot and Mouth Disease, which stems from cattle. The parade was held in May instead.

There was a clamoring for the parade to be canceled on social media since it would be the perfect breeding ground for the virus.

On Monday evening, it was revealed that there were three new cases of coronavirus confirmed in the Republic of Ireland, bring the total to 24, according to RTE.

The majority of the cases in Ireland are traced back to northern Italy, which has become the worst-hit nation after China regarding the amount of confirmed cases.

As of Monday, there are more than 113,000 confirmed cases of coronavirus worldwide, and close to 4,000 deaths. More than 62,000 people, however, have recovered.