Maureen O'Hara, the star of The Quiet Man, sued Confidential magazine in 1957 for libel after they ran a story about her engaging in an affair at a Hollywood theater. 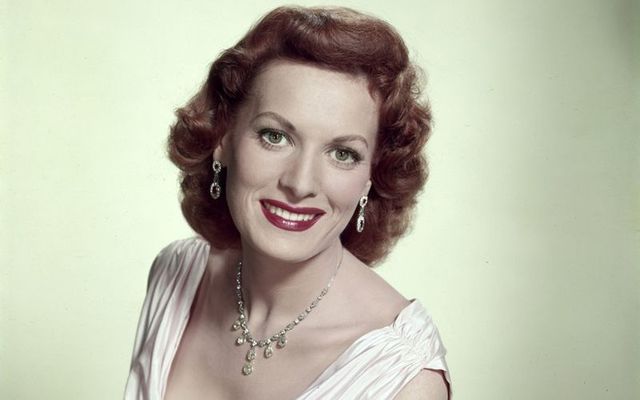 Star of "The Quiet Man" from Dublin, Maureen O'Hara.

The libel case taken by Maureen O'Hara against Confidential magazine was revisited in a 2019 episode of the "You Must Remember This" podcast.

Confidential, considered The National Enquirer of its day, ran a sensational story in 1957 entitled "It was the Hottest Show in Town when Maureen O’Hara Cuddled in Row 35” which claimed that Irish starlet Maureen O'Hara and a Latino man had been seen making out at Grauman's Chinese Theater in Hollywood.

According to Confidential, the manager of the theater had seen the pair stretched out across three seats with the Latin lover on top, and he had to ask them to leave. They didn't, and he came back again to see O’Hara seated in the Latino man’s lap, so he threw them out.

As the Confidential writer noted, “Maureen had entered Grauman’s wearing a white silk blouse neatly buttoned. Now it wasn’t. The guy had come in wearing a spruce blue suit. Now he wasn’t. The coat was off, his collar was open, and his tie was hanging limply at half-mast in the steam.”

The allegation was shocking - O’Hara had a pristine reputation, a conservative Irish lass with no time for casting couch shenanigans.

At the time of the Confidential story, O'Hara already had two marriages to her credit. One with George Brown - the father of the famed magazine editor Tina Brown - who she met on the set for Jamaica Inn, her first film, shortly before she set out for Hollywood from Ireland. Their marriage was annulled in 1941. 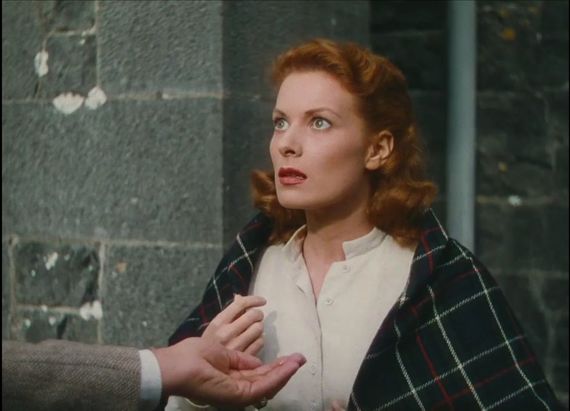 Maureen O'Hara in "The Quiet Man".

In the United States, O'Hara fell in with one William Price, a legendary boozer when he wasn’t hooking up in whorehouses. In his spare time, he was an unemployed producer. This second marriage ended in 1951.

“I think at first I was just so happy to be included in his life and have him show a sincere interest in mine. When I was with Enrique, we were inseparable,” she said.

She was certainly dating Hernandez and passionately in love at the time she was reported to have had an amorous evening at the movies by Confidential.

The fact that Hernandez was Hispanic added to the scandal. In the atmosphere of the time, Hispanics were considered lower-class peasants. That angle would certainly not be lost on Confidential, notorious for using the race and anti-gay codes.

Strangely too, Grauman’s was known as a place where Hollywood stars having affairs arrived separately took seats in the back row and had it on, not risking being seen at a hotel.

Of course, Confidential knew this and paid handsomely for ushers or managers to report Hollywood star sighting. O’Hara was a big fish.

She was spread across three seats - with the happy Latin American in the middle seat. They stopped when the usher flashed his flashlight at them but Confidential reported, “The manager had hardly returned to the candy stand out front before the usher from aisle C was on his heels with the breathless announcement, ‘They’re at it again!’”

The libel trial against Confidential

Confidential was a magazine that had lost a libel suit to the famed pianist Liberace when they suggested his theme song be “Mad About the Boy.” The State of California had wanted to shut down Confidential for some time and they sued it for libelous stories. O'Hara's case was one of those included.

According to the Los Angeles Times, O'Hara and other entertainers filed suit against Confidential after being recruited by actor and future US Senator George Murphy. While others dropped out of the suit, O'Hara persisted.

O’Hara’s defense was clear. She was a nice Irish girl who would never do that. She even brought her sister, a nun, along as a character witness.

She ultimately disproved the Confidential story by producing a passport stamp that confirmed she was in Spain filming "Fire Over Africa" when the tabloid had placed her in the Hollywood theater.

The defense pointed out,  however, that no one seemed to be certain of the exact date three years after it happened, and it could very well have been when O'Hara was in the country.

The jury deadlocked and the state reached a deal with Confidential about their prying coverage. O’Hara claimed vindication but the mystery remains.