New York Governor Andrew Cuomo confirmed reports that the NYC St. Patrick’s Day parade will not go ahead on March 17. 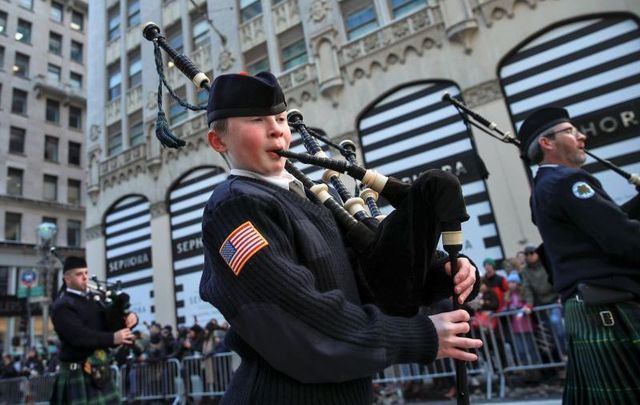 New York Governor Andrew Cuomo confirmed on Wednesday that the NYC St. Patricks Day parade will not go ahead on March 17. Getty Images

New York Governor Andrew Cuomo confirmed that the NYC St. Patrick's Day Parade will not go ahead on March 17.

NEWS: The organizers of the St. Patrick’s Day Parade in NYC have agreed to postpone the parade given the evolving #Coronavirus situation.

I thank the parade's leadership for working cooperatively w/ us.

We believe postponing the parade is in the best interest of public health.

A press release posted on the Governor's website late on March 11 reads: "Today I had several conversations with the organizers of the St. Patrick's Day Parade to determine whether the parade should move forward in light of the evolving coronavirus situation and increased case count in the New York City area," Governor Cuomo said.

"Following those conversations, I recommended and the parade's leadership agreed to postpone this year's parade due to the high density and the large volume of marchers and spectators who attend. While I know the parade organizers did not make this decision lightly, public health experts agree that one of the most effective ways to contain the spread of the virus is to limit large gatherings and close contacts, and I applaud the parade's leadership for working cooperatively with us. While the risk to New Yorkers remains low and we want to avoid social and economic disruptions, we have an obligation to take action to contain the spread of this virus."

At the time of this update, no notice of postponement has been shared on the NYC St. Patrick's Day Parade website or Facebook page.

The below was published at 4 pm on March 11:

However, the hope is that the parade, which marched up Fifth Avenue for 258 straight years, will be rescheduled for a date later in 2020.

The decision isn’t surprising considering that a number of prominent St. Patrick’s Day parades have been canceled around the country and the world, including the march in Chicago which was announced earlier today.

“Postponing instead of canceling is what’s being talked about,” a New York parade source told the Irish Voice.

“The parade is such an institution and has such a great history and everyone involved knows that.”

Cuomo gave a news conference on Wednesday afternoon in which he discussed the parade – sometimes in a faux Irish accent – and said he would reveal his decision about its fate later in the day.

Earlier on Wednesday, New York City Mayor Bill de Blasio said of the world’s most famous parades: “We’re talking it through with the parade committee.

"We have to really think about this one because it’s a beloved event, an important event.  It’s not a slam dunk to say this is something to be instantly canceled. On the other hand, there are real concerns.”

Several marching bands had already withdrawn from this year’s march because of the spread of the coronavirus, and even if the march had gone ahead, the event would have been smaller in scale with greatly reduced numbers watching from the sidelines.

"The NYC St. Patrick’s Day parade Inc.™ has been held every year since 1762.
We have received no notice from the authorities about postponement at this point. We recommend checking with your local health officials, government,  and where appropriate, your personal physician for guidance."

Lane encouraged the public to be up-to-date on advice from health officials, adding: "We need to work together as a community to protect the most vulnerable among us."