Irish American James Callahan, the president of the International Union of Operating Engineers (IUOE), is looking forward to finally leading the march for the NYC St. Patrick's Day Parade after two postponements. 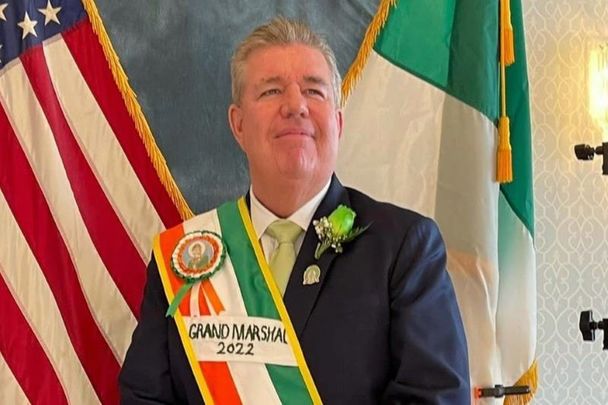 First set to lead the New York City St. Patrick’s Day Parade as grand marshal in 2020, and again in 2021, the pandemic quashed James Callahan’s march up Fifth Avenue. But it’s full steam ahead for the Irish American union boss and the world-famous parade this March 17.

“It’s been a long run and I have three sashes to prove it,” laughs Callahan, the general president of the 400,000 member International Union of Operating Engineers (IUOE) in North America.

Three years as grand marshal is unprecedented, but thanks to the coronavirus pandemic which stunned the world in March of 2020, Callahan’s march up Fifth Avenue was postponed until now. A greatly shortened pre-dawn, no crowds march in 2020 and 2021 to keep the parade’s 260 consecutive year tradition alive will be replaced with the usual bands and pageantry this Thursday, March 17, and Callahan is more than ready to lead the way.

“It’s been a great honor and it’s quite surreal to be chosen to lead the greatest parade in the world,” Callahan told the Irish Voice, sister publication to IrishCentral, during a Monday interview.

“It’s only right that after two years and all the suffering we’ve been through that the parade is returning to Fifth Avenue. What better sign of the beginning of spring than the parade, which is a big signal that we are ready to move forward.”

A powerful and encouraging speech from Grand Marshal James Callahan about how our parade will be the first event to tell the world that we are back better than ever from 2 very difficult years.

Covid-19 stopped what should have been Callahan’s time to lead the 2020 parade, but the world was quickly isolating and an Irish party was not a priority.

“The devastation put everything in perspective People were suffering.  Being the grand marshal wasn’t a matter of life or death,” Callahan recalled.

It was assumed that 2021 would bring a return of the Irish to Fifth Avenue, but as the pandemic raged and vaccines had just become available, a full-on parade wasn’t on the cards. Which meant that Callahan had to put his second sash back in the drawer.

“By the time we got to the end of 2020 the writing was on the wall for 2021. So I took it in stride because there was nothing that could be done and people were dying and suffering,” Callahan said.

He offered to step aside as grand marshal for this year to give someone else the opportunity, but the parade’s chairman Sean Lane wouldn’t hear of it.

So it’s third time lucky for the native Long Islander. If by some crazy chance things go wrong in two weeks, Callahan reckons that it will be his fault.

“Believe me, there are people I know around the country who have brought that to my attention, that I could be bad luck,” he laughs.

With all four of his grandparents being natives of Ireland, Callahan was steeped in Irish traditions growing up in the Nassau County town of Hicksville. He even used to play hooky and ride the Long Island Railroad into Manhattan on March 17 with his friends.

“It’s definitely funny to think that from that time, one day I would lead the parade,” he says.

The Callahans were regulars at local Irish events when they weren’t working hard. Callahan’s maternal grandfather, from Co Cork, was an operating engineer who immigrated to Boston and wound up working all over New York on the seaways and digging canals. His father was employed with Pan American Airways.

Talk around the dinner table often centered around union happenings and young Jim, who liked to fix cars in his spare time, was paying attention.

“Joining a union was always in the back of my mind, but I have to say as a tribute to my parents, they supported all opportunities for their kids. I have a brother who is a nurse anesthetist and two brothers who are in construction management. My father wasn’t insisting that we had to have union jobs,” Callahan recalled.

Callahan secured a union job as a heavy equipment mechanic and graduated into crane work, fixing and assembling the huge machines on various New York City job sites. The work is as hi-tech as it sounds – “fixing cars when I was growing up was a really helpful entree,” he notes – and eventually he transitioned into management, becoming a shop steward. In 1993, he was the maintenance foreman at the World Trade Center’s parking garage which has to be reconstructed after the 1993 terrorist attack.

“Eight years later, as a local union business agent, Callahan found himself back at the World Trade Center. This time, he was one of the many operating engineers who responded immediately to the September 11 tragedy and he stayed on to work through the entire recovery effort at Ground Zero,” his official biography notes.

In April of 2013, Callahan was elected to his first full term as general president of the IUOE, which is based in Washington, D.C. Callahan is a frequent commuter between the nation’s capital and his home base on Long Island.

“I always try and stand on the shoulders of those who came before me. The job is great but can be daunting at times. I have a terrific administration. We try and deliver for our members, making sure that they get properly compensated and can retire with dignity when the time comes,” he said.

Callahan feels that task is made easier by the current occupant of the White House, Joe Biden.

“The administration is union-friendly. We have a president who isn’t afraid to say the word union. The things we’ve faced with past administrations – and will again with future ones – is that they feel that people who work for a living shouldn’t have a voice. And that has been very concerning for us.”

The IUOE represents high skilled workers all over the U.S. and Canada, including heavy equipment operators, mechanics, and engineers who run operations and maintenance functions in huge buildings. Chances are that the high-pressure boilers or AC units in big city buildings are run by IUOE members.

Many of those workers had to pivot during the pandemic due to changing building safety codes mandated by the CDC. “Our members made sure our cities were viable and ready to be reopened. My operating engineers kept our buildings safe. They met the challenges seamlessly,” Callahan notes.

Callahan and his wife Fran have three sons, all of whom will be marching with him on March 17, as will his extended family members and plenty of friends. It will be a proud day made even better with the parade’s planned tribute to the first responders who worked through thick and thin these past two years.

“They are the real heroes. And in some cases, their work was politicized. These men and women made sure our country survived. I can’t say enough about them,” Callahan says. “And I look forward to being with them on St. Patrick’s Day.”