Ireland's Distinguished Service Awards Ceremony 2022 was a "perfect case study in the concept of the connectivity of the Irish diaspora." 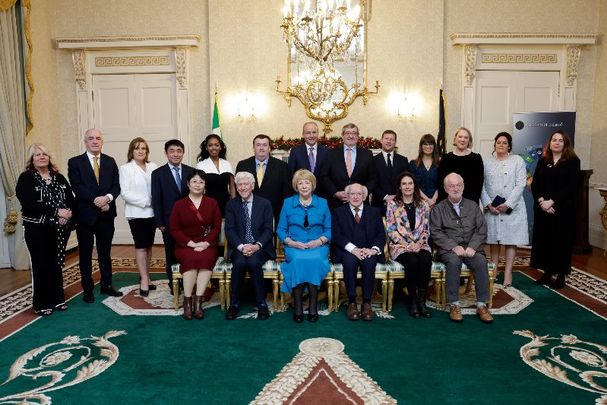 If Ireland did royal occasions then it would look something like last Thursday night in Áras an Uachtaráin, the official residence of the president, when President Michael D. Higgins presented Distinguished Service Awards to members of the Irish diaspora that had made major contributions either to Ireland, Irish communities abroad, or to their host countries.

In the words of Minister of Foreign Affairs Simon Coveney, the awards are for people who had “burnished Ireland's reputation across the globe.”

The event was attended by senior politicians in the government including Taoiseach Micheál Martin, Coveney, and Diaspora Minister Colm Brophy. Leader of the opposition Mary Lou McDonald of Sinn Féin was also there along with the country’s top civil servants.

Following a ceremony in the Áras where Higgins and his wife Sabrina circulated freely, the honorees and their guests were wined and dined in the Edwardian splendor of Farmleigh House, where the Irish government hosts dignitaries.

Last night, President Higgins presented this year's recipients of the Presidential Distinguished Service Award with their awards at Áras an Uachtaráin. First awarded in 2012, the Awards recognise the contribution of members of the Irish diaspora across the world pic.twitter.com/YEgjRAdvhs

It is ironic that those countries which lost the most through emigration now stand to have the greatest benefit from engagement with the descendants of those that have left. But it is a two-way street and increasingly there is a growing demand for a direct input into Irish elections by the diaspora.

Coveney in his remarks alluded to this and his hope that the next presidential election will allow for overseas voters. This will require a referendum, long promised but still to be delivered.

Notwithstanding, this unfinished business the diaspora is of enormous significance to Ireland, representing as it does overseas resources that can contribute to and support economic growth and development. In this regard, the US Irish diaspora is definitely one of the most important.

No surprise then that this year’s recipients included four people who are living in the US. First up was the amazing TikTok sensation Morgan Bullock, the Virginia-born Irish dancer who has progressed from learning Irish dancing at the age of 10 to being a cast member of Riverdance. Along the way, she amassed over one million likes and almost 80,000 followers on the social media site.

In a year when traditional Irish dancing’s reputation has hit rock bottom, Morgan’s fresh and energetic approach has helped this Irish cultural art form reach new audiences and created admirers of her skills and talents. As a Black Irish dancer, she courageously faced down her critics when accused of cultural appropriation following her interpretation of the hip-hop track “Savage” which went viral.

She is an embodiment of the principle of an “affinity diaspora,” which is defined as people who hold a deep appreciation for Irish people, places, and culture. 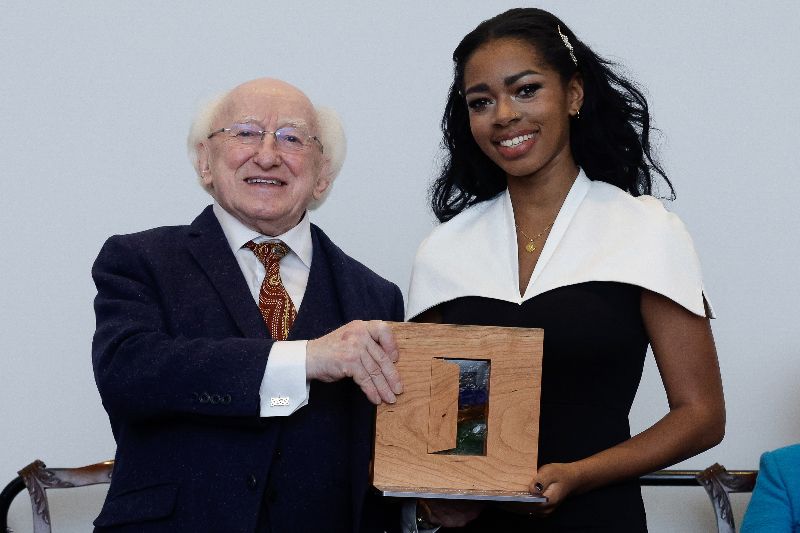 Joseph M. Hassett was also an awardee. He is a top attorney in Washington, D.C. with Hogan Lovells and has argued in appellate courts all over the country and in the United States Supreme Court. He is also an accomplished WB Yeats scholar.

Both Hassett and Bullock’s nomination goes to the heart of Article 2 of the Irish Constitution which states, “The Irish nation cherishes its special affinity with people of Irish ancestry living abroad who share its cultural identity and heritage.” 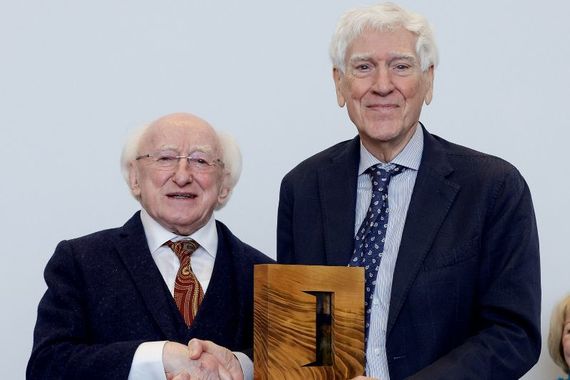 The other US recipients of the 2022 award were husband and wife team Orlaith and Ciarán Staunton. Orlaith, who is my sister and hence my invite to the awards, and Ciarán are the co-founders of END SEPSIS, which is credited with saving countless lives through the introduction of Rory’s Regulations which require all New York hospitals to be proactive about sepsis.

The regulations, which are considered the gold standard in patient care, are named after their son Rory who tragically died from sepsis at the age of 12. Rather than being embittered by the heartbreak that befell their family, they turned their sadness into a powerful force for good and have left an enduring life-saving legacy for future generations.

Their daughter Kathleen provided one of the lighter moments of the evening when she failed to recognise Martin and asked him what he worked at. When he replied that he was Taoiseach she asked him innocently what he was teaching. Cue laughter all round. Indeed Martin was very much at ease in what was one of the last public functions he would attend in that role with the Cabinet reshuffle due later this week. 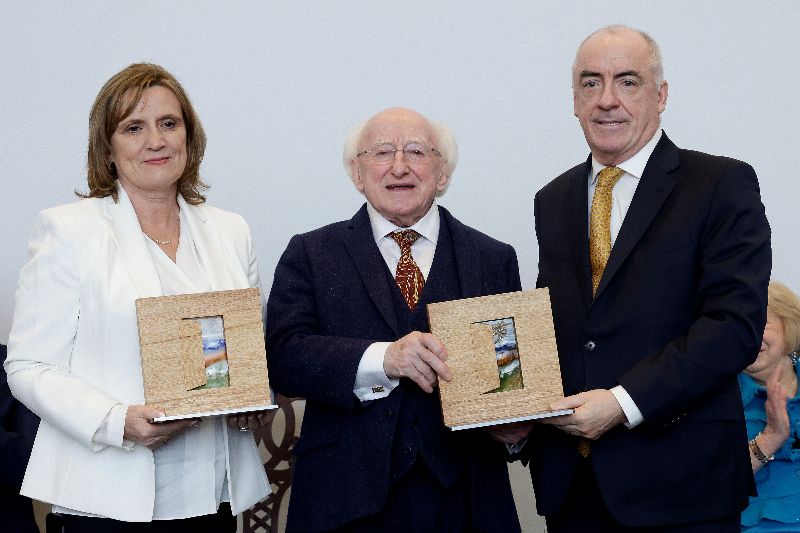 Healthcare and the pandemic figured prominently in the awards. In attendance to pick up an award was Michael J. Dowling, president, and CEO of Northwell Health, New York's largest healthcare provider which played a pivotal role in treating Covid-19 patients. He was nominated in 2020 but because of the pandemic couldn’t collect his honor until this year. 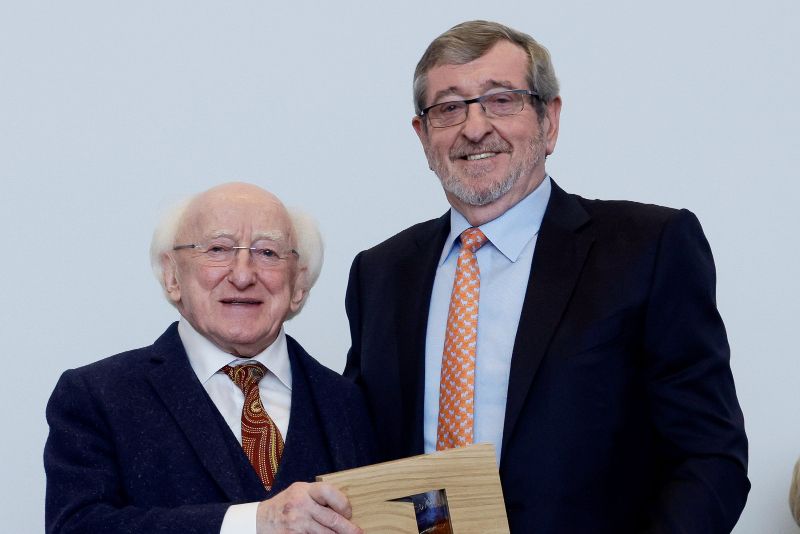 Teresa Lambe, an Irish scientist working at Oxford University, was almost as ubiquitous as Dr. Anthony Fauci on TV screens on this side of the Atlantic during the pandemic. She was one of the co-developers of the Oxford–AstraZeneca Covid-19 vaccine, and her richly deserved award was not the first public acknowledgment of her work in the public health sphere as she had previously received an OBE from the Queen of England. 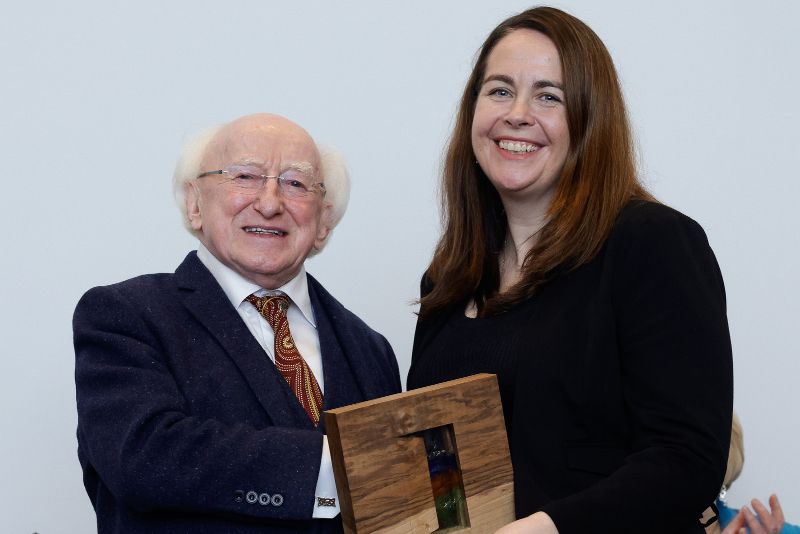 The other awardees included people from sport, culture, the arts, business, innovation, and the community.

Praising the recipients, Higgins remarked that “their actions are an inspiration to so many, an encouragement to us all to put our talents, energy, innovation, and creativity to good use for the benefit of present and future generations.”

The evening was a perfect case study in the concept of the connectivity of the Irish diaspora and the impressive links and interactions that have been established globally. But more than that, it was testament to the positive influence Irish people have had on disparate societies and cultures.

As the roll of honor was read out and the individual achievements listed, it was hard not to feel delight for their accomplishments and admiration for the challenges they overcame. It was a night where we all felt proud to be Irish.

*This column first appeared in the December 14 edition in the weekly Irish Voice newspaper, sister publication to IrishCentral. Michael O'Dowd is brother to Niall O'Dowd, founder of the Irish Voice and IrishCentral.