CLRG passed three of the four motions considered at its Extraordinary Meeting in Belfast on December 10, which was prompted by cheating allegations that have rocked the Irish dance organization. 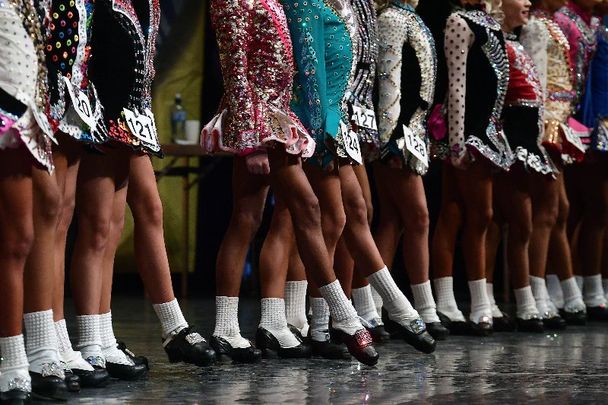 April 10, 2022: Irish dancers on stage during the opening day of the World Irish Dancing Championships at the Waterfront Hall in Belfast, Northern Ireland. Getty Images

James McCutcheon, the Cathaoirleach (Chairperson) of the Irish dance organization An Coimisiún le Rinci Gaelacha (CLRG), is set to remain in his role after a motion calling for his resignation was defeated at an Extraordinary General Meeting (EGM) held in Belfast today, December 10.

McCutcheon issued a statement, seen by IrishCentral, to members and registrants of CLRG on Saturday after the meeting concluded. 56 individuals attended and voted via private ballot at the meeting in Belfast, McCutcheon said.

While the motion calling for McCutcheon to resign was defeated, three other motions were passed which focus on a restructuring of CLRG, a review of the organization's rules, and the rewording of a particular disciplinary procedure.

The EGM was called after an international teacher’s meeting was held on October 25. More than 800 teachers participated in the meeting that found overwhelming support for the four motions that were considered in Belfast today.

In early October, CLRG, the oldest and largest competitive Irish  dance organization in the world, was rocked by allegations of so-called 'feis-fixing.' A complaint, seen by IrishCentral and circulated on social media, implicated at least 12 Irish dance teachers and or adjudicators in asking for certain placements and favors before Irish dance competitions even began. Some of the favors requested were sexual in nature.

Saturday's EGM was held two days after McCutcheon said that CLRG's independent investigation launched after the allegations were lodged has recommended that 44 cases proceed to "full disciplinary hearings."

It is also unclear if those involved would have been partaking in Saturday's EGM.

Below is the statement issued by McCutcheon to CLRG's members and registrants on December 10:

As you will be aware, an Extraordinary General Meeting of An Coimisiún le Rinci Gaelacha took place today Saturday, 10th December from 9:00 am – 6:00 pm. 56 Delegates of the CLRG attended the EGM, representing registrants across the world.

The following motions were passed by private ballot:

Motion 2 – The CLRG source all associated relevant professional expertise required of an independent reputable and important change management consultant firm to undertake a strategic review of CLRG, its constitution, the entire organisational structure including all share and stakeholders and financial report. For 98%, Against 2%.

The Outreach & Development Committee of CLRG will reach out to all registrants worldwide for their input into the creation of parameters to be used to identify a shortlist of independent companies for future employment with regard to the above motion. Registrants should look for a communication regarding this initiative with the aim of providing recommendations at January’s CLRG meeting.

Motion 3 – We request the Rules committee, Coiste Faire and the Údarás jointly review adjudication and competition rules and regulations, disciplinary procedures, and practices to address risks, complaints processes and highlight any deficiencies or flaws and make recommendations to ensure the fairness and protection of Irish dance competitors worldwide. For 93%, Against 5%, Abstained 2%.

In the midst of these deliberations, CLRG strives to keep the best interest of dancers and families to the forefront.

Motion 4 – That disciplinary procedure 3.8.4 be amended to add the words “along with details of the upheld complaint and reasons for the written sanction plus”. It was agreed this motion was passed subject to legal counsel being sought to establish if the change in wording will apply to cases that are already in the process but have not been heard. For 73%, Against 27%.

The following motions were defeated by private ballot:

Motion 1 – A request that the chairperson stands down immediately and that an interim chairperson be installed to conduct the business of that post until such a time as fresh elections. For 34.5%, Against 65.5%.

CLRG is working hard to restore faith and rebuild trust in the organisation following the events of recent months. This is being undertaken with the utmost seriousness and determination which have been reinforced by the votes of the EGM today.

The EGM has provided elected Delegates, representing registrants across the world, with a platform for open and constructive discussion of the challenges our organisation faces.

The result of the private ballot provides a clear mandate on the direction the organisation will now take moving forward. CLRG is fully committed to introducing the changes that have been agreed. We look forward to updating members on our progress and to reconvening at our meeting of CLRG in January.