The independent investigation into complaints lodged with the Irish dance organization CLRG has recommended that 44 cases move to "full disciplinary hearings." 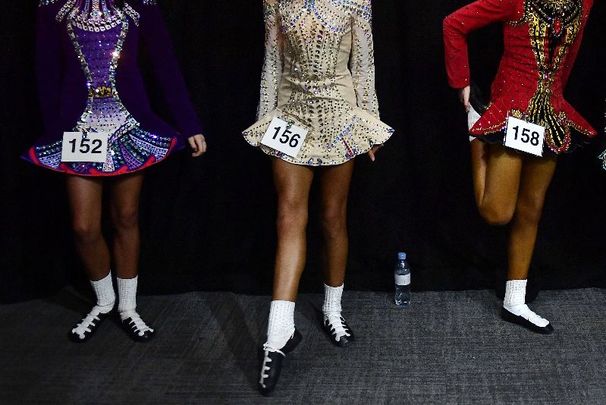 April 10, 2022: Irish dancers wait to be called to the stage during the opening day of the World Irish Dancing Championships at the Waterfront Hall in Belfast, Northern Ireland. Getty Images

James McCutcheon SDCRG, the chairperson of Irish dance organization An Coimisiún le Rincí Gaelacha (CLRG), has written to membership today, December 8, to inform them that the independent investigation has recommended that 44 cases proceed to full disciplinary hearings.

The news of the full disciplinary hearings comes just before the Irish dance organization is set to hold an Extraordinary General Meeting (EGM) in Belfast this weekend. The EGM is set to be in-person only, despite pushback from membership calling for a hybrid option in order to attend virtually.

The EGM was called after an overwhelming majority of teachers within CLRG signaled their desire for McCutcheon to resign as well as an overhaul of CLRG and its policies.

In October, allegations of so-called 'feis-fixing' rocked CLRG, the oldest and largest competitive Irish dance organization in the world. A complaint, seen by IrishCentral and circulated on social media, implicated at least 12 Irish dance teachers and or adjudicators in asking for certain placements and favors before Irish dance competitions even began. Some of the favors requested were sexual in nature.

IrishCentral understands that no Irish dancers have been involved in the seeking of favors, only teachers and adjudicators.

Below is the email issued by James McCutcheon SDCRG, Cathaoirleach of CLRG, on December 8:

As you are aware, An Coimisiún le Rincí Gaelacha initiated a disciplinary process into allegations of wrongdoing which have been widely reported.

Led and overseen by Mr. Justice Michael Peart, a retired judge of the Court of Appeal, the independent investigation has thoroughly examined all complaints, grievances, and all accompanying evidence.

This external investigation team has provided an update on its progress, and in the interests of transparency, we can confirm 44 cases have now been recommended to proceed to full disciplinary hearing. All the individuals involved have been informed and Clauses 3.2.a and 3.2.b of the Disciplinary Procedure have been invoked.

[3.2.a] Where following an investigation into any complaint, a recommendation is made that a disciplinary committee is convened, in the case of any individual elected to An Coimisiún or any of its affiliated bodies, [he/she] will be obliged to temporarily step down from any position held while the process is ongoing. (AGM 2016)

These cases will be heard by an independent External Disciplinary Panel. Recruiting experienced, external individuals for this Panel is underway and will be finalised in due course.

We wish to reiterate that CLRG regards all allegations of wrongdoing with the utmost seriousness. We look forward to the External Disciplinary Panel commencing its work and dealing with these issues as soon as possible.

We would also like to reassure Members that we are fully dedicated to introducing positive changes as agreed and approved by your representatives at An Coimisiún. This is something we are committed to and focused on moving forward.