The messages included in a complaint to the Irish dance organization CLRG about alleged 'results fixing' show the scandalous side of competitive Irish dancing. 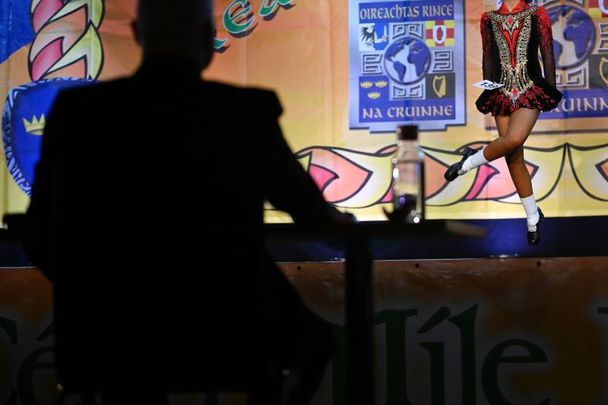 April 10, 2022: A judge watches a competitor during the opening day of the World Irish Dancing Championships at the Waterfront Hall in Belfast, Northern Ireland. Getty Images

As An Coimisiún Le Rincí Gaelacha (CLRG), the largest and oldest competitive Irish dance organization in the world, investigates allegations of 'results fixing,' the details of the messages provided as evidence in the complaint paint an unsavory picture.

IrishCentral has been sent a file that shows the complaints and supporting documentation that was emailed to CLRG in July.

The file has been circulating online throughout Irish dance channels since at least Monday, October 3, though it is unclear who made the file or who began circulating it.

The file implicates 13 Irish dance teachers and or adjudicators. One additional teacher / adjudicator is named, but only by his first name and the initial of his surname.

In the CLRG organization, you must first be a teacher before you can receive your adjudicating accreditation. As such, many adjudicators also have their own students and competitors. The messages in the file seen by IrishCentral show individuals acting in some instances as a teacher, and in other instances as an adjudicator.

It does not appear that any competitors were sending or receiving the messages included in the file seen by IrishCentral.

While not all of the messages in the file seen by IrishCentral are dated, the ones that are took place between 2016 and 2019 and appear to line up with different 'major' CLRG competitions. Such competitions typically require travel and overnight stays in hotels, where teachers and adjudicators often socialize.

CLRG issued a statement - first in an email to its members, and then on its website on October 4 after the media began to report on the story - that it is investigating the matter. CLRG has not responded to requests for comment from IrishCentral.

Here is a selection of the numerous messages included in the complaint that was lodged with CLRG in July and seen by IrishCentral this week:

In one exchange, a teacher sends his students' competitor numbers to an adjudicator and says where he hopes each dancer will land in the results.

“Thanks a million for anything you can do to help,” the teacher says.

In response, he receives a smiley face emoticon.

Elsewhere, the teacher inquires who will be judging one of his competitors in an upcoming competition. When he receives the panel, he replies: “Holy duck that is the panel from hell. F---,” adding, “I actually want to puke.”

Later, the teacher writes to the adjudicator: “Begging if you are on [competitor] to do what you can. Xx.”

In another exchange, a teacher says she “would really appreciate a hand with my good u18.”

She's told in response: “Absolutely. Not a problem."

The teacher replies: "Xxxx Thank you."

In a later message, the teacher writes that she has a dancer competing soon who had top results at previous competitions.

“Appreciate anything you can do,” she writes.

She receives a thumbs up emoticon in response. She sends back a kissing and winking emoticon.

The following day she writes: “Thankyou so much xxxxxx delighted.”

"Is there anyone you could talk to for me?"

In another exchange, a teacher writes: “So honey, looking for a bit of advise [sp] … I may need help tomorrow - is there anyone you could talk to for me?”

For one group, the teacher notes "Just do the best you can for them - no pressure x."

The adjudicator responds: "You got it. NP [no problem]."

"I hate to even push"

In another exchange, an adjudicator writes to a teacher saying: “[I] assume you want me to watch out for your kids [competitors] this week. He adds: “if there’s anything else, let me know.”

The teacher later writes to the adjudicator that he is “really looking for” the top score for one of his dancers.

“I hate to even push, but she is dancing fantastic,” the teacher says.

In another exchange, a teacher writes saying she doesn’t have her students’ competitor numbers, so she instead gives her dancers’ names, as well as a picture of each of her dancers - who are young children - in their full costumes.

She receives a smiley, winking emoticon in response.

In this exchange, a teacher makes an emotional appeal: “I really need your help and friendship tomorrow. I am really praying [competitor] will win. I need your help for this to happen, please. If you could please help me I would be eternally grateful.” The teacher then provides his student’s competitor number.

The two then try to work out how many points to award to each dancer to get the desired results - before the competition even begins.

Later, the teacher makes another emotional plea, saying he has had a “tough year” and he “truly needs a win.”

The adjudicator responds: “I am not promising anything until I see them dance, but I won’t pass [competitor] lightly. Tell [compeittor] to kick ass!”

The most shocking of the numerous exchanges in the file seen by IrishCentral is also the longest. While it is similar to the other exchanges in terms of favors being requested, it also has an explicitly sexual element. The messages between these two individuals occur over several years.

In this exchange, a judge writes: "I didn't wax for no reason," followed by laughing emojis and "Half an hours up."

The judge replies: "That was all done before I got here. Duh." He adds: "No visit no 100s" and two winking laughing emojis.

Later, when discussing "giving numbers," presumably competitors' numbers, the teacher remarks: "I was teaching 23 years when I heard this rack it [racket] was happening."

Elsewhere, the judge tells the teacher: "So you def[initely] want 100 for [one competitor] over [another competitor]. I don't mind doing that at all. As long as he stays on his feet."

The teacher gives the adjudicator his student's competitor's number. The adjudicator replies: "It's okay I know what he looks like. But I want to see what you look like again in my room" followed by a winking and tongue-sticking-out emoji.

Elsewhere, the teacher sends the competitor numbers of several of his dancers in several competitions. For one, he requests "First [place]." The teacher adds: "[Dancer] has won past two years. Important."

Elsewhere, the adjudicator writes: "If I am good to your [dancer] today do I get a reward?"

The adjudicator retorts: "Well the better you are to me the more you get" and a kissing emoji.