What do the Irish drink?

Pints of Guinness and Irish whiskeys aren't the only Irish favorites when it comes to popular Irish drinks. We take a look at some of the other weird and wonderful popular brews that get the Irish taste buds flowing. 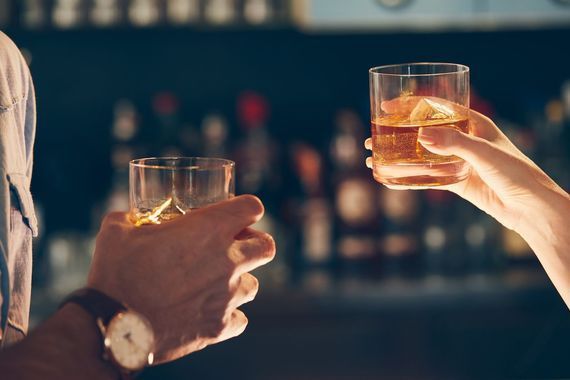 Pints of Guinness and Irish whiskeys are often regarded as the Irish drinks of choice, but there is an array of other popular beverages consumed and produced in Ireland that we think you'll love.

Often referred to as "the black stuff" by Irish revelers, Guinness is the world's most iconic beer and has been brewed at Dublin's St. James' Gate brewery since 1759. 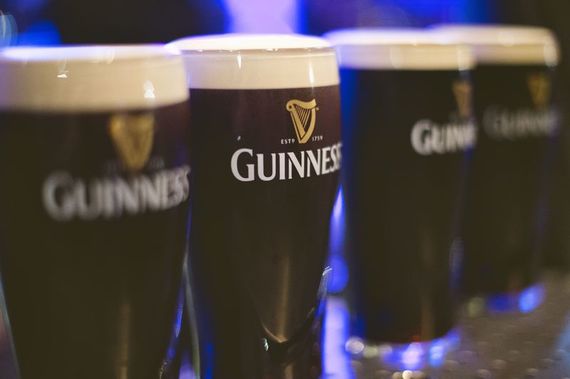 A portion of the barley is roasted to give Guinness its dark color and characteristic bittersweet taste. It is pasteurized and filtered.

Guinness is synonymous with Ireland and the company embraced the Irish harp as part of their logo since 1862. the Irish harp is actually Ireland's is official emblem and is also known as the Celtic harp or Gaelic harp.

However Guinness is not the only Irish stout Irish people pride themselves on and if you were to travel south to Cork you will become instantly aware of the “Rebel Counties” own dark brews, namely Murphys and Beamish.

Beamish was traditionally the Protestant stout while Murphy’s was a Catholic tipple.

The former being a more malty, stout core embellished with light touches of coffee, bitter chocolate, and a bit of spice.

Murphy’s drinkers opt instead for a drier stout, heavily roasted with dark grains, smokey barley, and some faint chocolate/roast.

The Irish coffee is a renowned favorite around the world as an after-dinner drink, a wake-you-up morning boost or just served as a wonderful warming treat!

Invented in 1942 by Limerick chef Joseph Sheridan to welcome visiting Americans to the west of Ireland on a cold winter night, Sheridan added whiskey to their coffee to warm them up, telling the Yanks they were being served Irish coffee!

Irish coffee is a cocktail consisting of Irish whiskey and at least one level teaspoon of sugar poured over black coffee and stirred in until fully dissolved.

Thick cream is carefully poured over the back of a spoon initially held just above the surface of the coffee and gradually raised a little until the entire layer is floated. The coffee is then drunk through the cream.

Whiskey, or "uisce beatha" in the Irish language, is an integral part of Ireland and Irish culture. It has shaped Ireland's agriculture, literature, song and now, more than ever - our economy.

"What whiskey will not cure, there is no cure for" - Irish proverb.

Irish whiskey almost became obsolete in the middle of the last century but is now the fastest growing type of whiskey in the world, and global sales of Irish whiskey have risen by more than 300% in the last 10 years.

Irish whiskey is the fastest-growing spirit in the United States, while whiskey exports in 2021 were worth a whopping €856 million, up 25% compared to 2020.

Baileys Irish Cream took the world by storm when introduced to the market in 1974.

Combining the Irish tradition of distilling whiskey with another great tradition of dairy farming, Baileys is an Irish whiskey and cream-based liqueur which contains a proprietary cocoa extract recipe giving Baileys its chocolate character and essence. 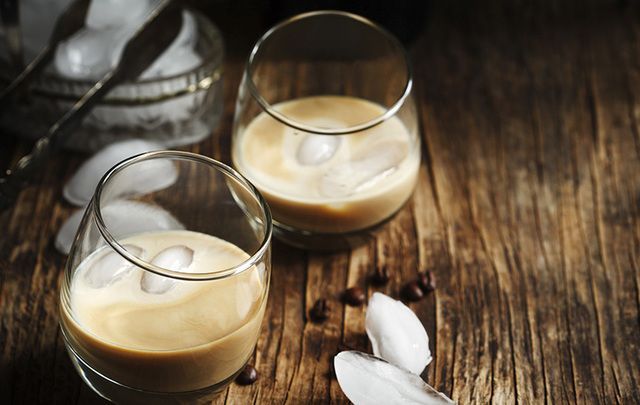 Baileys only uses cream from Irish cows in their product and the recipe also includes vanilla pods, caramel, and sugar.

Baileys Irish Cream is made by Diageo who also owns Guinness, Smirnoff (the world's bestselling vodka) and Johnnie Walker.

The Irish car bomb drink is a highly controversial Irish cocktail that draws its name from its "bomb shot" style but also the lethal car bombings throughout Northern Ireland's Troubles from 1969 as well as after the conflict.

It’s for this reason that many Irish people find the term offensive and some bartenders refuse to serve the drink.

The Irish car bomb is similar to a boilermaker, made by dropping a bomb shot of (Baileys) Irish cream and whiskey into a glass of stout (Guinness).

Once “dropped”, the drink is recommended to be consumed quickly as the cream will cause it to curdle within a short time.

What is an Irish mule drink?

The Irish Mule combines Irish whiskey, ginger ale and lime for a fun twist on the classic Russian cocktail, the Moscow Mule.

Fill a glass tumbler (or copper mug) with ice, then pour in 2 oz. of Irish whiskey. Juice half a lime (approx. 1 oz.) directly into the glass.

Fill the glass with ginger beer and stir to mix everything together.

Adding mint will help accentuate the ginger and lime.

Irish Apple Cider is an immensely popular drink with Irish people, especially on a warm summer’s day. The leading Irish cider brand has been Bulmer’s from Clonmel in Tipperary, where some 150 acres of glorious apple groves produce the apples that help make Magners the natural and refreshing beverage it is.

But outside of Ireland, Bulmer's Irish cider is sold under the “Magners” brand.

In recent years they have expanded their flavored ciders to include pear, berry and mixed fruit cider and because of ciders popularity, other brands have appeared in the market like Orchard Thieves and Appleman's made by Heineken and craft ciders like Stonewell cider.

Even world-renowned whiskey purveyors Jack Daniel's have delved into the Irish cider market introducing Tennessee Cider to their Irish customers.

The simple answer is "yes," and quite a lot of it too!

Wine is the second most popular alcoholic drink consumed by Irish people at 27 percent.

Of course, due to our wet climate, wine production isn't as prevalent as other drinks and we mostly consume wine imported from Chile, South America.

One in every four bottles of wine (25.6 percent) purchased in Ireland is from Chile; Australia comes next at 17 percent, France third at 12.9 percent and Spain at 12.3 percent, followed by Italy, the USA, and New Zealand.

The illicit substance known as poitín, or anglicized to "poteen," was a staple drink in the Irish countryside for many generations.

Ireland's own indigenous, authentic white spirit, also known as moonshine, was banned from 1661 to 1997 (although it remains illegal in Northern Ireland) because of its high potency - traditionally having an alcohol content of between 60 and 90 percent.

This lethal concoction is usually made from remnants of barley or potatoes with sugar, and yeast.

Legal poitín is much smoother and more palatable to drink at approx 40 – 45 percent alcohol content and Irish poitín producers are aiming to increase sales from 5,000 cases in 2018 to 80,000 over the next decade

Poitín was also produced amongst the growing Irish diaspora in the 19th century, particularly in Irish populated areas of  New York City.

What are Ireland's favorite alcoholic drinks?

A 2019 report by Drinks Industry Group of Ireland (DIGI) and Dublin City University (DCU) sheds light on the most popular alcoholic drinks for Irish consumers:

The Irish "cuppa" - an Irish cup of tea

The Irish are passionate tea drinkers and you could find an Irish person having a "cuppa" at any time of the day.

A cup of tea is usually the first welcoming offer made by Irish households to visitors and is often accompanied by a scone (in the morning) are some biscuits!

The Irish love affair with tea goes back many centuries, arriving in the early 1800s, it was classed as a luxury product - drunk by upper-class wealthy people.

Today Irish people consume more tea than every other country in the world bar Turkey with the average person in Ireland drinking four to six cups of tea daily.

Popular Irish brands include Barry's Tea in Cork and Lyon's Tea from Dublin, both over 100 years old.

Its why the hit TV comedy series "Father Ted," which

parodied three priests living on a remote island in Ireland included a tea obsessed house-maid as one of its main characters! "Ah go on, go on!"

Wake up and smell the coffee because Ireland is witnessing a coffee boom as independent coffee shops and roasters continue to open in great numbers.

Where once you would be "hard-pressed" to find anything related to a coffee shop, today streets and towns are bustling with cafes.

One in three Irish people now buys a coffee at least once a day reports the Irish Times, and the number of specialist coffee houses grew by 8.5 percent in 2016

Seventy percent of Irish people now drink more than one cup a day as the Irish embrace a new coffee culture as an alternative to Ireland’s pub culture.

What is an Irish moss drink?

Irish moss is a Jamaican soft drink in which the main ingredient is the marine red algae "gracilaria spp," or seaweed. It is one of several commonly referred to by the name of "Irish moss", purportedly introduced to the island's coast by Irish immigrant laborers.

Irish people are said to have consumed Irish moss during the Great Hunger of the 19th century in Ireland.

Irish moss is boiled in milk with sugar or honey and various spices added such as vanilla, cinnamon, and nutmeg.

It is believed “to put lead in your pencil," and boost energy that will lead to an increased libido.

Irish moss is high in calories and rich in protein, making it a favorite among athletes and bodybuilders and a reputed cure for digestive problems like ulcers and tonic for mood disorders.

What are your favorite Irish drinks? Are there any we left out?
Let us know in the comments below.