This was the first time that the renowned gates were painted any other color than blue or black. 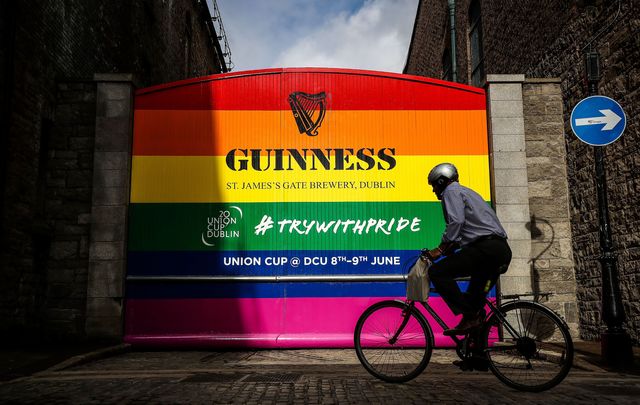 This was the first time that the renowned gates were painted any other color than blue or black. Guinness

The famous Guinness Gates was completely transformed for the first time in their history in a bid to support the upcoming Union Cup, Europe’s largest LGBT+ inclusive rugby tournament, which took place in Dublin earlier in June.

Earlier this month, the Guinness Gates on Rainsford Street was completely repainted and unveiled by representatives of Ireland’s Host Team, the Emerald Warriors, ahead of the Union Cup, Europe's largest LGBT+ inclusive rugby tournament.

Work on the gates took a full nine days to complete and aimed to promote the Union Cup, which took place from June 8 - 9 at DCU campus. They returned to their custom black on Monday, June 10.

This was the first time that the renowned gates were any other color than blue or black. In the early 20th century the gates would have been ‘Guinness blue’ – a bright blue – with gold lettering before they were changed to black with gold lettering in 1988. The gates feature in the famed Guinness Christmas advertisement.

The gates are passed by over two million people each year, so the Guinness brand wants to use their popularity and influence to showcase the Union Cup and encourage people to attend matches.

Before the tournament start, the Emerald Warriors RFC asked the Irish public to stand in support of diversity and inclusion in rugby by going to matches at the weekend. The 2019 competition also marked the first time that there was a dedicated women’s tournament and cup at the Union Cup in the form of the Ann Louise Gilligan Cup.

Read more: 10 reasons why you have to visit the Guinness US brewery

Richie Fagan, president of the Emerald Warriors and chair of the Union Cup, said that they were “honored to have a global brand such as Guinness stand in support of inclusive rugby.

“To see the iconic gates painted in celebration of 'Union Cup Dublin’ is epic. It is so important for us that our partners like Guinness make this tournament possible, and we’re incredibly proud to showcase how Ireland does it to our 45 visiting teams,” Fagan said ahead of the Union Cup.

“We invite Irish people, not just rugby fans, to do the same and come out to support and enjoy the Union Cup at DCU over the weekend.”

Rory Sheridan, head of partnerships at Diageo Europe, said that he hoped the transformation of the Guinness Gates would encourage people to support the June competition.

“We are proud to support Union Cup Dublin as it celebrates the power of rugby to unite people, and we hope Guinness Gates encourage people to support the teams playing in June. The team at Guinness have championed inclusivity and diversity in rugby, values that are integral to GUINNESS as a brand, through a number of rugby partnerships.”

The gates will remain painted in the rainbow colors until June 10, after which they will be repainted in their iconic black.

The Union Cup takes places over two days and will feature 45 teams from 15 countries. The tickets are available from www.unioncupdublin.ie and are priced at €10 for adult tickets.