Irish Car Bomb cocktail – Is it an insult to the Irish or harmless fun?

What would American’s reaction be if I invented a drink called “School Shooter” or “Boston Marathon Bomber.” 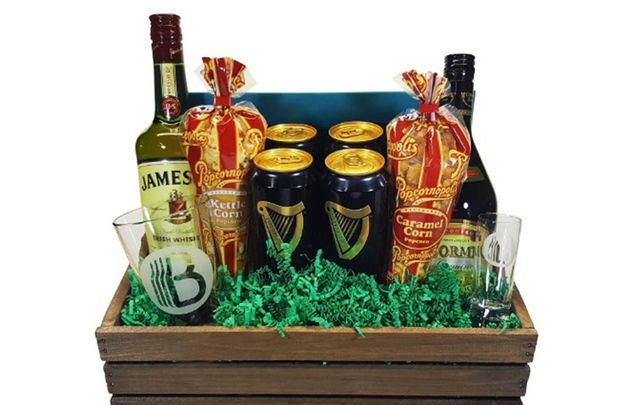 An Irish Car Bomb themed gift basket! If that was a joke it'd be in ill taste. BroBasket

I can’t quite get my head around the drink called the Irish Car Bomb, which comes center stage every year around this time.

Sure, I know it's very popular, but what would American’s reaction be if I invented a drink called “School Shooter” or “Boston Marathon Bomber.”

Not too kindly I’d say and quite right. Not everything can be trivialized and slapped up on a counter.

We Irish are accused of being too sensitive, but not every jibe washes off. Car bombs are bad business and deeply traumatizing to survivors and families who have lost someone.

Yet, I believe the car bomb – a mixture of Guinness, Jameson and Baileys – is more popular than ever... (incidentally showing that ruining a perfectly good pint of Guinness by dropping a shot and a Baileys in it is acceptable to many.)

The makings of an Irish Car Bomb.

It came back up for me when BroBasket, a gift company out of Camarillo, California, offered an Irish Car Bomb case with a special title “The Irish I was drunk” package as the main attraction.

Enough, says I. That’s silly and insulting, making the Irish out to be right morons.

An IRA victim’s group, FAIR (Families Acting for Innocent Relatives), has criticized the selling of the cocktail for several years, claiming the suffering of car bomb attack victims, who have been maimed or killed, should not be celebrated in such a way. They have a point.

Willie Frazer, a spokesman for the group, said: “It is disgusting that IRA car bombs which killed and maimed so many in Northern Ireland are being trivialized or celebrated in this way.

Diageo, which owns two of the ingredients for an Irish Car Bomb, certainly agrees.

“We are proud of the role our brands play in celebrating occasions such as St Patrick’s Day,” said Emily Hallie, a Diageo spokeswoman, in a prepared statement. “We have a stringent marketing code which ensures that we promote only the responsible consumption of our brands. As such we do not seek to support drinks such as the Irish Car Bomb.”

The inventor of the tasty concoction, a bar owner named Charles Oat in Connecticut, has even apologized for his insensitive christening and wishes he could take it back.

"Of course, today I would take that name back. Of course – there's no question about it," Oat said It was a brave admission.

However, such criticism hasn't stopped its popularity. Former IrishCentral editor Megan Finnegan saw no real harm in the name. She wrote:

“There are a whole host of explicit drink names that denigrate women, most of which I can’t even write for this website. (The least offensive on the list is a Redheaded Slut.) And is an Irish Car Bomb really worse than a Runny Duck Fart? If you’re got a sensitive issue, chances are that there’s some idiotic cocktail name that will upset you.”

That may be true, but I don’t see such drinks having anything like the prominence that the Irish Car Bomb has.

She says the real equivalent of the Irish Car Bomb is the Kamikaze shot (vodka, triple sec and lime juice), named after the Japanese pilots who used their planes as bombs in the during WWII. Approximately 2,400 people died on December 7, 1941. To put that into perspective, 2,996 people died on September 11, 2001 and the IRA killed about 1,800 people during its active period spanning four decades. “So why don’t we have World War II vets protesting young whippersnappers with fake IDs doing Kamikaze shots?”, she asks.

Yes, but again it’s not called the Pearl Harbor victory shot, (though there were no kamikaze incidents in that surprise attack) so it is a deflected blow and many may see it in a different context and not make the connection. There is only one way to see the Irish Car Bomb.

Last year the Guardian quoted a bartender in New York as saying, "Americans ordering Irish Car Bombs is downright offensive. I might as well walk into a sports bar and order a School Shooting."

Me? I'm old enough to remember the Dublin/Monaghan bombings of May 17, 1974 when Loyalist killers, set up with weapons and bomb-making equipment by British secret forces, murdered 33 innocent bystanders (including a pregnant woman) and injured 300 using car bombs. The mass murderer Robin Jackson, AKA “the Jackal,” played the lead role.

Robin Jackson AKA The Jackal, carried out the most devastating car bombing of The Troubles.

Anything that reminds me of that atrocity does not ring my bell. I remember my distraught parents desperately trying to reach three of their children who were in Dublin that awful night.

No, the Irish Car Bomb fizzles for me. It might be time to replace the name with something else. How about “The Quiet Mad Man?”

Read more: Is the war being won or lost? Crude St. Patrick’s Day t-shirts of 2017