Brit-bashing - from the Northern Ireland Protocol to Meghan Markle

The Brit-bashing both in Ireland and abroad is a mistake, writes John Spain. 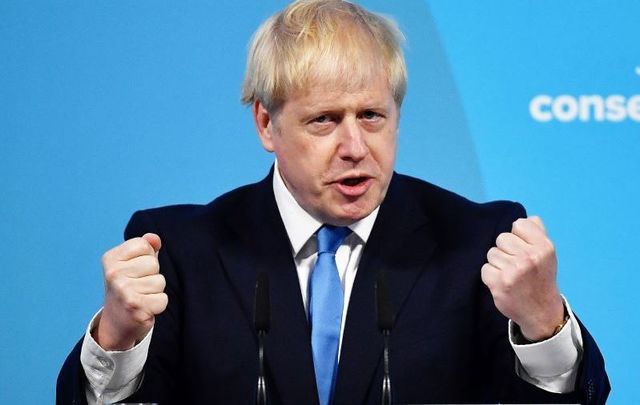 There is a lot of Brit-bashing going around at the moment prompted by the difficulties posed by the Northern Ireland Protocol in the Brexit final deal. It's happening in political circles both here and in Irish America, and it's a mistake.

But before we get into the detail of that, let's consider for a moment the attitude of most people in Ireland to our nearest neighbor.

At this stage in our history, most of us are prepared to let bygones be bygones. Some of us remember that in the decades after independence, the Brits were actually quite generous to us when we needed to get away from de Valera's stultifying, depressed Ireland. We had the free travel area with the U.K. and the right to work there, and hundreds of thousands of us escaped to make new lives and rear families in London, Birmingham, Manchester, and more places. And that unique freedom for us was maintained even when those cities were being blown apart by the IRA during The Troubles.

In spite of our difficult past, most of us have moved on. You will remember the warm welcome the Queen received here 10 years ago. And that she shook hands with Martin McGuinness, despite the bombing campaign in Britain and the Mountbatten murder which was deeply painful for her.  She was willing to move on from the past as well. 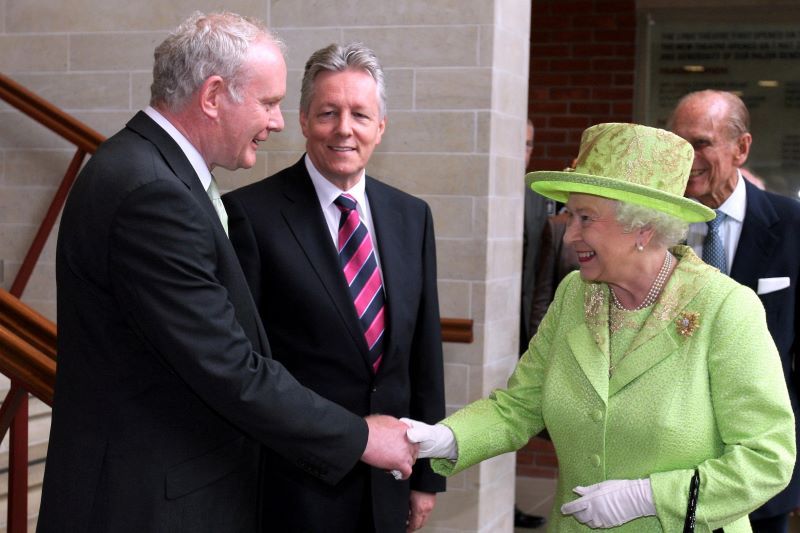 It's not that people here don't value our Republic. But our attitude to the Brits has softened over the years and the interest in the royals is part of that.

The Crown on Netflix had record viewing figures here. The Meghan and Harry interview with Oprah Winfrey last week had 725,000 viewers, making it the most-watched program on RTÉ so far this year (with another 100,000 streams online). To give you an idea of the scale of this, the All-Ireland football final last year had 876,000 viewers.

We will come back to Meghan's sob-athon with Oprah which was met with skepticism here. But first, let's turn to the protocol and the misplaced Brit-bashing it has generated.

As we explained here a few weeks ago, the Protocol is part of the Brexit Withdrawal Agreement and is designed to protect peace in Ireland by avoiding a land border here. Since Northern Ireland is now out of the EU and the south of Ireland is still in, there has to be a border to protect the EU Single Market and Customs Union.

The general consensus was that having a land border in Ireland could not be risked because it might restart the violence. The alternative eventually arrived at was the Protocol.

Under this arrangement, Northern Ireland continues to apply Customs Union and Single Market rules in the North even though it has left the EU along with the rest of the U.K. This has meant there is no need for a land border in Ireland. But it means there has to be a border in the Irish Sea to check on goods coming into the North from the rest of the U.K. where EU rules and standards no longer apply.

When the Brexit deal was done in 2019, the Protocol did not bother people in the North too much. Trade continued as normal in the year that followed during the transition period but that ended at the start of this year and the Protocol began to take effect.

From that point on, there were problems at the ports in the North as trucks bringing goods in from the U.K. were subject to checks and expected to have reams of paperwork, leading to delays and missing items in supermarkets. From the unionist point of view, this was unacceptable.

Why should goods being moved from one part of the U.K. to another have to satisfy EU checks? The way the unionists saw it, this was interfering with the internal U.K. market. Even worse, it was separating the North from the rest of the U.K.

And for once, the unionists had a valid point. Despite their reputation for intransigence, any fair consideration of the Protocol will come to the same conclusion. The Protocol does weaken the North's position within the U.K.

Yet in the last few weeks, the Irish government and leaders in Irish America have been ignoring this. The argument has been that British Prime Minister Boris Johnson signed the renegotiated Withdrawal Agreement (which included the Protocol) so that he could get his Brexit over the line at last. He signed up for it and so he, and the unionists, have to live with it.

But it's not that simple, particularly now that unionists have woken up to the reality of the Protocol. They are refusing to accept it, no matter what Johnson signed.

This may well get worse in the weeks and months ahead. Since the start of this year, the checks and delays at the ports in the North have been annoying but manageable because the Protocol was being introduced gradually.

Full implementation was due to start on April 1. But that has now been postponed because Johnson has unilaterally decided to put it off for a further six months.

This provoked outrage here, in the EU and the U.S., with accusations that Johnson is walking away from an international legal agreement he signed and that he can no longer be trusted.

Which is one way of looking at it. Another way is that Johnson never intended to fully implement the Protocol and wants it to be watered down so that trade between mainland Britain and the North can be done seamlessly as it was before.

In response to this, the EU is preparing legal action against the U.K. And there is a lot of huffing and puffing from the Irish government and Irish America, with a few threats thrown in as well.

The most striking thing about this reaction is the absolute refusal to acknowledge that there is a genuine problem. Simply repeating that Johnson signed up to the Protocol and that he has to make it work will not get us anywhere.

The reason everyone is so hyped, of course, is that if there is no border in the Irish Sea then there will have to be a land border in Ireland if we want to stay in the EU. The EU is too diplomatic to say so bluntly at this stage, but that is what is coming if this situation persists beyond Johnson’s six-month postponement.

Such a move could weaken the Good Friday Agreement and undermine peace in Ireland, it is claimed. That has caused understandable concern both here and in the U.S. But who would be to blame is another matter, despite everyone pointing the finger at the U.K.

The fact is that Johnson has repeatedly said he will not construct a land border in Ireland. And on this, at least, he can be trusted because he has no interest in doing so.

If the U.K. is awash with global goods after Brexit, Johnson won't care if some of this leaks into the Republic and onwards into the rest of the EU.  But the EU will care and it will be they who will insist that there has to be a border in Ireland to protect the Single Market.

This is something that senior figures in Irish America need to remember. The proposed resolution in the U.S. Senate this week in support of the Belfast Agreement is laudable, but is it aimed at the right target? Similarly, the threats being made that a future U.S.-U.K. trade deal will not happen if the U.K. persists in postponing the implementation of the Protocol.

Threats are not going to solve this problem, whether they come from President Biden, Congressman Richie Neal, or anyone else. What will solve the problem is recognizing that this is a fundamental issue for unionists and minimizing the Protocol to a sensible level to meet their concerns.

It is far from sensible at the moment with the EU insisting on a ridiculous level of control. Since the start of this year, around 20 percent of all the border checks in the EU have been at Northern Ireland ports even though the North has less than half of one percent of the EU population.

The full regime of EU checks and controls is being applied even though the goods in question have not changed since before Brexit. It's the same supermarket items that have always come from the U.K. to the North, except that now they need mountains of paperwork and permissions to get them through the inspections. This applies especially to food items that now need complicated health certificates.

And it's not just food items. Seed potatoes from Scotland and garden plants from England are other examples of imports which have been stopped, as well as various items needed for businesses in the North which have been delayed or turned back. Unless changes are made, this will soon apply to all medicines coming into the North, which would be a major problem.

Rather than deal with this in a reasonable way, the EU is being completely inflexible. It wants to protect the Single Market and that is understandable.

But it's dealing with the U.K., not some third-world country where low standards apply. It looks very much like it is using the situation as a way of punishing the U.K. for having left the EU.  And caught in the crossfire is the North.

Of course, important though all this is, no one here was talking about the Protocol last week. Instead, they were talking about the Harry and Meghan whinge fest with Oprah. Most people here were unimpressed, not least on the two contentious claims they made, of racism in the royal family and failure to help Meghan with her mental health issues. 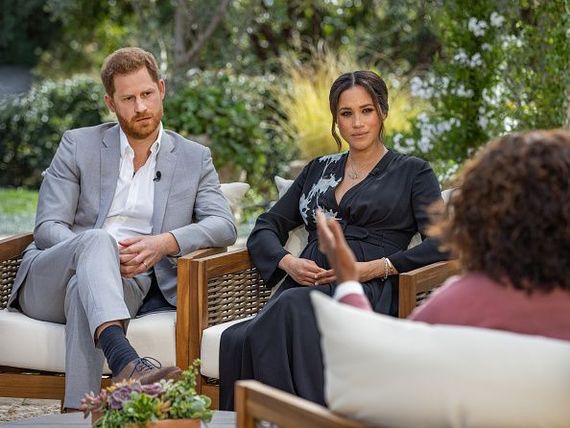 The Harry and Meghan interview with Oprah Winfrey. (Getty Images)

On the racism one, the general view was that Meghan's dad was right -- he said that wondering about what the baby's skin tone might be was probably "just a dumb question" one of the royals asked. It does not mean the royal family is racist.

On the mental health issue, Harry has been a patron of one of the main mental health organizations in the U.K. and has had counseling and therapy himself at various times. The idea that he could not have organized discreet help for Meghan if she needed it is absurd.

Overall the impression of Meghan was of someone playing it for all the sympathy she could get, regardless of the damage she might be doing. An Oscar-winning performance by a B-list actress.