The British monarchy meeting with Irish Republican leaders was no easy step for either side. 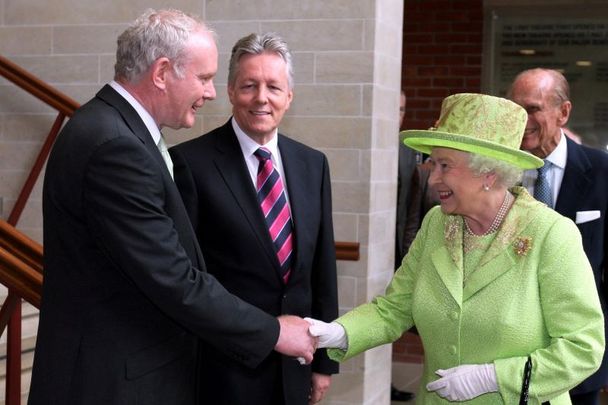 Those who say the royal family performs no useful function other than as tourist magnets overlook their role in helping secure the Irish peace process.

That role was praised by even Gerry Adams and the late Martin McGuinness after they met the royals.

And who can forget the Queen, who opened her address in Irish, remarking during her Irish State visit in May 2011: “What were once only hopes for the future have now come to pass.

"It is almost exactly 13 years since the overwhelming majority of people in Ireland and Northern Ireland voted in favor of the agreement signed on Good Friday 1998, paving the way for Northern Ireland to become the exciting and inspirational place that it is today.”

Later, the Queen met and shook hands with Martin McGuiness in 2012 at a critical time in the post-peace process era. McGuinness and the queen shared a warm handshake and a few words.

The effect was seismic. Gerry Adams, then the President of Sinn Féin, remarked: "It brings our journey of relationship building within this island and between these islands onto a new plane."

He added: "I think the vast majority of unionists will be pleased this happened because they know it was essentially a real gesture towards their sense of identity and their sense of allegiance."

McGuinness told BBC Radio 4 that he shook hands with the Queen "to extend a hand of friendship, peace and reconciliation" to unionists in the region.

When he was questioned why he was calling her the Queen and no longer Mrs. Windsor, he explained that "when people are gracious and step up to the plate, we have to reciprocate."

Adams himself had his peace process moment with the royal family when he met Prince Charles at the British ambassador’s home in Dublin in 2015.

It was not an easy meeting for either man. Charles had lost his beloved uncle, Lord Louis Mountbatten, to an IRA bomb, while Adams was receiving tough criticism from hardliners that he had gone soft on the British.

Though it was a fleeting moment, the two chatted amicably.

Republican leaders meeting British monarchy, the very embodiment of the imperial system they fought, was no easy step.

But neither was it easy for the royals. Credit where credit is due and Queen Elizabeth's speech in Dublin especially was a defining and brave moment.