Generations of Irish in America will remember Martin McGuinness 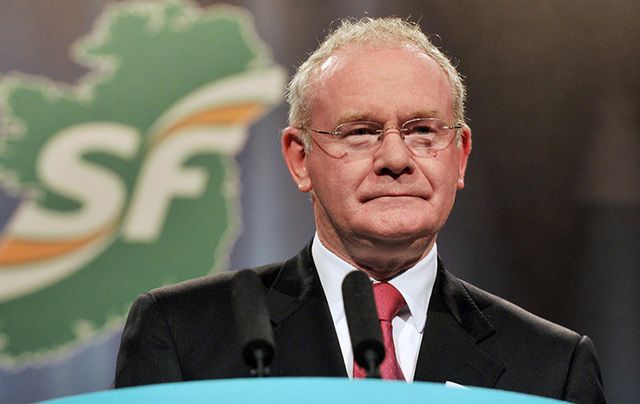 Almost 1,000 Irish Americans attended St. Patrick’s Cathedral in New York on Monday for a month’s mind Mass for Martin McGuinness, the Sinn Fein leader who passed away in March.

McGuinness, Sinn Fein’s chief negotiator in the peace process, was an enormously popular figure in Irish America as he was in his native Derry where 25,000 people, including former President Bill Clinton, showed up for his funeral.

The eulogy on Monday was delivered by Senator George Mitchell, who spoke powerfully of the McGuinness role in the peace process which he said would never have happened without his work.

Mitchell, who chaired the all party peace talks, remembered one incident early in the morning at about 4 a.m. on the Holy Thursday before Easter in 1998 when the talks were close to either breakdown or success and it was an all night negotiation session.

He was walking upstairs with British Prime Minister Tony Blair when Gerry Adams and McGuinness rushed down to meet them. There and then, he stated, vital aspects of the agreement were discussed and sorted out. McGuinness never stopped his work for a peaceful resolution, Mitchell said.

Mitchell said he visited McGuinness in hospital in Derry during his final illness and found him very lucid and calm and still as focused on extending the peace as he was on his own condition.

Mitchell received a standing ovation for his remarks, and deservedly so.  Simply put, the peace process wouldn’t have happened without determined leaders like Mitchell and McGuinness leading the way.

The massive cathedral was full of ordinary Irish Americans who came to pay tribute to a fallen Irish chieftain who made many trips to the U.S.  Speaking on the steps of St. Patrick’s, Sinn Fein Vice President Mary Lou McDonald paid tribute to McGuinness as a man who left an incredible mark on Irish history. He was a committed Republican but he knew how to work with others she said, pointing to his ten years working with three different DUP leaders at Stormont.

His legacy would be the success of the peace process, McDonald said. She praised Irish America for its stalwart support of Sinn Fein through thick and thin. “Our friends in America have made a huge difference,” she said “but we must not sit back, there is much to be done.”

The Mass was celebrated by Monsignor Robert Ritchie, rector of St. Patrick's Cathedral who stated the month’s mind tradition was one that, unfortunately, had died out in the United States but was thankfully still alive in Ireland.

An Irish and American flag were carried up to the altar as the Mass started and carried outside at the end. Bagpipers also played an Irish lament, drawing a huge crowd of Fifth Avenue shoppers, enthralled by the spectacle.

Martin McGuiness will never be forgotten by those who knew him and those who followed his life journey from IRA commander to peacemaker. As was said at the time, McGuinness never went to war -- war came to him. How he helped end that conflict will define his extraordinary legacy for generations of Irish here in America.

Congratulations to all of the organizers who planned Monday’s Mass so perfectly.  Irish Americans will never forget McGuinness.