"To honor him we must finish his work," Bill Clinton at the Martin McGuinness funeral

“If you seek Martin McGuinness’s monument, his legacy – look around you.” Sinn Fein leader honored in his hometown Derry. 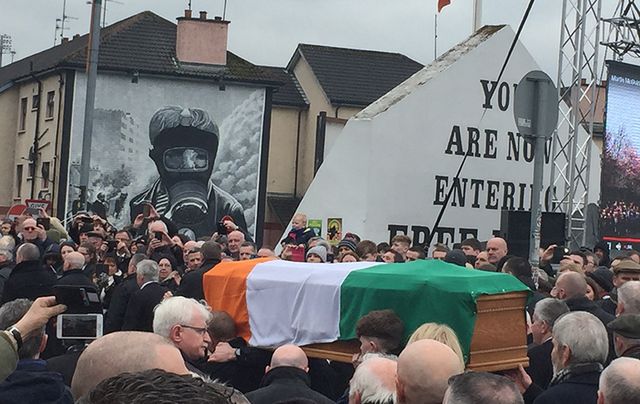 Massive crowds, including former president Bill Clinton, gathered for the funeral of Sinn Fein leader Martin McGuinness in Derry today. The former IRA_commander-turned-Sinn-Fein-leader-and-Stormont-deputy-first-minister was honored in his native Derry as thousands lined the streets of the Bogside.

In his remarks, Clinton paid fulsome tribute to the former First Deputy Minister. "To honor him we must finish his work," he stated to a packed church as thousands gathered outside.

He said McGuinness's own eulogy for himself would have been: "I fought, I made peace, I made politics, I had a fabulous family."

He quoted Nobel Laureate Seamus Heaney, also a Derry native, who wrote about people "walking on air" against their better judgment to achieve remarkable things. Martin McGuinness was such a man, he said.

McGuinness (66) passed away on Monday morning, surrounded by his family. He had been diagnosed with a rare heart condition in December 2016.

Members of the public carried banners to honor the veteran Sinn Fein leader. One read “Martin McGuinness. Irish martyr. He did not go to war. War came to him. Blessed be the peace-maker.” 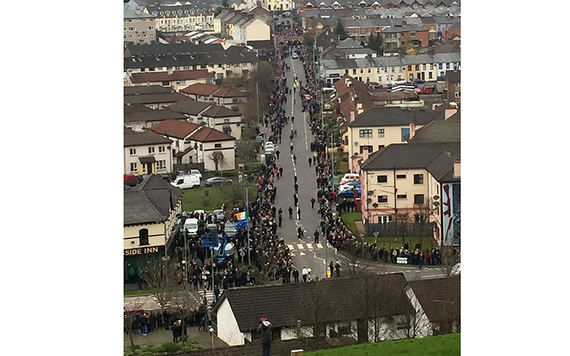 Thousands line the streets of Derry to pay their respects to McGuinness.

A piper played as his coffin was carried onto the street where a tricolor flag was placed on top by members of Sinn Fein. The Daily Mail reported that the crowd broke into applause as family members slowly carried the coffin along the street.

Inside, at the Requiem Mass, Father Michael Canny gave the following homily:

If any of you have ever visited Saint Paul’s Cathedral in London, you may have seen the plaque on the wall of the crypt where the man who designed the church – the celebrated architect Sir Christopher Wren – is buried.  There is an inscription on it, in Latin, which is usually translated as: “Reader, if you seek his monument – look around you.”

Well, if you seek Martin McGuinness’s monument, his legacy – look around you. Look not at the beauty of this Saint Columba’s Church, which was such an integral and important part of Martin’s life.  Look, instead, at the people gathered in this church, to say farewell to a man who was such a proud member of this community, the person who came to be a widely-respected leader of this community, someone who has been acknowledged in recent days as a politician who spent year after year moving this community towards peace.

There are people in this church today whose presence would have been unthinkable only a generation ago.  They have forged working relationships with Martin McGuinness; they have built friendships with him; they have occupied Stormont’s benches alongside him.  Some have even sat in government with him.  You are all very, very welcome.  The presence of those political rivals and opponents among you, who have come to pay their respects this afternoon, is the most eloquent testimony to the memory of Martin McGuinness.  When you seek his monument, YOU – by your presence – are his monument. 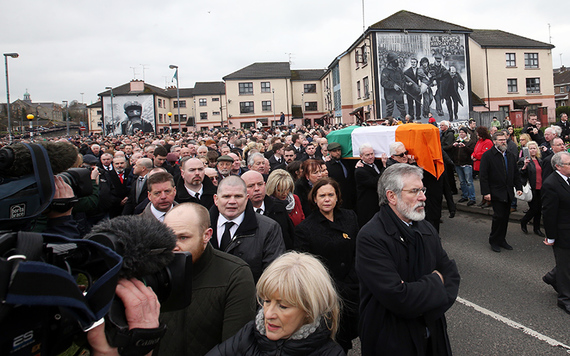 Gerry Adams and Mary Lou McDonald among thousands of mourners at the funeral of Martin McGuinness.

Over recent days, many column inches have been written and myriads spoken about him.  His life and death have been retold in innumerable television and radio interviews.  Many of us have our own particular stories of our relationship or friendship with him.

Martin was a complex man.  He was born into a community where faith, Catholicism and Nationalism were intertwined.  He was a man of simple tastes who ascended to the political summit.  He visited the White House, Downing Street and Windsor Castle, but only ever felt at home in his beloved Bogside, returning to his wife and family at every opportunity.  He shook hands with presidents, prime ministers, Taoisigh and even royalty, but was most comfortable walking with Bernie along the back shore at Buncrana, or wandering at Inch Island or up at Grianan, or along a river bank fishing.  He ate many formal dinners but was happiest when eating cabbage and bacon, or a piece of salmon caught by his friend James Quinn.  Martin the Sinn Féin leader who first shared power, then became friends, with the late Dr Ian Paisley; Martin was the IRA commander who became a mainstay of the peace process.

In his last recorded interview on RTÉ, part of which was broadcast on Tuesday morning, Martin was asked about the judgement of history.  He wasn’t worried about what historians thought, he told Tommie Gorman; he said he would leave it to the judgement of people.  He asked only that he be judged fairly.

I have had many conversations with Martin down through the years and he knew only too well how many people struggled with his IRA past.  Republicans were not blameless, and many people right across the community find it difficult to forgive and impossible to forget.

During this past month, Lord Trimble wrote to Martin telling him that he had been indispensable in bringing about devolution after the signing of the Good Friday Agreement.  Former First Minister Arlene Foster said on Tuesday that Martin’s contribution to the political and peace process had been “significant” and had “helped build the relative peace we now enjoy”, and yesterday in the assembly chamber said “I doubt that we will ever see his like again”.  In January, as the seriousness of Martin’s illness was becoming more and more obvious, Ian Paisley Jnr. thanked him, saying his “remarkable journey” had “not only saved lives but made the lives of countless people better”.

The word ‘journey’ has been used by many people in recent days to describe Martin’s transition from man of war to man of peace.  The word journey is also used frequently to describe the believer as he or she lives life on the way to union with God.

In our Gospel we heard of the disciples’ journey that began in darkness after the death of Jesus – having witnessed his crucifixion – but turned to hope when they discovered that he was not dead but alive.

The first reading tells us that on that journey there is a time for different things;

On that journey many years ago, Martin realized that the time for peace had come and he pursued the peace process with relentless energy for the rest of his days, until illness finally struck him down.  In the course of that journey he encountered many obstacles but he remained resolute.  In conversation he often repeated that there was no other way, we had to continually work for the building of peace and a better future for all.  Despite many setbacks he never became disheartened.

We come here to this church this afternoon because Martin was also a man of faith.  He believed in God and his faith was important to him.  Prayer was very important to him.  In Saint’s Paul’s second letter to Timothy, read in our second reading, the apostle said the time of his departure had come and he prepared to face the Lord, “the righteous judge”.  He had finished the race.  He had kept the faith.

Martin, too, has finished the race.  He, too, kept the faith.  He, too, has come face to face with the righteous judge who judges all fairly.

In a short time we will lay Martin to rest and we will all go our different ways to continue with the bits and pieces of life but Bernie, for you and the family, life has been changed.  Yes, it will continue, but it will be very different – no more waiting for the car to come across the street with the knowing that he was home safe.  A big figure has been taken from your life and the life of your family, but be assured of our prayers and continuing support over the many difficult and challenging days ahead.

So, we commend Martin to the Lord as we say: “Eternal Rest grant unto him O Lord and let perpetual light shine on him.  May his soul and the souls of all the faithful departed rest in peace.  Amen”