Queen will be among those who pay tribute to Martin McGuinness

The former IRA leader turned peacemaker died after a short illness at the age of 66. 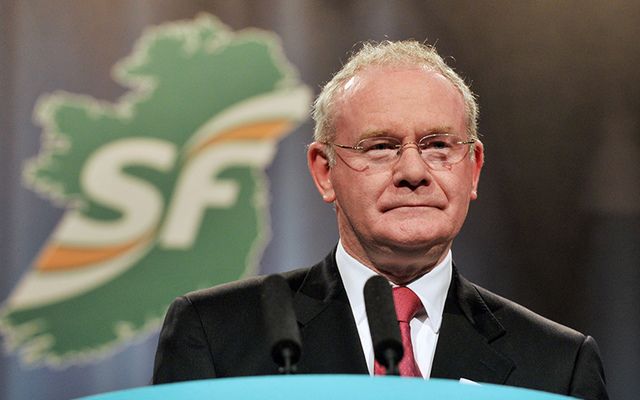 The former IRA leader turned peacemaker died after a short illness at the age of 66. RollingNews.ie

A giant of Irish politics, a peacemaker, and a coward. The plaudits came in thick and thin - mixed with fierce condemnation - for the Derryman who lead Sinn Féin out of the shadow of the IRA into a power-sharing government with unionists.

For much of his career McGuinness was a hate figure for unionist Ireland: imprisoned for IRA membership in 1974 few would have predicted then that his passing would be publically acknowledged by the reigning British Monarch - let alone that Her Majesty would send a private message of condolence to the McGuinness family.

Martin McGuinnes came of age in the Derry of unionist gerrymandering and Bloody Sunday. The Queen’s uncle, Lord Mountbatten and his grandson, were killed by an IRA bomb off the Sligo coast in 1979. But that didn’t stop the pair sharing a handshake, smiles and a joke when they met on her visit to Northern Ireland two years ago. In the words of Yeats, it was “All changed, changed utterly.”

Former First Minister Arlene Foster, whose job he imperiled when he collapsed the power-sharing Executive in January, released a statement offering her “sincere condolences” to his widow and children. As a teenager, Foster had been on her way to school when the organization - on whose Army Council many suspected McGuinness of sitting on - bombed the bus she and her school friends were on. Reflecting the wariness many of in party felt towards the former soldier she noted, “History will record differing views and opinions on the role Martin McGuinness played in the recent and not so recent past but history will also show his contribution to the political and peace process was significant… [he] was pivotal in bringing the republican movement towards a position of using peaceful and democratic means.”

Reflecting the wariness many of in party felt towards the former soldier she noted, “History will record differing views and opinions on the role Martin McGuinness played in the recent and not so recent past but history will also show his contribution to the political and peace process was significant… [he] was pivotal in bringing the republican movement towards a position of using peaceful and democratic means.”

Former First Minister David Trimble was more magnanimous. “You were indispensable”, Lord Trimble wrote to him last week on his deathbed, “you reached out [during the peace process] to the Unionist community in a way some of them were reluctant to reach out to you.”

"It's not how you start your life, it's how you finish your life", said the son of the man McGuinness served with most famously as Deputy First Minister. Kyle Paisley said that he “looked back with pleasure” on the year that his father Ian served with McGuinness in the Northern Ireland Executive. Paisley, derided for so long as the “Dr. No” of hardline Ulster unionism was soon caricatured as a “Chuckle Brother” - a reference to a comedic British children’s program - after him and McGuinness got on together famously.

From the man to whom history will link him to like an umbilical cord, Gerry Adams, no eulogy was ever going too fulsome. “He was a passionate republican who worked tirelessly for peace and reconciliation and for the reunification of his country. But above all, he loved his family and the people of Derry and he was immensely proud of both,” he told the media.

And for those who questioned his role in the Troubles, Adams had no doubt what verdict history should record. "Martin McGuinness never went to war. The war came to him. It came to his street, to his city, to his community," he said.

McGuinness’s replacement as leader of Sinn Féin in Northern Ireland tweeted that her heart was “broke” from hearing the news of his passing.

My heart is broke this morning. We have lost a legend, a giant of a man. I'm very proud to say he was my friend and mentor x

Ireland’s Taoiseach (Prime Minister) Enda Kenny has frequently clashed with opposition Sinn Féin legislators about their role and the legacy of the Troubles. But today was never going to be a day for partisan point scoring and, whilst hinting at a darker past, his statement paid hearty tribute to the politician McGuinness became.

“Martin,” he said, “will always be remembered for the remarkable political journey that he undertook in his lifetime. Not only did Martin come to believe that peace must prevail, he committed himself to working tirelessly to that end.”

President of Ireland Michael D Higgins, against whom McGuinness ran as a candidate in the 2011 election, spoke of the “great sadness” upon hearing his passing. “The world of politics and the people across this island will miss the leadership he gave, shown most clearly during the difficult times of the peace process, and his commitment to the values of genuine democracy that he demonstrated in the development of the institutions in Northern Ireland… His death leaves a gap that will be difficult to fill. May he rest in peace.”

Echoing Arlene Foster, Britain’s Prime Minister Theresa May noted, “While I can never condone the path he took in the earlier part of his life, Martin McGuinness ultimately played a defining role in leading the Republican movement away from violence.  In doing so, he made an essential and historic contribution to the extraordinary journey of Northern Ireland from conflict to peace.”

Her predecessor Tony Blair, who helped broker the Good Friday Agreement, said that “without him being fully on side with [the peace process] it would never have happened.”

His former chief of staff Jonathan Powell recalled that their first meeting with the Sinn Féin leadership had been held in a windowless room so no pictures could be taken of the British Prime Minister shaking hands with terrorists. Powell refused to shake their hands at that first meeting, not feeling “warm and cuddly” about them. The IRA had shot his father and put his brother on a death list but the tension was broken when McGuiness remarked of Downing Street,“So this was where the damage was done” in reference to the Anglo-Irish Treaty that had partitioned Ireland in 1921. Powell replied, “By damage, I thought you meant when you guys lobbed the motor through the windows of Downing Street in [Prime Minister] John Major’s time.” The ice had been broken and Powell would go on to invite Adams and McGuinness to his wedding.

From America, Bill Clinton wrote, “Hillary and I were saddened to learn of the death of Martin McGuinness, who devoted his life to his beloved Northern Ireland. When he decided to fight for peace, Martin was calm, courageous, and direct. And when he gave his word, that was as good as gold.”

Members of Sinn Féin emerge from Leinster House to make a statement about the death of Martin McGuinness.

But not everyone was so keen to praise the late Derryman. Jim Allister who represents North Antrim in the Northern Ireland Assembly for the Traditional Unionist Voice party said, “First and foremost I think of the many victims that he has responsibility for as director of the terrorism of the IRA. Of the people who never got to the age of 66. McGuinness lived many decades longer than his victims who never got to see their grandchildren. Why? Because Martin McGuinness decided they should die in pursuit of a terrorist campaign that filled our graveyards with innocent victims.”

When asked about McGuinness’s later career post-Good Friday Agreement, Alistair remained unforgiving. “He should never have been a terrorist in the first place. No one made him be a terrorist. He chose to be a terrorist… Never once did he show remorse.”

Norman Tebbit, who served as a minister in Margaret Thatcher’s Government and was once tipped to replace her, said that he hoped McGuinness was "parked in a particularly hot and unpleasant corner of hell". His wife Margaret was left paralyzed after an IRA bomb meant for Thatcher went off at the hotel she was staying in - killing five. It was the most audacious attack on any British Government in nearly four hundred years and served to harden the resolve in the Conservative Party towards Irish republicanism.

"He was not only a multi-murderer, he was a coward," Lord Tebbit continued. “He knew that the IRA were defeated because British intelligence had penetrated right the way up to the Army Council and that the end was coming.”

But Jo Berry whose father, Sir Anthony, was a serving member of the British Parliament and died in the attack was more generous, “He showed us how to move forward and showed us a way where former enemies can work together for the peace of the whole," she said.

On social media, the tributes were mixed with fierce condemnation.

Some came to praise him.

Colin Parry whose son, Tim, was killed by the IRA. 'We can never forgive him but we can respect the man he became' #McGuinness

Martin McGuinness was and always will be a National hero. I'm grateful to him for everything he sacrificed to make our lives easier 🇮🇪

Whilst others fiercely condemned him.

ITV Drawing a parallel between #McGuinness & Mandela Utterly disrespectful to the many children murdered by IRA.

McGuinness was a monster. Death does not redeem him. Nor return the little lives his terrorist bombs took away. #McGuinness pic.twitter.com/ow8noaoFpG

Such anger, it would be fair to say, was not shared by the hundreds who braved snow and sleet to witnessed McGuinness’s final journey home to Derry this afternoon. Carried aloft on the shoulders of the leaders of the north’s republican leadership - both old guard and new - his tricolour-draped coffin now awaits burial in a funeral home in his native City.