Until just after midnight on March 20, he was our North Star, writes Máirtín Ó Muilleoir. 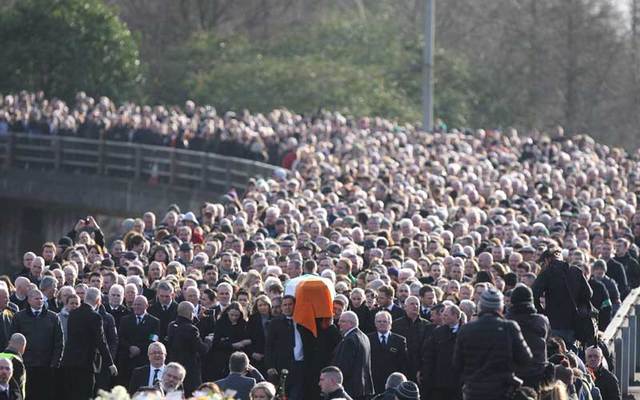 Séamus Ó Domhnaill, the 19th-century Donegal poet lamenting his drowned son, comes closest to capturing our devastation at the news that Martin McGuinness is gone.

[On the First Tuesday of autumn, sorry and tired was my news.
A fast hand which was brave going before me to the bed of the dead.]

Singer Christy Moore paying tribute at the funeral of McGuinness.

For in him, we had a hero and a champion who stood always by our side. While the commentariat assesses his life’s journey in parts, we see only the whole of the moon. The Martin McGuinness who faced down the powerful on the streets of his native Derry was also the Martin McGuinness we revered as a fearless peacemaker.

His was a life spent in selfless service. A life of patriotic and enduring endeavor. A life of endurance, resolve and unstoppable commitment. Until just after midnight on March 20, he was our North Star.

The body of Martin McGuinness being brought through the Bogside. Image: RollingNews.ie.

No matter how great the challenge or how intimidating the task, he rose again and again. And on every occasion, his integrity and nobility brought his people with him. His every action inspired confidence and courage in others. His humor and big heart got us through the trials of politics. His compassion and kindness emboldened us to reach further and higher.

We admired him as a comrade and leader, of course. But that wasn’t even the half of it. We loved him. In turn, he believed that love would conquer all. Indeed, he went on to prove that as the pre-eminent peacemaker of his time, befriending, in particular, opponents who knew what it was like to have been in the trenches.

McGuinness shaking hands with the Queen of England accompanied by Peter Robinson.

And while his astonishing ability to build bridges did, indeed, win over many hearts, it also meant that when he called time on efforts to turn back the clock, his people rallied like never before.

Today is filled with sorrow, but in time to come, wherever people gather to seek justice, they will take great strength and succor from his memory. And every time his name is spoken he will live again.

And his name will be spoken for a thousand years.