How Martin McGuinness and Bill Clinton made peace in Ireland

“Martin McGuinness grabbed me in a bear hug. “We did it,” he said, referring to the president coming to Ireland.” 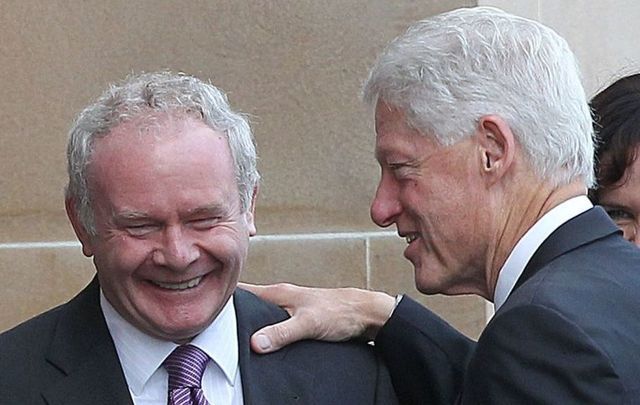 It was November 30 1995 a bright but cold Belfast late afternoon. The packed plaza and streets around City Hall were alive with hundreds of thousands of people.

President Clinton and his wife Hillary were in town on their historic visit. the first ever by a serving American president to Ireland.

Up on stage Van Morrison sang “There Will Be Days Like This.” The crowd roared and chanted in Belfast accents “Bill, Bill, Bill” which sounded like “Bull, Bull, Bull” to some quizzical Americans.

There was no doubt though, history was in the making. Another song came to mind “Bridge Over Troubled Water.” That was what was being constructed this day in Belfast.

I saw Martin McGuinness make his way through the crowd. As it turns out his seat was directly behind mine. Despite the cold he was coatless, a Garfunkel lookalike, edging past crowds of people, everyone trying to grasp his hand.

I’d never seen him so happy. His blue eyes were bright, alive with daring, his handshake exuberant. For centuries, Irish Republicans had dreamed of American intervention to solve Ireland’s problems.

President Bill Clinton and first lady Hillary take to the stage in Ireland, 1995.

Now here it was. President Clinton on stage with Hillary, the crowd went wild. The best speech I ever heard Clinton give in Northern Ireland, drawing on the American civil war and the deep divisions that had to be healed after it.

“I grew up in the American South,” Clinton said. “My forebears were soldiers in the Confederate Army... They lived the experience so many of you have lived.”

And then Clinton recalled the first post-Civil War Arkansas governor, who had fought for the Union.

“We have all done wrong,” Clinton said, quoting a speech the then-Arkansas governor gave to his constituents, who had been split between the two sides.

“No one can say his heart is altogether clean, his hands altogether pure. Thus, as we wish to be forgiven, let us forgive those who have sinned against us and ours.”

Then Clinton drew the lesson.

“America will stand with you as you take risks for peace.”

Down in the crowd directly to the left of the main stage, Martin McGuinness grabbed me.  “We did it,” he said, referring to the president coming to Ireland, “We did it. It will never be the same again.”

Sinn Fein leader Martin McGuinness outside the Dail in Dublin.

He was right of course, a long road without a turning was over. American leaders always steered clear of the North, now here was a president setting a fair course for Ireland and Belfast City Hall in a city that was the ground zero of The Troubles.

Northern Ireland was suddenly on the American agenda. Around the city hall seating were serried rows of congressmen, senators, Irish American supporters. We had all flown through the night on an Air Force plane to be here. All tiredness vanished at the sight of the huge crowd.

As the peace gathered pace McGuinness and his mythic reputation was a huge part of the ability to succeed. Even the hardest dissident balked at crossing him. When the ceasefire almost fell apart and the dissidents almost had the IRA votes to go back to war it was McGuinness, especially, who was held in such high respect that his argument carried the day.

With Americans he was endlessly patient, encouraging, and cajoling. He knew the importance of the American card. He saw it that night in Belfast.

It all seemed a long time away from July 22 1992 when I first met Martin McGuinness. Then it was the Falls Road in a classroom inside a community center. We were five Irish Americans, Congressman Bruce Morrison, businessmen Bill Flynn, Chuck Feeney, Labour leader Joe Jameson and myself seeking to kick-start American involvement in Northern Ireland. We needed Sinn Fein to agree. We were seated in little benches like schoolchildren. 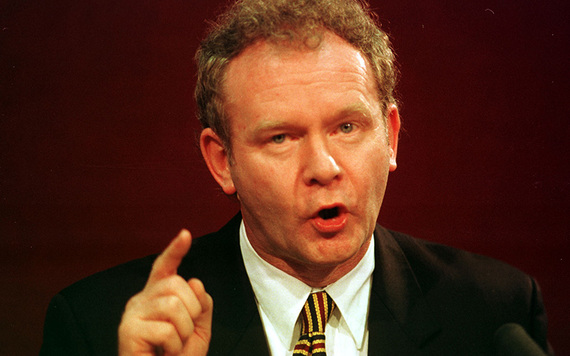 McGuinness on that occasion arrived in a lather of sweat. He had driven from Derry but had been pulled over several times by the RUC. He explained the harassment was nothing new, a fact of life he said. They clearly knew he was coming to this meeting.

What he had to say was brief and very important. The Americans must jump in. He was emotional where Gerry Adams was cool in that meeting, outspoken and direct, where Adams was quiet and composed. The message was the same however, not a blade of grass between them. Bring the Americans in, good things would happen.

In subsequent meetings, I got to know both men, never saw an ounce of animosity between them, always shoulder to shoulder, eventually Martin took the North and Gerry the south with predictable positive results for the party.

In contrast to John Hume who cut a lonely figure on trips to Washington, both Adams and McGuinness came together when needed, their torrid pasts and shared dangers the glue that held their relationship together. Together they ended the armed struggle and put Sinn Fein on a political path, an incredible achievement

I last saw Martin for the last time last year in New York at a small lunch hosted by businessman Bill Flynn. As always, he went around the table asking how we were. He was Deputy First Minister now, but he was utterly unchanged, true to his Republican ideals to the end. When it came to embodying those ideals there was no one finer.

I will always look back on that crisp Belfast night when you could feel the forces of history shift and a new era for all of Ireland begin. I was glad to share it with the great Martin McGuinness.

Today they put him in the ground. Lying flat in the grave he is still taller than almost any other Irish leader.