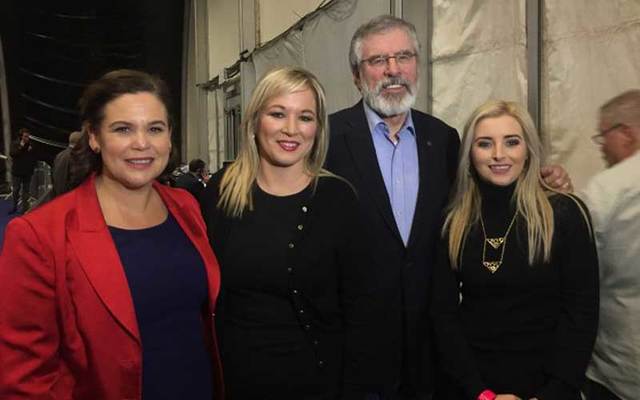 The Northern Irish assembly elections have dramatically changed the balance of power in the North giving Sinn Fein a powerful new mandate after they came within one seat and about 1,200 votes of being the largest party.

The final percentage of first preference votes was Sinn Fein 27.9 percent, DUP (Democratic Unionist Party) 28.1 per cent. Only 1,300 votes out of over 800,000 separated them.

When the Sinn Fein and the SDLP (Social Democratic and Labour Party) votes are combined, the top two nationalist parties polled higher than the combined major Unionist parties for the first time ever.

The numbers throw into large relief the potential for a seismic shift in Northern Ireland politics with demographics and political enthusiasm heavily favoring the nationalist cause.

“It is a vote for Irish unity, a vote for us together as a people,” said Sinn Fein leader Gerry Adams.

The election was called after Sinn Fein withdrew from the power-sharing government after DUP First Minister Arlene Foster refused to step aside during an inquiry into a government-funded clean fuel initiative scandal which may end up costing the taxpayer $500 million. Foster was the minister in charge of the scheme.

Sinn Fein was also furious when a government grant to Irish language activities of $60,000 was blocked by the DUP despite the fact the DUP agreed to fund new instruments for Orange marching bands.

In a bizarre twist, it also emerged that the DUP had funneled money given to them by a shadowy right-wing group into pro-Brexit advertisements in the British media.

Given these revelations, First Minister Arlene Foster began the campaign on the back foot and never got off it.

The nationalist combined seat total was 39 with Sinn Fein at 27 and SDLP at 12 while the DUP and UUP (Ulster Unionist Party) parties reached 38 seats, 28 DUP and 10 UUP.

The DUP failing to reach 30 seats mean they can no longer exercise a veto on legislation which means gay marriage is now likely to pass.

The Alliance Party, which holds a middle ground, took eight seats in a vastly improved performance while five independents were elected.

Adams was conciliatory but firm towards the DUP. “I have talked to the DUP many times,” he told The Irish Times. “They are the same as the rest of us. They are decent enough people. They want good for their kids and so on.

“But they lost the run of themselves. You are living now in a totally different atmosphere. They got themselves in a little bubble. That bubble has been punctured by Martin McGuinness and by others. I don’t want to sound preachy. We should be reflective about this.

“If you are the DUP, you have to realize that you are only going to get limited chances to deal with this…”

The election marked the end of the political career of Sinn Fein Deputy First Minister Martin McGuinness who has been ill and who was replaced by Michelle O’Neill and Mike Nesbitt of the UUP also announced his resignation after his party’s poor showing.

The next step is to see if the DUP and Sinn Fein can agree on the terms of a new joint government alliance which runs Northern Ireland. This is no sure thing as Sinn Fein have insisted Foster stand aside until an inquiry into the heating scandal is carried out and she has refused. The alternative is another spell of direct rule from Britain which neither party wants.