Investigations into "an upsurge in sinister and menacing behaviour in recent weeks" in Northern Ireland are continuing. 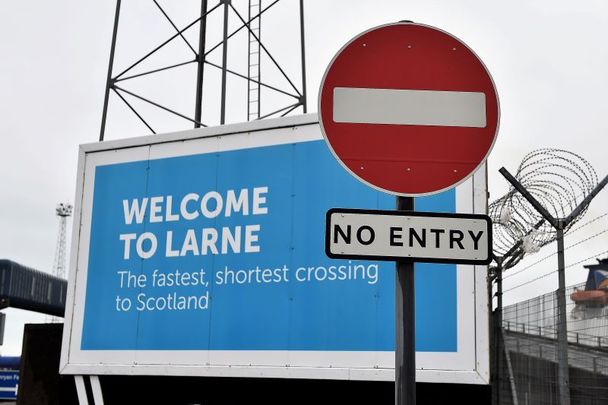 The Northern Ireland Executive has condemned the threats against staff at the region's ports and said "they should be lifted immediately."

In a statement issued on Monday, the Mid & East Antrim Borough Council that it was “immediately withdrawing its staff from inspection duties at Larne Port over concerns for their safety and welfare.”

The statement noted that the Council had 12 Environmental Health Officers attached to the work at the Port, as well as a number of senior Council officers.

The decision, which was unanimously agreed upon by the Council’s Group Party Leaders at an emergency meeting on Monday afternoon and agreed at Full Council, comes after “an upsurge in sinister and menacing behaviour in recent weeks, including the appearance of graffiti within the local area referencing increasing tensions around the Northern Ireland Protocol and describing Port staff as ‘targets.’”

"The ongoing situation has caused extreme distress and worry to staff," the Council said.

The Northern Ireland Protocol, enacted as part of Brexit, keeps Northern Ireland within the EU's customs regime and single market for goods. It is fiercely opposed by pro-British unionists.

Mayor of Mid and East Antrim, Councillor Peter Johnston, said: “We have seen what I would describe as deeply troubling graffiti and a very notable upping of community tensions towards the NI Protocol, particularly in recent days.

“The health and wellbeing of our staff is always this Council’s number one priority and that is why the decision has been taken to withdraw them from their work at the Port with immediate effect until we have very real assurances and full confidence that they can go about their duties without fear, threat or concern for their wellbeing.”

After staff were withdrawn from Larne Port, a spokesperson for Northern Ireland's Department of Agriculture, Environment and Rural Affairs (DAERA) said on Tuesday that it would be temporarily suspending physical inspections of products of animal origin at Larne and Belfast "in the interests of the wellbeing of staff."

"The situation will be kept under review and in the meantime full documentary checks will continue to be carried out as usual."

“We have asked them not to attend their duties today [Tuesday] and we will continue to monitor the situation and adapt accordingly.”

Sky News reports that on Tuesday, lorries arriving at new inspection facilities at Belfast Port were turned around and redirected by Border Force officials.

The Northern Ireland Executive condemned the threats in a statement issued on Tuesday: “Regardless of our very different views on the NI Protocol, the Executive is united in condemning any threats made against workers and staff going about their duties at Belfast and Larne ports.

“As public servants, these staff should be allowed to do their jobs without fear and it is unacceptable and intolerable that threats have been made.

"The threats should be lifted immediately and staff should be allowed to return to their posts and get back to their work.

"There is no place in society for intimidation and threats against anyone going to their place of work."

PSNI's Assistant Chief Constable Mark McEwan, following a meeting with DAERA, local councils, the Department of Justice, the Northern Ireland Office, Border Force, and Belfast Harbour Police, said on Tuesday: “I am concerned about signs of tension within the community in recent weeks. We’ve seen graffiti at various sites and other forms of intimidation on social media. Our investigations into these incidents are ongoing.

"In relation to an anonymous piece of information claiming paramilitary involvement in threats, I have briefed partners that we have no information to substantiate or corroborate these claims at this time. Keeping people safe is our priority and the safety of staff working at points of entry is of the utmost importance to us.

“We will continue to work closely with our partners to provide them and their staff with support. We have increased patrols at the points of entry in order to reassure staff and the local community."