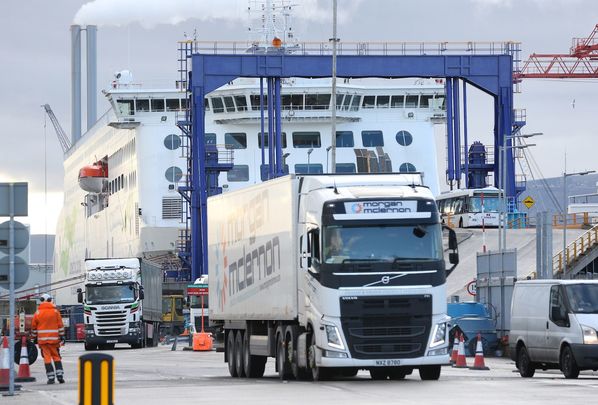 As many as one in three businesses has now stopped transporting their products through Britain, according to a survey by Chartered Accountants Ireland (CAI).
The Irish Examiner reports that "customs paperwork" was the biggest headache for firms, with half of businesses unhappy with the Brexit-related guidance that they had received from the Irish government.

The CAI said that despite a free trade agreement being in place between the EU and the U.K., customs-related administration was continuing to cause lengthy delays for many traders.

CAI public policy lead Crona Clohisey said, "We have all seen reports
of lorries unable to board ferries in Britain due to errors in paperwork, and uncharacteristically, Revenue issued emergency measures to allow businesses to get through the customs system.

"The effect of the border down the Irish Sea, as well as the complexities surrounding the rules of origin, has been keenly felt, with one in three businesses we surveyed reporting that they have stopped shipping goods through Great Britain."

As businesses across the island of Ireland continue to battle trade difficulties, another worrying report has predicted that Britain's economy will shrink as the Brexit trade deal "lacks substance" in vital areas.

The Irish Times notes that the report, from credit ratings agency Moody's, states that "while the Brexit agreement avoids a no-deal scenario, it largely lacks substance in areas vital to the U.K. economy, such as services".
It adds that as a consequence, the U.K. economy will be significantly smaller over the longer term.

The economic difficulties related to Brexit have also resulted in some British suppliers stopping their deliveries to Northern Ireland, which remains part of the U.K. but which has a customs border with Britain.

Growing Brexit-related tensions following the U.K.'s exit from the EU were reflected in a Sunday Times survey that showed a majority of voters in the North want a border poll to be staged within the next five years.

Democratic Unionist Party leader Arlene Foster said a border poll would be "absolutely reckless" at a time when all efforts were focused on defeating the
pandemic.  But unsurprisingly, Sinn Fein Deputy First Minister Michelle O'Neill
welcomed the findings, noting that there was "an unstoppable conversation" underway on the constitutional future of Northern Ireland.