Haulage firms have reported that Brexit backlogs have triggered chaos in the supply chain. 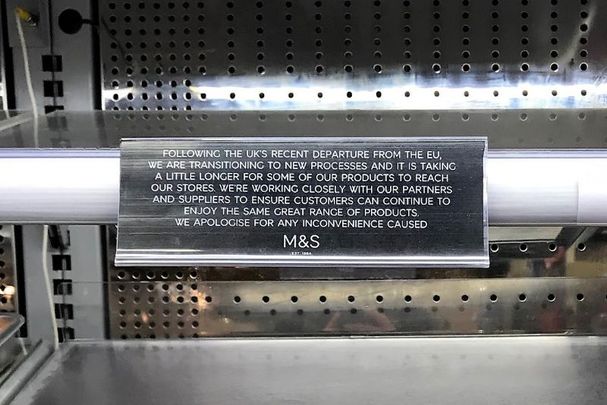 January 19, 2021: Empty shelves in Marks & Spencer in Dublin city, along with a sign from the supermarket chain which explains that supply chains from the UK will be disrupted for the near future due to Brexit. RollingNews.ie

Brexit has been blamed for triggering lengthy delays in transporting goods at Irish ports, with truck firms warning that fresh food shortages could be imminent.

Haulage firms have reported that Brexit backlogs have triggered chaos in the supply chain, with food consignments destined for Irish supermarkets getting blocked in U.K. warehouses or facing prolonged hold-ups at ports.

Hauliers told the Irish Independent that fresh fruit and vegetables, meat, and fish were the food items most at risk.

But they warned that Brexit-related red tape and extra paperwork has resulted in extra checks and delays on deliveries of tinned and canned goods.

The warnings come as leading officials from both Revenue and government departments blamed supply chain issues in the Irish retail sector since the start of the year on "blockages" in Britain and a failure of importers to make adequate preparations for Brexit.

The Irish Times reports that "difficulties" had been noted on the British side in recent weeks during a briefing on Monday on Brexit issues at Dublin Port.

Speaking at the event, Eddie Burke from the Department of Transport claimed some firms had been insufficiently prepared for the post-Brexit challenges involved with exporting products to Ireland.

"I am not saying there are no problems -- there are blockages," he said.

The lengthy delays have come despite a 50 percent fall in freight volume from Britain from the same period last year, a trend that has been attributed to a combination of pre-Brexit stockpiling and Covid-related restrictions.

Volumes of goods are expected to increase in the coming weeks, but a spokesman for Revenue's customs operations at Dublin Port stressed that contingencies were in place to deal with increased traffic.

Meanwhile, motorists in Ireland have been warned that Brexit will add thousands of dollars extra to the cost of a second-hand vehicle, adding almost a third to the price of some of the most popular cars.

Around 100,000 used cars are imported from the U.K. every year.  But the cost, often saving car buyers a sizeable sum, is set to soar by an extra 31 percent, according to a report in the Irish Daily Mail.