The Loyalist Communities Council (LCC) in Northern Ireland has officially withdrawn its support of the Belfast Agreement / Good Friday Agreement. 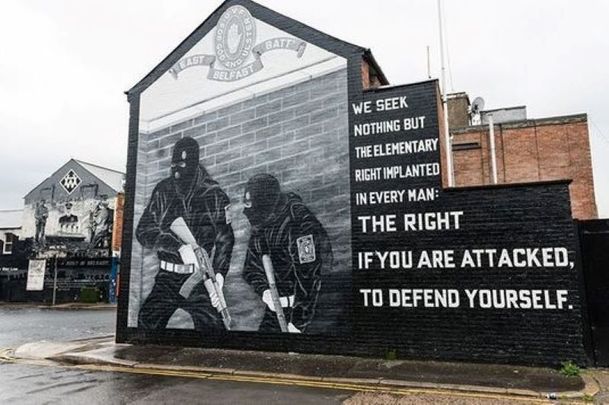 Loyalist paramilitary organizations in Northern Ireland have warned British Prime Minister Boris Johnson that they are temporarily withdrawing their support for the Good Friday Agreement due to concerns over the Northern Ireland Protocol.

The Loyalist Communities Council (LCC), an umbrella group consisting of the Ulster Volunteer Force (UVF), Ulster Defence Association (UDA), and Red Hand Commando, have cited concerns over the Northern Ireland Protocol creating a border down the Irish Sea in the wake of Britain's withdrawal from the European Union.

The groups, who endorsed the historic Good Friday Agreement in 1998 and helped bring decades of violence in Northern Ireland to an end, are determined to bring "peaceful and democratic" opposition to the Northern Ireland Protocol.

Allison Morris, security correspondent and columnist with The Irish News, shared the text of the letter addressed to UK Prime Minister Boris Johnson on Twitter on Thursday:

That LCC letter sent to Boris Johnson withdrawing support for the Belfast Agreement, the language is very different from what we’ve heard previously, this may well be seen as a negotiating tactic but is still a very concerning and potentially destabilising development pic.twitter.com/NYosNysGWT

In the letter, chairman David Campbell states: "I have no doubt that you are aware of the strong feelings in Northern Ireland regarding the imposition of the NI Protocol, but I wish to place on the record the unanimous opposition of all the Groups that are represented by LCC to the Protocol and our determination that it should be replaced."

The letter accuses the operation of the NI Protocol of breaching the objectives of the Belfast Agreement, also known as the Good Friday Agreement.

"The protocol however gives effect to the Irish nationalist position at the expense of the unionist position."

Campbell writes that the EU's Chief Negotiator refused to meet with the group's representatives, and accuses Ireland's Minister of Foreign Affairs Simon Coveney of ignoring their concerns.

"The LCC leadership is determined that unionist opposition to the Protocol should be peaceful and democratic. However, please do not under-estimate the strength of feeling on this issue right across the unionist family."

The letter continues: "Accordingly, I have been instructed to advise you that the Loyalist Groupings are herewith withdrawing their support for the Belfast Agreement and its Institutions until our rights under the Agreement are restored and the Protocol is amended to ensure unfettered access for goods, services, and citizens throughout the United Kingdom.

The letter continues: "The LCC is prepared to play a meaningful role in seeking a workable solution, however, a starting point has to be the acceptance that a hard border of the island of Ireland, or between Northern Ireland and the rest of the United Kingdom, has no cross-community support here and therefore untenable."

It adds: "It must be patently obvious to you that the triggers detailed in Article 16 of the protocol, ie the extreme economic and societal difficulties, now pertain and must be acted on without further delay."

The LCC is expected to send a similar letter to Taoiseach Micheál Martin.

Sir Jeffrey Donaldson, a DUP MP based in Lagan Valley, met with the LCC and said that there was no evidence that the groups planned to use violence to oppose the controversial protocol.

He told BBC Radio Ulster that he came away from his meeting with the LCC with "no sense that loyalist paramilitaries were going to revert to violence in opposition to the Northern Ireland Protocol".

Unionists have voiced fierce opposition to the Northern Ireland Protocol amid fears and concerns over Northern Ireland's position in the UK internal market. The protocol aims to prevent a hard border on the island of Ireland in keeping with the Good Friday Agreement but has increased the volume of red tape associated with moving agri-food from Britain to Northern Ireland.

Boris Johnson has recently announced the extension of a grace period that has been limiting red tape for agri-food coming into Northern Ireland from Britain, drawing fierce criticism from the EU for the unilateral decision.

The volume of red tape is set to increase significantly when the grace period ends, with Northern Irish businesses required to hold EU export health certificates for agri-food products brought in from Britain.